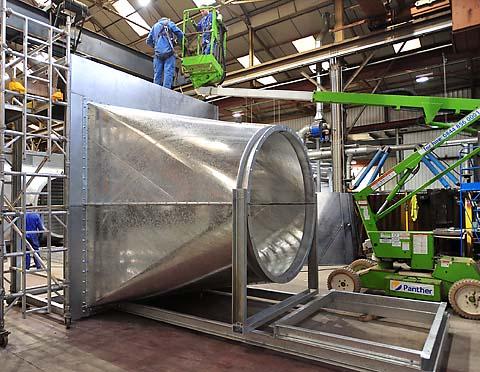 The Highways Agency has awarded a contract totalling £90.4 million for major works at Bell Common tunnels on the M25. Main contractor Costain Plc has awarded the sub-contract for detail design, manufacture and installation of the Saccardo nozzles at the tunnel portals to HVAC ductwork and fire engineering specialist Senior Hargreaves. The Saccardo nozzles replace obsolete jet fans within the 470 metre long tunnels and will inject high volumes of air to disperse harmful gasses and provide smoke control if there is a fire. This is the third Saccardo project for the company who supplied similar equipment to the Thames Tunnels on the High Speed One rail link and to the Holmesdale tunnels on the M25. The Holmesdale contract, also led by Costain, on behalf of the Highways Agency was delivered on budget and three months ahead of schedule.Work began at Bell Common in October and is scheduled to be complete by March 2010. The Costain contract covers all electro mechanical systems, power, lighting, emergency communication, traffic signalling and signage in addition to the ventilation upgrade. With 120,000 vehicles per day passing through the tunnels, considerable delays could arise from poor lighting, failed communication or lane closures for unscheduled maintenance. The Saccardo nozzles comprise a wedge shaped chamber terminating in a thin slot in the tunnel roof. Air is rammed into this chamber by high powered fans. As the air emerges at high velocity into the tunnel it entrains further air from the tunnel entrance. This creates a positive air flow that follows the normal traffic stream. Under normal conditions traffic flow through the tunnels will be sufficient to ensure adequate ventilation. However, should traffic through the tunnels be slow or static, the system will operate at reduced capacity to inject fresh air and ensure that there is sufficient airflow to dissipate fumes and carbon monoxide. If there is an emergency, such as a fire in the tunnel, drivers ahead of the incident can drive out of danger. Drivers and passengers in traffic backed-up behind the incident will be protected by the injection of high air volumes to drive smoke away from them to allow for their safe evacuation. Detailed design of the environmental and emergency ventilation was by Capita Symonds. Mouchel developed the outline design for the Saccardo ventilation and as the management contractor will be supervising the project on behalf of the Highways Agency. The high capacity fans required have been supplied by Fläkt Woods. The site programme completion date is by Spring 2010. To meet this stringent deadline, Hargreaves is prefabricating major elements of ductwork at their Bury factory so that these can be craned into position. High/low resolution images are on the web at www.ainsmag.co.uk/ha166/4639ha1a_saccardo_nozzles.htmSenior Hargreaves is the UK's largest ductwork manufacturer. They produce over 4,000 tonnes of HVAC ductwork each year for a diverse range of construction applications. The HFD range of fully tested fire resistant ductwork is designed for smoke extract and ventilation in fire engineering projects, where safe evacuation of people is vital.Millions of people in buildings such as the Nat West Tower and Minster Court in London, and in venues such as the ICCB in Birmingham and Wimbledon's No.1 Court, are assured comfort and safety by Senior Hargreaves ductwork.Phil Johnson, Senior Hargreaves, Tel. +44 (0)161 764 5082 Fax. +44 (0)161 762 2336 E-mail: pr@senior-hargreaves.co.uk Web: www.hargreaves-ductwork.co.uk Senior Hargreaves, Lord Street, Bury, Lancashire BL9 0RG, UK