The Internet is down and it’s not my fault. 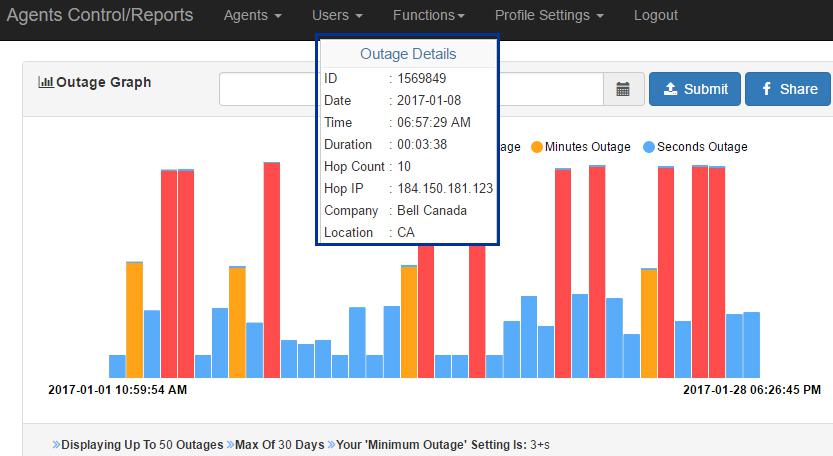 NutPile Networks creates software that eliminates hours of frustrating tech support calls, gives users proof of what is happening with their Internet connection.PRESCOTT, AZ – How many times can you reboot a router before you give up in frustration? That’s the question Mike Paradis, NutPile Network’s creator, asked himself a few years ago. Despite paying for an expensive business package with a local cable Internet provider, he found himself spending hours on the phone with technical support, trying to figure out if the problems were with his equipment or if the cable provider was having network issues. Each call started the same way. The support person would tell him he couldn’t see any network issues and then lead Paradis through basic reboot procedures, with the same result. The Internet was still down.“I was growing incredibly frustrated,” Paradis admits. “I’ve been a network administrator for almost 30 years. We ran our own mid-sized ISP in the late 1990’s and currently host a small data center, so I know how to troubleshoot a connection. We would regularly call tech support, run through all the troubleshooting, only to be told the problem was at our end, or worse, they didn’t see anything going on at all. I could see that the issues were not with my equipment, but if I didn’t do exactly what they said and follow their basic steps during the phone call, they would not escalate me to the next tier of tech support. After multiple calls and trouble tickets, they would eventually discover something was going on with their infrastructure and dispatch a technician to fix it,” he added, “but not until I had spent hours on calls with them. Worst of all, our web and voice-over-IP customers were suffering and blaming us for their issues.”Paradis created NutPile Networks to put an end to the finger pointing he finds is all too common between Internet providers and their customers. “Whether you are a home user, a small business or a large company, you deserve to get the Internet you’re paying for,” he said. “NutPile gives you the tools to show your Internet provider what is happening to your connection, erasing any questions about outages and downtime caused by their network or their upstream providers.”NutPile Networks software can monitor and track how your Internet is performing, with web-based reports that let you drill down into the details or just get the big picture. The basic software is free to install and use for monitoring. Detailed graphs and web-based reports are available for a low monthly subscription. An optional small router offers a hardware solution to customers who want to make sure they have 24/7 monitoring without leaving their computer turned on all the time.Paradis hopes everyone will give NutPile Networks a try, whether they use the free subscription or pay for the more detailed graphs. “NutPile helps us paint a picture of how the Internet is working. The more people we have running it, the clearer and more detailed the picture will become of what’s going on, not only with your local provider, but the national Tier 1 ISPs too.”He believes NutPile users could positively impact the industry by exposing connectivity problems providers are having. “Imagine as a customer, calling your local Internet company and informing them you can see Century Link is having a problem in your service area and what are they going to do to fix it? Or asking for a credit because you can prove you have been having daily outages on your connection and can also send them a report showing which of their upstream providers were having problems during the outages.” Paradis thinks well-informed customers could change the way providers support and respond to outages. “It’s empowering to have data and details to back it up. Imagine never having to waste your time rebooting your router just to prove your Internet is really down.”NutPile offers comprehensive solutions to monitor internet services for connectivity and performance. Reports show details such as frequency, length, average times of outages, average latency, fully automated speed testing, historical data and much more. Users can select to be notified of outages in a 24hr period or instantly to ensure they can react promptly to any issues that may arise. NutPile offers free and paid versions of its software along with an optional hardware device for always-on monitoring.NutPile Networks Box 12454 Prescott, AZ 86304 Contact: Mike Paradis  Phone: 480-900-8025

You can edit or delete your press release The Internet is down and it’s not my fault. here

10-01-2018 | Logistics & Transport
Philadelphia Scientific
The Internet of Things
Everything is smart these days; smart phones, smart cars and smart appliances, and these devices are becoming commonplace. Just look around your own home! They’re examples of smart technologies and come under the term ‘the Internet of Things’. This refers to the network of items that are interconnected and exchange data which is useful in all parts of life. The IoT also offers a lot of benefits to businesses, helping
04-25-2012 | Business, Economy, Finances, B …
Almuth Hauptmann-Gurski
Pirates on the internet
Adelaide, South Australia - 24th April 2012 - Internet piracy causes author Ally Hauptmann-Gurski to tear out her hair. The German-Australian novelist published her historical novel about Russian Gypsy singer Nadezhda Plevitskaya on amazon.com but promply found unauthorised offerings in digital formats on a site in Dubai. The illegal offer even had a nice blurb, saying the New York Times highly praised the novel 'La Plevitskaya'. 'The text read well
09-29-2011 | IT, New Media & Software
ipoque
ipoque Launches Internet Observatory
Comprehensive live Internet statistics show worldwide traffic patterns in real-time Leipzig, 28 September 2011 – ipoque, the leading European provider of Internet traffic management solutions, today announced the launch of its Internet Observatory – the Internet’s new spot for real-time Internet traffic statistics from all over the world. Internet Observatory is the successor of ipoque’s Internet Studies, which have been a reliable source for traffic information ever since they were
03-09-2011 | Business, Economy, Finances, B …
WSI Corporate
WSI Internet Franchise
-WSI Salutes All Veterans and Believes in Investing in America- Toronto, Ontario, March 4, 2011… Since beginning The Investing in America campaign in August 2010, WSI continues to be presenting US-based military veterans the opportunity to choose a WSI marketing business for a substantially discounted charge with the mandate that they “pay it forward” by giving back to their hometown communities through numerous charitable performances. As a result of this
02-20-2006 | IT, New Media & Software
Internet Optimizer
Internet Search Engine Optimizer
Top 10 Search Engine Optimizer is a proven tool that helps you to get top 10 rankings in Google, Yahoo and all other major search engines. How to optimize your website for Google: How to achieve that ranking and how you must change your web pages to obtain a similar ranking. Why you need to analyzes the top 10 ranked web pages for your keyword on the search engine of your
01-13-2006 | Advertising, Media Consulting, …
Hansen Connection
Internet Marketing Tool Success
Affiliate Guru, Russell Brunson, has developed a new marketing tool to help build his Affiliate Empire. In the world of Internet Affiliates, Russell Brunson is a name that stands out in the crowd. Russell just graduated from college this past spring, but he was already making a very good income from internet affiliate programs before graduation. Russell has also been very successful with his internet marketing.
Comments about openPR
OpenPR is clearly structured and remains true to its principle of confining itself to the essential parts. OpenPR has proven to be a very good and reliable partner to our media agency: Within the shortest time the releases are online and go down well with the media representatives. The success of OpenPR is reflected in the steadily increasing number of press releases. It is good that OpenPR exists!
Ursula Koslik, Director Marketing & PR, F+W Hamburg