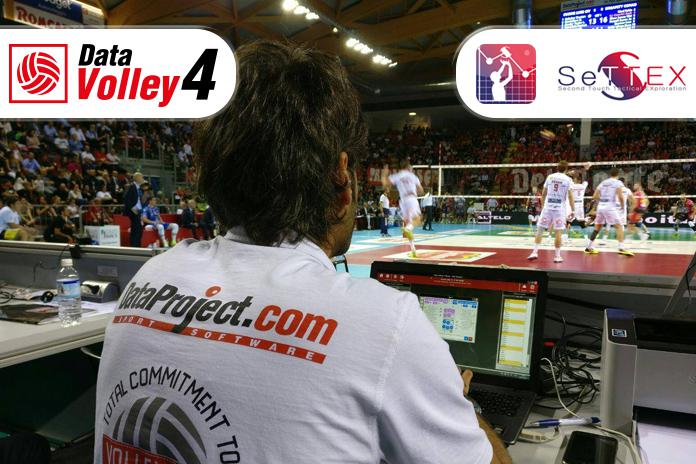 Data Project, world leading company in providing volleyball software, now allows certain selected apps to communicate with Data Volley, the market-leading tool for statistical scouting and video, enabling users to get different levels of information and analysis. The first app is Settex by Moxoff, which thanks to its advanced mathematical core, tracks the setter and assists the coach in real-time. The newly released Data Volley 4 Professional is having outstanding success. Thanks to three-decades of experience in technologies applied to volleyball, Data Project won’t stop astounding, by offering a vanguard product which is considered to be the key software, for every coach at every level, in the volleyball world.Many features have been introduced in the new version. The Player App being the latest and welcomed with great enthusiasm by software users. It is available for PC and tablet for the Windows, iOS and Android operating systems; the App is essential to allow staff to easily distribute to players video analysis of the match.Another big news is about the decision of Data Project to open its data gathering platform to external developers. It is now possible for certain selected apps to connect and communicate with Data Volley, enabling users to have access to different levels of information and analysis.The first application connecting to Data Volley is SeTTEX Premium, the new release of the revolutionary app, which thanks to its advanced mathematical core, tracks the setter and assists the coach in real-time by suggesting the best tactics for the game. SeTTEX (Second Touch Tactical Exploration), developed by Moxoff, a spin-off of Politecnico di Milano, specialized in mathematical modelling, simulation and statistical analysis, is directed towards coaches, analysts, managers, staff and players. Data Volley allows SeTTEX to have real time access to the data collected by the scoutman (without any interference with data gathering) in order to provide the user with an automatic, realistic and immediate picture of what is happening on the court with no need to keep track on-screen of where the ball is touched. Moreover, its innovative Virtual Coach function, the key feature of SeTTex, monitors the opponent setter and highlights the behaviours that can be exploited to gain advantage on the opponent team.SeTTEX can even be used before a match as well, to synthetize information on opponent’s historic data and to filter relevant behaviours to communicate to players.More info here --> goo.gl/rFJZPZ and here --> goo.gl/tJCvHoAbout Data Project: Data Project is the world leader in providing top-level volleyball software and services. The Italian-based company’s total commitment to volleyball software development has been the heart of the business for more than 30 years, enabling Data Project to achieve international notoriety for its integrity reliability and expertise. Data Project’s software Data Volley is the market-leading tool for statistical scouting and video analysis, used by major volleyball national teams and clubs worldwide. Over the years, Data Project has developed a wide range of tools and services that are now essential to the largest volleyball organisations including e-Scoresheet software and Video Check (the instant replay system) for improving the accuracy of on-court decisions. Presence, proficiency and high-level customer support are the key pillars behind Data Project’s success, placing the company at the forefront of volleyball software engineering.About Moxoff: Moxoff is a SME spinoff of the Politecnico di Milano founded in 2010. Moxoff business model is based on the ability to effectively transfer technology and know-how from the world of research to the world of industry. Applying mathematical modelling to solve complex industrial problems, Moxoff provides cutting edge solutions to industrial knowledge requirements, and to develop customized software at customers' disposal for their business. Moxoff transforms the results of academic research into software tools and services that can be used in a reliable and effective way in the industry sector, even by non-mathematicians.Data Project S.r.l. via dell'Elettricista 10, 40138 Bologna (IT) Emanuela Giordani Cioffi Marketing & Communications press@dataproject.com

08-22-2017 | IT, New Media & Software
Data Project s.r.l.
Data Project releases NEW features for Data Volley and the new LITE version
A summer full of news from Data Project, the world leader in volleyball software, thanks to the latest release of Data Volley, the most used statistics and analysis software in the world. The new LITE version has now been released, allowing coaches of all levels to get detailed analysis at a low cost. Data Volley 4 is newly updated today. In addition to optimizing the scouting performance that has always made
03-01-2017 | Sports
Data Project s.r.l.
Essential Stats Volleyball: the free app to start scouting
“We want to offer custom-made product to all the people who need or just desire to learn more about volleyball, increasing a passion which is also ours”: with these words Data Project introduced Essential Stats, the free app for Android dedicated to those who want to make their first simple steps into the scout and statistics world. The app allows to collect and analyse simple statistical data of a match
09-16-2010 | IT, New Media & Software
Data Project s.r.l.
Jumping into the Volleyball future
Data Project is pleased to be organizing a Free International Workshop for coaches, staff and scoutmen On Saturday, October 9th 2010 from 9.30 am to 12.30 pm at the hotel ‘’Shangri La Corsetti’’ in Rome, Viale Algeria 141; a few minutes from the Palalottomatica Arena, the venue which will host the Men’s Volleyball World Cup finals. The Workshop has been organized to offer training and discussion with people involved in the sport

08-22-2017 | IT, New Media & Software
Data Project s.r.l.
Data Project releases NEW features for Data Volley and the new LITE version
A summer full of news from Data Project, the world leader in volleyball software, thanks to the latest release of Data Volley, the most used statistics and analysis software in the world. The new LITE version has now been released, allowing coaches of all levels to get detailed analysis at a low cost. Data Volley 4 is newly updated today. In addition to optimizing the scouting performance that has always made
04-20-2017 | Business, Economy, Finances, B …
Ken Research Pvt Ltd
Branding Led by Sports Events Sponsorships Beckoning Global Volleyball Industry- …
In the sports business, the volleyball industry is set to record a huge growth, as volleyball is gaining popularity in new regions across the world. One big push for the volleyball industry has come from the introduction of various national and international leagues around the globe. Research Report on “Global Volleyball Industry Situation and Prospects Research report 2017” predicts a decent growth by the volleyball industry, based on a number of
03-21-2011 | Leisure, Entertainment, Miscel …
The Scott Organization
1st annual Blue Moon Mountain Bluegrass Festival announces ALL STAR line up
Prestonsburg KY - Blue Moon Mountain Bluegrass Festival The Scott Organization announces the 1st Annual Blue Moon Mountain Bluegrass Festival at Prestonburg Equine Center at Stone Crest July 27th-July 31st. This five day family event will be celebrated in the year of the Father of Bluegrass Bill Monroe's 100th Birthday anniversary. The hills of Eastern Kentucky will be resonating with banjos, mandolins, fiddles and harmonies of the awarding winning artists such
02-01-2011 | Leisure, Entertainment, Miscel …
Phuket Ocean Villas Co. Ltd.
Phuket Gay Pride Festival - Patong Beach, Thailand
Phuket, Thailand: Gay tourists are set to descend on Phuket, Thailand in large numbers next month as the tenth annual Gay Pride Festival returns to the Island on February 23rd 2011. The first Phuket Gay Pride Festival was held in 1999 and it was an instant hit with locals and tourists alike. The four day event is organised by the local lesbian, gay, bi-sexual and transgender community, with Patong Municipality and local
12-22-2010 | Business, Economy, Finances, B …
Kalra Realtors
3C Lotus Panache Noida, 3C Lotus Panache Sector 110 Noida, Call 9818697476
The 3C Company comes with affordable new residential apartments in Noida. 3C Lotus Panache Noida offers 2, 3 and 4 BHK flats in Sector 110 Noida. 3C Lotus Panache Sector 110 Noida contain all the great amenities like Swimming pool, Gymnasium, Lawn Tennis Court, Multi Utility Sports Hall, Volley Ball Court, Basket Ball Court, Badminton Court, Skating Rink, Rock Climbing Wall, Squash Courts, Kids Play Area 24*7 powers back up,
05-22-2008 | Sports
Castrol UK and Ireland
European Football Championship 2008: Chopping and changing
The axe continues to fall – but there’s a surprise return for three veterans while two coaches heed the advice of the Castrol Index... Five becomes four France coach Raymond Domenech has played Juventus striker David Trezeguet five times since the 2006 World Cup, but that won’t become six this summer. Trezeguet - third on his country’s all-time list behind Thierry Henry and Michel Platini with 34 goals – has lost out
Comments about openPR
OpenPR ist the nicest and most clearly laid out PR platform I have seen to this day. The press releases are displayed very nicely and clearly and without any unnecessary frills. The updates are fast and the finished release looks appealing and is clearly legible. Even with 16 years of experience one discovers new things from time to time. Congratulations!
Gabriele Ketterl, Director Marketing & PR, Menads