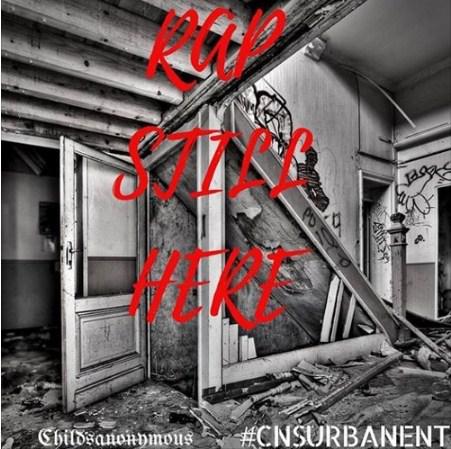 Rap and hip hop musician Childs aka ChildsAnonymous has released his new debuted music collection in soundcloud. Being a lyricist, he has introduced versatility through various flows in his music. His new album “Rap Still Here” is complied with eighteen superb rap music tracks. the dope lyrics have won the hearts of thousands. Soundcloud has gifted this rockstar with a good number of friendly-ears. “Rap Still Here” is not only out in soundcloud, but also, it has gathered huge response from the listeners in a short period.From political to practical situation – everything you can found in ChildsAnonymous’ songs. Moreover, this artist produces songs for everyone, and therefore, from men to women everybody gets pleased with his musicality. ChildsAnonymous engages his listeners with lyricism as well as commercial songs. He is releasing back-to-back new tracks under the label name “CNSURBANENT”. ChildsAnonymous has grown up his interest for rapping from childhood. He has good experience in battle rapping in BET and MTV.Songs in “Rap Still Here” are worth praising. Rap music enthusiasts must listen to “Drunk and High”, “Tried”, “Barz R Us Freestyle”, “Tear freestyle Prod By Night”, “No Way Out”, and “See You Again” etc. The intensity of rap, drum beats and snappy snares will make you stay tuned for long hours. ChildsAnonymous has incorporated an extraordinary symphony in his music that anybody will love to feel. He has already become a famous one amongst the youth music enthusiasts.He has a different kind of vibe that overwhelms the hip hop music lovers. The songs of ChildsAnonymous are very inspirational and motivating. The magnetic rhythm will enlighten you as well. Apart from soundcloud, fans can get connected to this rockstar through twitter and instagram. Also, one can enjoy his music videos in youtube. ChildsAnonymous wishes to top the soundcloud music industry with his excellent and unique rapping style.To listen the music, Please click the following link:https://soundcloud.com/childsanonymous/sets/rap-still-hereWe at Music Promotion Club have helped various artists, musicians, lyricists and many others with Soundcloud Promotion. To promote your music and get an entry into the esteemed music industry, soundcloud promotion is very effective. We manually do all the Promotions via our dedicated team and guarantee you to be able to show results after an week of promotion.Music Promotion Club India West Bengal Kolkata- 700040 5/10 A Netaji Nagar info@musicpromotion.club

03-14-2019 | Business, Economy, Finances, B …
Global Market Insights, Inc.
What's driving the Neotame Market Growth? The NutraSweet Company, J.W. Childs As …
U.S. neotame market size, with food & beverage industry growth in U.S. and Canada, occupies a significant regional share. The U.S. packaged food market was over USD 335 billion in 2014, retail stores expansion coupled with increase in consumer purchasing power are major reasons to drive regional demand. Global Neotame Market size will be stimulated by the increasing preference for low-calorie foods and beverages, due to rise in health consciousness among
08-18-2017 | Media & Telecommunications
Home Town Media GmbH
AustrianStartups Elects New Board Member, Margaret Childs, founder and CEO of ME …
Vienna, 18 August, 2017- CEO and Editor-in-Chief of METROPOLE-Vienna in English, Margaret Childs, was elected to the board of AustrianStartups, and is currently the only female member of the board. Markus Raunig, the managing director of AustrianStartups announced Childs’ election to the board at the 49th Stammtisch of AustrianStartups on August 16. Raunig introduced her to the crowd, “She has the entrepreneurial experience of building up a publishing company here
06-08-2017 | Leisure, Entertainment, Miscel …
Music Promotion Club
“Who We Are” By Childs Anonymous Is A Mind-Blowing Song
Hip hop and rap is a tremendous music genre with many distinctive tunes and thumping beats In Soundcloud, it can be effortlessly listened as this social media site houses a few performers and artists around the world. Hip hop and rap music came into the scene during 1970's as a violent and aggressive kind of music. But it has evolved now with super-cool tunes. Presently, in soundcloud, there are many hip
05-26-2016 | IT, New Media & Software
Letstrak
Your Child Life Can Be Saved With a GPS Tracking Device for Children
Your Childs Life Can Be Saved with a GPS Tracking Device For Children As a parent it is but natural for you to be worried about the safety of your child. Irrespective of the fact that your child is in the park school or at home you will obviously want to keep a track of your kids and only in this way will you be relieved. When you know that
06-10-2011 | Business, Economy, Finances, B …
Interlink Global Messaging
IGM Offers Worldwide SWIFT Message Services
Interlink Global Messaging offers worldwide SWIFT messaging services for banks, financial institutions, securities broker dealers, and more. Walnut Creek, CA – Interlink Global Messaging (igmswift.com/), a leading SWIFT message service provider, offers SWIFT network resources for a variety of financial institutions worldwide. IGM’s services offer financial institutions the ability to connect and exchange financial information securely over the SWIFT network. This enables financial companies to offer a wider range of services
01-19-2011 | Business, Economy, Finances, B …
High-Frequency Traders
Online High Frequency Trading Buyer’s Guide Launched
HighFrequencyTraders.com, the high frequency trading resource, today announces the launch of the first stage of its online buyer’s guide to aid the procurement of high frequency trading solutions. The guide, the first of its kind, will allow users to research relevant vendors who provide solutions to execute high frequency trading strategies. Jonathan Childs, Commercial Director commented “Our aim is that the guide will become an integral procurement tool for firms already
Comments about openPR
I can't but agree to the positive statements about your portal: easy to use, clear layout, very good search function, and quick editing!
Jens O'Brien, Borgmeier Media Communication