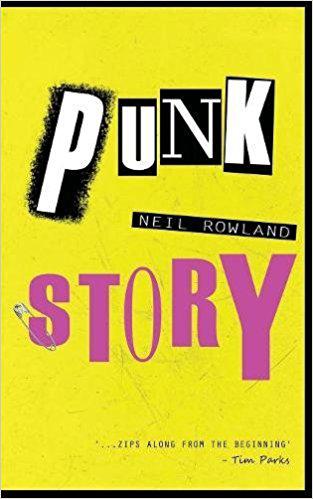 ISBN #978-1785386695“Punk Story” by Neil Rowland is publishedFor original punk rockers, this book puts you back there amongst itAbout the Book:1977, Silver Jubilee year and the punk movement is breaking out among British youth, spreading moral panic. Paul Bottle and friends are just leaving college, when he is seduced by the vibrant punk scene and suddenly his life begins. Next door neighbour Stan forms his own band, Mortal Wound and gigs and new music explode around them. When EMI offer a record contract to the best local punk group, furious competition breaks out among all the rivals. A ruthless ‘Battle of the Bands’ contest ensues that summer.If you were an original punk - or a younger person interested - this book puts you right back there among it. In a gripping, often hilarious, sometimes touching story, the music, the whole period and - most importantly - the brilliant people - are brought back to us. We feel the social pain and desire that fuelled the whole phenomenon, generally amid times of economic hardship and political conflict. Most of all we feel the energy and excitement and hilarity.Excerpt from the Book:“This is a story about friendship, a punk band and the thrill ride of music. Music and style, arts and rebellion, identity and growing up, that's where it began. Shock waves proved something seismic was about to happen in the UK. Until punk came along school friends would drag me into town to bad clubs with terrible soundtracks. I'd put on my check sports jacket and flared trousers. Local girls in home-sewn hot pants would either ignore me or give a jump of alarm. They left me under a plastic palm tree at the edge of the floor, incinerated with embarrassment.”About the Author:Neil's trademark style is a mix of humour, suspense and intelligence. The novels entertain, fire the brain cells, bring frequent smiles and certainly keep the pages turning and turning. This writing avoids formulas and cliches like dull Sunday afternoons. Pleasure guaranteed. Discover something new and exciting, often exhilarating and cutting edge.Neil Rowland began his writing career as a teenage music critic for Melody Maker, Blitz and other publications. This put him into eye-contact with a trained to kill Doberman Pinscher at a rock's star's pine shaded Jacksonville home: among other 'adventures'.Punk Story by Neil Rowland is available in paperback from Amazon at:https://www.amazon.co.uk/Punk-Story-Neil-Rowland/dp/1785386697 This novel is also available to download as an e-book from Amazon at:https://www.amazon.co.uk/Punk-Story-Neil-Rowland-ebook/dp/B0711ZLB3H Press/Media Contact Details:Andrews UK E-mail: info@andrewsuk.comAndrews UK is a professional publishing company in England.Third Floor The Hat Factory 65-67 Bute Street Luton LU1 2EY

12-04-2020 | Arts & Culture
BookBuzz.net
Poet, Writer & Philosopher Neil David Chan Releases Book - A Higher Conversation …
Poet, Writer & Philosopher Neil David Chan Releases Book - A Higher Conversation- Another Way To Be Human Poet, Writer & Philosopher Neil David Chan is pleased to announce the release of his new book, A Higher Conversation- Another Way To Be Human. Released by Austin Macauley in August 2020, the book is already receiving rave reviews from readers and reviewers. “Your journey in life is not complete until you make
04-13-2012 | Industry, Real Estate & Constr …
Re/Max Alliance Group
Neil "Mark" Attar Joins RE/MAX Alliance Group in Sarasota, Florida
SARASOTA, FLORIDA – Broker-Associate Neil “Mark” Attar has joined the Webber Street Office of RE/MAX Alliance Group. He has more than 30 years of real estate experience locally and in Ontario, Canada. A new home specialist, Attar has 20 years of experience with new home builders, earning the Platinum Million Dollar Circle Award from the National Association of Home Builders and the President Circle Award from U.S. Home Corporation. Attar earned his
09-28-2011 | Business, Economy, Finances, B …
WaterhouseResearch.com
Neil Waterhouse Illustrates Data Collection Method from the Laboratory
Sydney, September 29, 2011: Neil Waterhouse, a consummate businessman and well known coach for eBay, has revealed the much sought-after data collection process from his laboratory. He has launched a video which illustrates a sample of data from the lab, thus informing viewers about how to search for profitable products on eBay. The primary aim behind launching the video is to make the data collection process transparent to those looking
09-22-2010 | Leisure, Entertainment, Miscel …
Kaboom Radio
Kaboom Radio News Confirms Neil Peart Has Won Presitgious Drummer Of The Year Aw …
Kaboom Radio News has confirmed that Neil Peart, for a fourth straight time, has won “Drummer Of The Year.” It was a very tight race with Peart winning over Travis Barker by just six votes. It’s reasonable to assume that Peart’s lucky number is 6 since he can play in 6/6, 6/8, 6/24 and so on. Over the last three years, Peart’s performance has been somewhat of a controversial subject. It’s
10-14-2009 | Science & Education
Bulgaria PR Office
Neil Armstrong is represented for his speaking engagements by CSA Celebrity Spea …
Sofia, Bulgaria – Neil Armstrong, The First Man on the Moon and an icon of the 20th century is represented for his speaking engagements by CSA Celebrity Speakers. Neil Armstrong was involved in various space program firsts, including commanding the Gemini 8 flight in 1966 when he performed the first successful docking of two vehicles in space. “Neil Armstrong draws upon the lessons he learned and shows companies the need to
05-08-2008 | Business, Economy, Finances, B …
Trainer1
Neil Lasher advises the Open University on instructional design
Instructional design (ID) specialist, Neil Lasher, is conducting a series of courses in ID techniques for the Open University (OU)’s editorial staff and design team, which includes people who are creating the OU’s e-learning materials. Traditionally, OU lecturers and other subject matter experts have created curricula and courses and then the OU’s editorial designers have produced the resulting learning materials. These materials have been largely paper and DVD-based – with
Comments about openPR
We publish our press releases on openPR.de because we like people who are "open" - just like us.
Frank Obels, CEO, INCONET - Informationssysteme, Communication und Netzwerkberatung GmbH