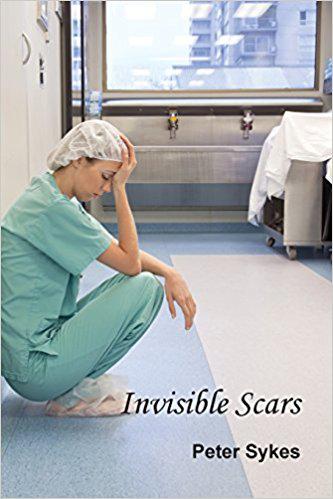 ISBN #978-1787195516“Invisible Scars” by Peter Sykes is publishedWill Paul and Kate’s marriage survive the stresses of their hospital work and their past traumas?About the Book:Whilst Paul and Kate work alongside each other as doctor and nurse on the surgical ward, strains in their relationship emerge. And when Kate's baby dies and Paul's inexperience costs lives, doubt and despair hang in the air and their marriage appears to be doomed.However, in a dramatic turn of events, Paul saves the life of a critically ill patient and Kate is finally able to bid an emotional farewell to the child she has lost.Will their marriage survive the stresses of their hospital work and their past traumas?Excerpt from the Book: Sir William, the surgical consultant, paused a long time before speaking. “Knowing that your husband has had a vasectomy, I wrote to the Inverness Hospital where you were treated and asked for a copy of your notes. The gynaecologist there was in no doubt about it. He was convinced that you were pregnant. He was equally certain that you then had a miscarriage.” Again Sir William paused, all the while watching his patient. For the first time there was a flicker of alarm on Mrs Cullen’s face. And as Sir William allowed the pause to drag on, the hint of concern became a look of panic. Eventually Sir William continued. “However, perhaps unwisely, they did not confirm the diagnosis by sending any tissue to the laboratory. There was no analysis of the contents of the womb.” "So what does that mean?" Mrs Cullen asked hesitantly, a mouse trapped in a corner, desperately looking for a way to escape. "It means that they never actually proved that you had a miscarriage. It is just possible that they made a mistake."About the Author:Peter Sykes served as a consultant surgeon for 25 years, later becoming the medical director of an NHS Trust, winning a ‘UK Medical Management Team of the Year’ award. During the final three years of his career, he was involved at a national level in the control of quality of surgical services.Peter’s first novel The First Cut was published in 2011. It described Paul Lambert’s medical misadventures as he was thrown, bewildered and unprepared, onto a busy surgical ward as a newly qualified doctor.This was followed in 2013 by Behind the Screens which tells real-life tales at a time when care and compassion ruled supreme in British hospitals. Some of the stories are humorous, some sad, others poignant, but all are very ‘human’. The novel also follows Paul’s chequered love life and unveils some of the ‘high jinks’ that doctors get up to when off-duty.Peter’s third novel First Do No Harm was published in 2015 and is set against industrial action that beset the NHS in the 1970's, as the normal healthy camaraderie of the City Hospital is lost and the dispute sets nurse against nurse and doctor against doctor.‘Invisible Scars’ is available in paperback from Amazon UK at:https://www.amazon.co.uk/Invisible-Scars-Peter-Sykes/dp/1787195511This novel can also be downloaded in e-book format from:https://www.amazon.co.uk/Invisible-Scars-Peter-Sykes-ebook/dp/B075PCC9XM Press/Media Contact Details: New Generation Publishing Tel. 01234 712 064 E-mail: info@newgeneration-publishing.comNew Generation Publishing is a professional publishing house in England.107-111 Fleet Street London EC4A 2AB

06-15-2016 | Politics, Law & Society
McIntyre Thanasides Bringgold Elliott Grimaldi & Guito, P.A.
New Hire: Attorney Peter Hobson
TAMPA-FL (June 10, 2016) Peter J. Hobson is the newest attorney at the law offices of McIntyre Thanasides Bringgold Elliott Grimaldi & Guito, P.A., who will be bringing more than 30 years of experience to the firm. Mr. Hobson was called to the bar in the state of Pennsylvania Bar in 1981 and then Florida in 1983. His legal practice includes trial law, family law, commercial litigation, criminal defense, sports
02-24-2011 | Leisure, Entertainment, Miscel …
Sold Out Ticket Market
Peter Gabriel Tickets for Peter Gabriel New Blood Tour 2011
Peter Gabriel, born 13 February 1950, is an English singer, musician and songwriter who rose to fame as the lead vocalist and flautist of the progressive rock group Genesis. After leaving Genesis, Gabriel went on to a successful solo career. More recently he has focused on producing and promoting world music and pioneering digital distribution methods for music. Gabriel was also awarded the Polar Music Prize in 2009 and inducted
11-26-2010 | IT, New Media & Software
ABAS Software AG
Peter Walser, CTO of ABAS Software AG
Karlsruhe, November 26th, 2010 - Peter Walser has been the Chief Technology Officer of ABAS Software AG since 2007. His rise to the top at the software provider in Karlsruhe was gradual but continuous. In 1983 the computer scientist got to know the company as a student. The foundation for the upgradeable business software had just been laid when he started working in development after finishing his degree. The objective
08-31-2010 | IT, New Media & Software
ABAS Software AG
Peter Forscht, COO of ABAS Software AG
Karlsruhe – For every chronobiologist dealing with the mechanism of the genetically programmed circadian rhythm and its adjustment to the daytime structure of its environment, Peter Forscht would be a good research object: just as others take the subway to go from work to the gym and then back home, he constantly travels back and forth between continents. This is an ideal characteristic to establish the international abas network. Do you
03-15-2010 | Fashion, Lifestyle, Trends
Best Friend’s HOME
Luxury German doghouses on Blue Peter
Paderborn, Germany February 2010 The Paderborn, Germany based label Best friend's HOME builds luxury and exclusive doghouses. After receiving lots of positive press worldwide the BBC invited the young company to their traditional family programme “Blue Peter“ to present two of their doghouses. In the show that aired on the 17th of February, Golden retriever Lucy and Blue Merle Border Collie Mabel immediately fell in love with the exclusive dog homes.
04-23-2009 | IT, New Media & Software
Intershop Communications AG
Peter Mark Droste Joins Intershop Board
Highly experienced executive bolsters leadership team at e-commerce provider Jena (Germany), April 21, 2009 – The Supervisory Board of Intershop Communications AG has appointed Peter Mark Droste to the Management Board. The appointment is a result of the company’s successful growth strategy and will enable each member of the Management Board to focus more on their core duties. Intershop has acquired the services of a respected expert in Mr. Droste, whose areas of
Comments about openPR
OpenPR is clearly structured and remains true to its principle of confining itself to the essential parts. OpenPR has proven to be a very good and reliable partner to our media agency: Within the shortest time the releases are online and go down well with the media representatives. The success of OpenPR is reflected in the steadily increasing number of press releases. It is good that OpenPR exists!
Ursula Koslik, Director Marketing & PR, F+W Hamburg