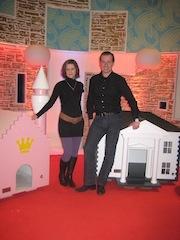 Paderborn, Germany February 2010 The Paderborn, Germany based label Best friend's HOME builds luxury and exclusive doghouses. After receiving lots of positive press worldwide the BBC invited the young company to their traditional family programme “Blue Peter“ to present two of their doghouses. In the show that aired on the 17th of February, Golden retriever Lucy and Blue Merle Border Collie Mabel immediately fell in love with the exclusive dog homes. Over one million people watched Blue Peter on that day. The BBC choose the houses Fairytale, a little palace and Alabama, a mansion modelled after an American country house. Pets are part of Blue Peter since the show first aired in 1958. Best friend's HOME's luxurious dog mansions were therefore a perfect fit towards the concept of the show. The founders of Best friend's Home Doria Keppler and André Heinermann were grateful for the chance to present their doghouses to such a big audience: “We were thrilled when the BBC contacted us. The fact that they wanted us to be part of Blue Peter, a show that is so well known and has such a long tradition in Britain made it even better.“ Best friend's HOME was founded in June 2009 in Paderborn Germany and produces high quality doghouses in the style of all-time design classics. Additional models like the idyllic Sweden house or the puristic Bauhaus Cubix can be discovered at http://www.bestfriendshome.com . The new label Best Friend’s HOME designs and builds doghouses in a completely new style, which will make every quality orientated dog owner’s tail wag. Ranging from a puristic Bauhaus style cube to an idyllic Swedish style doghouse, Best Friend’s HOME offers a never seen before type of doghouses. The Paderborn (Germany) based company Best Friend’s HOME was founded by communication designer Doria Keppler and event manager André Heinermann. “Humans, with a sense for design and aesthetics, normally transfer this to everything that surrounds them.” The two founders remember that doghouses they would have loved to buy in order place them in their gardens for their dogs, simply did not exist. This was the point where they decided to design and built them themselves. The idea for Best Friend’s HOME was born. In collaboration with an architect the first four models CUBIX, FAIRYTALE, ALABAMA and LÖNNEBERGA were produced. Many others will follow. Best Friend’s HOME Mühlenteichstraße 55 33016 Paderborn Germany 0049 5254 9350916 inffo@bestfriendshome.com

05-21-2010 | IT, New Media & Software
PAVONE AG
PAVONE Espresso Workflow 9.5 – Faster and More Flexible Workflows to Increase …
PAVONE Espresso Workflow 9.5 is now available. In this new release, PAVONE has increased escalation options for reporting workflow statuses, introduced a multilingual user interface (UI) and added versatile web services. PAVONE Espresso Workflow 9.5 automates and optimizes mission-critical workflows to increase productivity and provide businesses with the flexibility to change in a volatile economic environment. When it comes to process continuity and productivity, different workflow processes have individual
01-26-2010 | IT, New Media & Software
CardFactory AG
New sales director at CardFactory AG
Paderborn, 21st of January 2010: The new Sales Director Ralf Kleffner is responsible for all Sales activities in the CardFactory Group. Industry veteran Ralf Kleffner (37) has over 18 years sales experience in the smart card industry. Before moving to CardFactory Group he was Sales Director at CCD Challenge Card Design GmbH in Rastede (Germany). Ralf Kleffner about his new task: "With the synergies in the Card Factory Group we can
01-19-2010 | Media & Telecommunications
Orga Systems GmbH
Latin America - favorable region to invest in for operators
3G licenses and rollout of new services Paderborn (Germany), 19 January 2010: Due to the tough economic climate, operators have to seek new revenue-generating services and have to enter new markets within a shorter time to market than ever. Operators have started to meet these new concerns. As Brazil, for example, is one of the countries promising economic growth, the country has attracted many foreign operators to invest here. New
12-03-2009 | IT, New Media & Software
PAVONE AG
PAVONE Document Management – A Powerful Solution for Processing and Managing D …
Paderborn, Germany, December 3, 2009 - PAVONE Document Management is tailored to simplify and optimize processes in everyday business transactions and decision making. The result of 15 years of experience in engineering solutions for document management, PAVONE Document Management is designed to be context sensitive. The application applies multi-dimensional tagging, structuring, and categorizing mechanisms that can be customized for both organizational and individual team contexts. Its workflow functions activate static documents
08-05-2009 | Media & Telecommunications
Orga Systems GmbH
Enabling Profitable Recharge Strategies
Enhanced voucher service center sets security benchmarks Paderborn (Germany), 4. August 2009 – As prepaid remains to be the main driver behind GSM subscriber growth, profitable recharge strategies are crucial for success. Orga Systems, inventor of GSM prepaid, therefore launches a new release of its well recognized voucher service system OVSC. The new release again sets benchmarks for the industry. The certified secret code generation algorithm in combination with a
02-13-2008 | IT, New Media & Software
Orga Systems GmbH
Herrmann new CTO at Orga Systems
Paderborn, Germany, 11. February 2008. Orga Systems, leading provider for convergent real-time billing, has appointed Ferdinand Herrmann the new Chief Technical Officer (CTO). To date, Herrmann, a declared telecommunications specialist, was managing system integration throughout the company. Now he is assuming the position of CTO from Adnan Yaqub, and with it the responsibility for the Orga Systems’ worldwide system development. Adnan Yaqub, a definitive participant in the company’s extraordinary technological
Comments about openPR
OpenPR is clearly structured and remains true to its principle of confining itself to the essential parts. OpenPR has proven to be a very good and reliable partner to our media agency: Within the shortest time the releases are online and go down well with the media representatives. The success of OpenPR is reflected in the steadily increasing number of press releases. It is good that OpenPR exists!
Ursula Koslik, Director Marketing & PR, F+W Hamburg