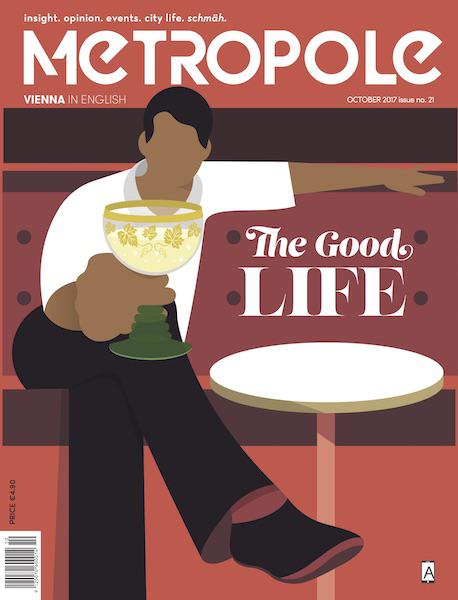 VIENNA, 3 October 2017 – In October, METROPOLE- Vienna in English is all about the concept of The Good Life. From street poetry to Schanigärten, the cover story (p 18) reflects on the social fabric that supports how we live ‘The Good Life’ in Vienna. The cover (illustrated by Lilly Panholzer) has a hidden layer, which can be revealed using the augmented reality app Artivive.In this issue you will find: “Catalonia Dreaming” p 25, International, Liam Hoare Catalonia will hold a referendum for independence on October 1st, which is the first vote of its kind since Scotland’s failed by a ten-point margin in 2014. The results of Catalonia’s election and potential complications will be watched closely by the EU.“Renate Brauner: A Crusader for Social Equality”  p 15, Melange, Margaret Childs Vienna’s CFO was interviewed by Editor-in-Chief Margaret Childs in the Executive City Councillor’s favorite cafe in the 5th district, where they talked about politics and equality in Vienna since the 1980s.“All Parliament’s a Stage” S. 76, Special Report, Benjamin Wolf The national elections in Austria will be held on October 15th, promising repercussions far beyond the country’s borders. This primer is a must read for english speakers seeking to understand the ins and outs of the Austrian Election. “Virtual Reality for Animals: No Strings Attached” p 37, Science, Lanay Griessner Scientists from Freiburg and Vienna have developed a virtual reality environment (FreedomVR), which works like a holodeck for mice. With it, scientists can study how visual cues influence an  animals’ behavior, providing greater accuracy and control in experiments. Quotes from the issue “I think the American dream is nonsense. Thinking you can just suck it up, work hard and get rich, that’s just rubbish. It’s really a question of social circumstances” Renate Brauner, Executive City Councillor p 15, Melange, A Crusader for Social Equality, by Margaret Childs“Sunrises and Sunsets are free. In the end, The Good Life is a state of mind.” Andrew Standen-Raz, Author p 18, Cover Story, ‘The Good Life’bout METROPOLE: Founded in October 2015, METROPOLE is a magazine for expats and global citizens living in  Vienna, Austria. Published in English, it provides its readers with everything they need to know to make the most of the city.The magazine is available on newsstands and online starting Oct 1, 2017. For a complimentary press copy, please contact Catherine Hooker at pr@metropole.at. Departments: Current Events, Opinion, Quotes, Stats & Numbers, Austrian News Briefs, Weird News, Cover Story, International, Interviews, Guides, Science & Technology, Business, City life, Grätzl, Music, Art,  Theatre, Cinema, Books, Lifestyle, Fashion, Wine, Night Life, Restaurants, Recipes, Travel, Sports, Events Calendar, Jobs, Classifieds, and the Last WordCatherine Hooker, Head of Communications +43 664 551 92 58 pr@metropole.at www.metropole.at Mariahilferstrasse 49/15 1060 Vienna

02-09-2018 | Media & Telecommunications
Home Town Media GmbH
Democracy: The Austrian Way
VIENNA, 1 February 2017 – This month, METROPOLE, the magazine with an international eye on Vienna has watched democracy in action as the new government sets up shop. In this issue, you will find an interview with Heinz Fischer as we checked in on his post-presidential life. The cover story looks beyond the headlines of ‘The Far Right is Now in Power in Austria’ and examines the forces that
12-04-2017 | Media & Telecommunications
Home Town Media GmbH
Nostalgia: Why we crave a past that never was
VIENNA, 1 December 2017 – This month, METROPOLE, the magazine with an international eye on Vienna feels a pang of bittersweet Nostalgia. In the cover story, “Eternally Alt Wien” (p 18) we look at the different versions of old Vienna that have been imagined over centuries. Every generation has their personal favorite, from the imperial grandeur of the Habsburgs to the wonder years of the 1950s or Bruno Kreisky’s
09-01-2017 | Media & Telecommunications
Home Town Media GmbH
Design: METROPOLE presents the Viennese Method
VIENNA, 1 September 2017 – In September, design is the word on the street as Vienna Design Week, Vienna Contemporary, and MQ Vienna Fashion Week dominate the city, and METROPOLE guides you through this month where form and function meet. The cover story (p 18) “A Design State of Mind” explores Viennese design, where a unique combination of politics, history, and geography have created what Lilli Hollein, co-founder and director
08-18-2017 | Media & Telecommunications
Home Town Media GmbH
AustrianStartups Elects New Board Member, Margaret Childs, founder and CEO of ME …
Vienna, 18 August, 2017- CEO and Editor-in-Chief of METROPOLE-Vienna in English, Margaret Childs, was elected to the board of AustrianStartups, and is currently the only female member of the board. Markus Raunig, the managing director of AustrianStartups announced Childs’ election to the board at the 49th Stammtisch of AustrianStartups on August 16. Raunig introduced her to the crowd, “She has the entrepreneurial experience of building up a publishing company here