"Your Cities are Burned with Fire" Isaiah 1:7 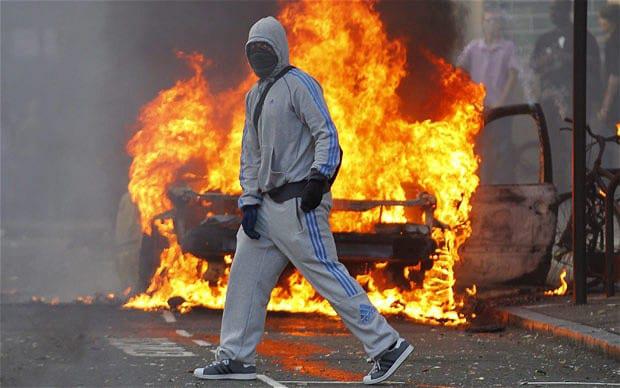 Racially charged riots have been boiling over in America. The results have been fires, violence, destruction of property and clashes with police. The American dream of peace, liberty and justice for all is turning into a nightmare as many prepare for a race war. Some call it anarchy and others call it a revolution.All across this nation conflicts between police and minorities is escalating. The latest round of race riots started after a white policeman was cleared of killing a young black man. 120 people have been arrested after three nights of riots in St. Louis, MO.Anthony Smith, a 24-year old black man, was shot dead by Jason Stockley, a white officer in 2011. Smith ran away from the police and was shot dead after a chase. The riots began last week after the officer was acquitted by a judge for murder.Soon after St. Louis was on fire. Riots, looting, store-front destruction and police cars were being smashed. Accusations of police racism is fueling an age of anger and riots that is responsible for many of the fires and violence in our cities. There is tensions growing and feelings of mistrust among certain segments of society towards law enforcement. These scenes are increasing with frequency in American cities.These very burnings were prophesied in the Bible:“Ah sinful nation, a people laden with iniquity, a seed of evildoers, children that are corrupters: they have forsaken the LORD, they have provoked the Holy One of Israel unto anger, they are gone away backward. Why should ye be stricken any more? ye will revolt more and more: the whole head is sick, and the whole heart faint. From the sole of the foot even unto the head there is no soundness in it; but wounds, and bruises, and putrifying sores: they have not been closed, neither bound up, neither mollified with ointment. Your country is desolate, your cities are burned with fire: your land, strangers devour it in your presence, and it is desolate, as overthrown by strangers.” Isaiah 1:4-7.These violent episodes and deteriorating race relations are just the symptoms of the godless and sinful age of the last days. And this spiritual crisis would result in the desolation and burning of our cities. God doesn’t just tell us why these violent protests are burning our cities; He also tells us how to solve this problem.“Wash you, make you clean; put away the evil of your doings from before mine eyes; cease to do evil; Learn to do well; seek judgment, relieve the oppressed, judge the fatherless, plead for the widow. Come now, and let us reason together, saith the LORD: though your sins be as scarlet, they shall be as white as snow; though they be red like crimson, they shall be as wool. If ye be willing and obedient, ye shall eat the good of the land.” Isaiah 1:16-19.About: Advent Messenger provides news and commentary on current events, top stories, social trends and political and religious events. For more news visit www.adventmessenger.orgContact: Andy Roman, Publisher Address: Advent Messenger, PO Box 96, Dover, OK 73734 Phone: (888) 299-2119 Website: www.adventmessenger.org Email: info@adventmessenger.org

You can edit or delete your press release "Your Cities are Burned with Fire" Isaiah 1:7 here

09-14-2020 | Leisure, Entertainment, Miscel …
Advent Messenger
Radical Feminists at the United Nations Blame the COVID-19 Crisis on Men and Fat …
The United Nations is taking advantage of the COVID-19 pandemic to advance its radical feminist attacks on marriage, family, fatherhood and men. Our world is increasingly showing more and more contempt for fathers and and the traditional biblical family. But the latest post by the United Nations beats them all. The United Nations is now saying that the COVID-19 crisis is proving that the “millennia of patriarchy” has been very
04-29-2019 | Health & Medicine
DataM Intelligence 4Market Research
Global Gunshot Injuries Market to witness growth during the forecast period 2019 …
Hyderabad, April 29, 2019 -- The "Gunshot Injuries Market : Global Industry Trends, Share, Size, Growth, Opportunity and Forecast 2019-2026" report has been added to Datamintelligence.com's offering. Gunshot Injuries Market Dynamics ⦁Primary drivers of the global gunshot injuries market are increasing incidences of firearm-related crime resulting in non-fatal gunshot wounds, incidents of war, armed riots, and the rising crime rates. ⦁For instance, in 2017 alone, 11 mass shootings in the US
09-25-2017 | Politics, Law & Society
Advent Messenger
Acid Attack, Terrorism, Riots: Where is the Church?
We cannot ignore the wickedness that is engulfing our world as global catastrophes are occurring and civil unrest is escalating. In St. Louis rioters attacked police and reporters and destroy property as they protested a jury’s acquittal of a white policeman in the shooting death of a black man. In France, 4 young American girls were taken to the hospital with facial injuries after having acid sprayed in their faces by
08-26-2011 | Politics, Law & Society
UK Visa & Immigration
UK Riots: What effects have they had on UK Immigration?
Disturbing images and videos of widespread looting took over the news channels, social media networks and blogs during the UK disturbing riots. But what effect has this had on UK immigration? The riots have clearly had an effect on the global image of the UK as many citizens of international countries perceive the UK as a country unable to control its citizens. As the streets are being cleared of broken glass and
08-19-2011 | IT, New Media & Software
Rich IDSman
Riots in England - who is to blame?
The whole world watched in horror as the riots in the UK reached epic proportions. Images of burning cars, shops being smashed and looted and burning buildings flashed across TV sets throughout the world. It looked like a make believe horror movie except it was real. The vast majority of the vandals were teenagers and kids as young as 12 years old. They were robbing anything and everything they could.
08-18-2011 | Business, Economy, Finances, B …
FrancesCopicardi
How the London Riots Affected Businesses
The London riots which occurred from the 6th – 10th August 2011, caused a lot of unrest throughout London and many businesses were hit by looters and vandals causing devastation in some communities. Many of the worst hit areas were lower income areas of London. Where many local businesses suffered from goods being stolen and even worse seeing their business premises being completely vandalised or worse, torched to the ground.
Comments about openPR
Your portal is fast, simple, and easy to use. Others may have more functions but they also demand more editing time, you have to preformat the text in order to achieve a good result etc. I think openPR is really fantastic!
Andreas Knepper, wallmedien AG