Riots in England - who is to blame? 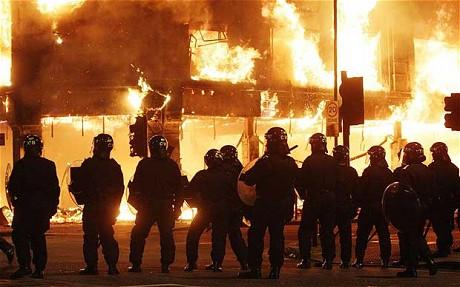 The whole world watched in horror as the riots in the UK reached epic proportions. Images of burning cars, shops being smashed and looted and burning buildings flashed across TV sets throughout the world. It looked like a make believe horror movie except it was real. The vast majority of the vandals were teenagers and kids as young as 12 years old. They were robbing anything and everything they could. As we watched helplessly the question came to mind again and again…So who is to blame for these youths and the mad destruction?As the senseless violence and looting continued, the images started telling their own story. It is a story that goes beyond the riots, violence and just stealing for the fun of it. The riots show a deeper meaning to it all. There is something wrong in our society, something terribly wrong, that is causing these kids to act like this.We are just looking at the tip of the iceberg. As we view the images of destruction it becomes more and more obvious that the root of the problem is very serious. There is an entire generation that is going astray. They lack education, values and guidance and this young generation is completely out of control with no hope for their future and nothing to live for. “KIDS” are the “Key IDeaS”It is not about good kids and bad kids but rather kids who have a good family with a good education and those kids who do not. This is the difference between kids who have a future to look forward to and those who are drifting aimlessly. There are in fact kids who have something to do and kids who have nothing and remember those who have nothing simply have nothing to lose.Before we play the blame game we should ask ourselves “what are we doing for these lost kids?” We need to wake up and realize these kids represent the future of our society. The “KIDS are the Key IDeaS” (just spell the word “kids”, and you will understand why) and this is not only because they represent our future generation. Our kids have the vibrant energy of youth and the capacity to create, inspire and achieve. All they need is some guidance.So wake up England stop trying to find culprits or who is responsible and let us all admit that we all have a responsibility for what has happened and we can learn from our mistakes. If we do not act now and make the right decisions we will be facing some terrible consequences in the future.This is why I created the “web 8G project” (8 generation, where, the number 8 means, the creativity and the infinity). The project is important and ambitious. It will change not only the internet, but it will alter our society, and the way we look at things now. It is still in a developmental stage but is an important and ambitious project that will bring about momentous change. I did not want to be a passive bystander and stand by just watching as our kids are destroyed. This will be a fantastic project and will give all kids the hope of a wonderful, bright future. It will be an inspiration to kids because it is created especially for them. I am making a brand new world for them. This world will allow us to discuss and find solutions for global problems and decide how to change the world into a better place. It will be a world where kids can make a difference because kids have the key ideas. Kids can once again hold their heads high and be proud to be KIDS. Here we will have our own online bank account, where we will keep and even make real money, but we will make money not working, but only using our creativity, our intellect and our minds. I have plenty of ideas about how to give to everybody, yes, you read it right, to all kids the opportunity to make money…It will be a social website that will empower us to find our talents and creative inspiration. This website will get us involved in society and will help us have a future. Now everybody is thinking what the best punishment should be for these juveniles who took part in the riots. Yes they do deserve some punishment but there is a better way to do it. The only way that they can understand and learn from their actions is to get them to repair the damage they have done. How can they do it ? Of course I will let the “key people” to take this important decision, but let me tell you, that the kids have the ability not only to destroy, but also the ability to take the responsibility for their actions and the ability to repair what they have done… because they are “Key IDeaS”http://www.facebook.com/richidsman http://www.twitter.com/richidsmanThe whole world watched in horror as the riots in the UK reached epic proportions. Images of burning cars, shops being smashed and looted and burning buildings flashed across TV sets throughout the world.4 Ottawa Road, Leicester, LE1 2EJ, United Kingdom.

You can edit or delete your press release Riots in England - who is to blame? here

05-27-2021 | Science & Education
Kids ‘R’ Kids of Prosper
Kids ‘R’ Kids of Prosper Earns Cognia Accreditation
Kids ‘R’ Kids of Prosper announced today that it has earned accreditation by Cognia™. Prosper, TX - USA | May 26, 2021 -- Kids ‘R’ Kids of Prosper announced today that it has earned accreditation by Cognia™, a nonprofit organization that provides quality assurance for schools, school districts, and education service providers. Cognia, formerly AdvancED, nationally recognizes districts that meet rigorous standards focused on productive learning environments, equitable resource allocation that meets
09-26-2017 | Fashion, Lifestyle, Trends
FlexFit Mats
Kids & Fitness
We live in a time when there are too many things kids can do to entertain themselves while remaining inactive: television and movies, smart phones, video games and social media and of course what my kid loves to do…sleep! So how can you get your kids to jump off the couch, put down whatever electronic device they’re holding, and join you for a bit of good old fashioned exercise? The Right Approach Encourage
04-28-2017 | Leisure, Entertainment, Miscel …
Holiday Inn Resort Kandooma Maldives
Maldives With Kids
Many families steer clear of traveling to the islands with kids in tow due to the traditional honeymoon and romantic holiday stereotype, but things are changing! Dive, surf and snorkel in crystal clear water, swing in a hammock on white sandy beaches, and bask in the warm golden sunshine. Welcome to the Maldives, family-style! With easy flights to Male, family-friendly resorts, and activities galore, what are you waiting for?
07-05-2016 | Energy & Environment
House Clearance Ltd.
Recycled Crafts For Kids
Rubbish removal can be expensive. Now a person no longer has to worry about waste removal. Instead of using junk collection services there are many recycled crafts that children can make. Waste recycling can now be turned into crafts. Supplies for these crafts for kids can also be found in the home clearance section in most stores. We could offer some solution for coping with the accumulated clutter at home
05-19-2016 | Leisure, Entertainment, Miscel …
www.hotelmarineplaza.com
Kids Carnival
Enjoy 3 fun filled day where kids can enjoy dance sessions, fun activities, amusement rides, live DJ & super delicious food at Hotel Marine Plaza on 20th,21st & 22nd May 2016 from 5pm till 8pm. Hotel Marine Plaza is all set to make the kids happy by giving them the most amazing experience with the superb ambience and open air venue experience. Kids Carnival will be the reason for your
04-11-2016 | Health & Medicine
Buddy Bigfoot - Exercise Made Fun
Michigan Kids Find Bigfoot
Yes, of course, it’s a hoax. However, this fabricated mythical monster has teeth and serious intent. Bigfoot has been discovered by four Michigan children in a 1,200 square foot film studio built by their father, Michael Schmidt. Michael spent two years "dumpster diving" and driving by construction sites in search of discarded building materials with which he has constructed his own film studio dream. He used discarded lumber for
Comments about openPR
I can't but agree to the positive statements about your portal: easy to use, clear layout, very good search function, and quick editing!
Jens O'Brien, Borgmeier Media Communication