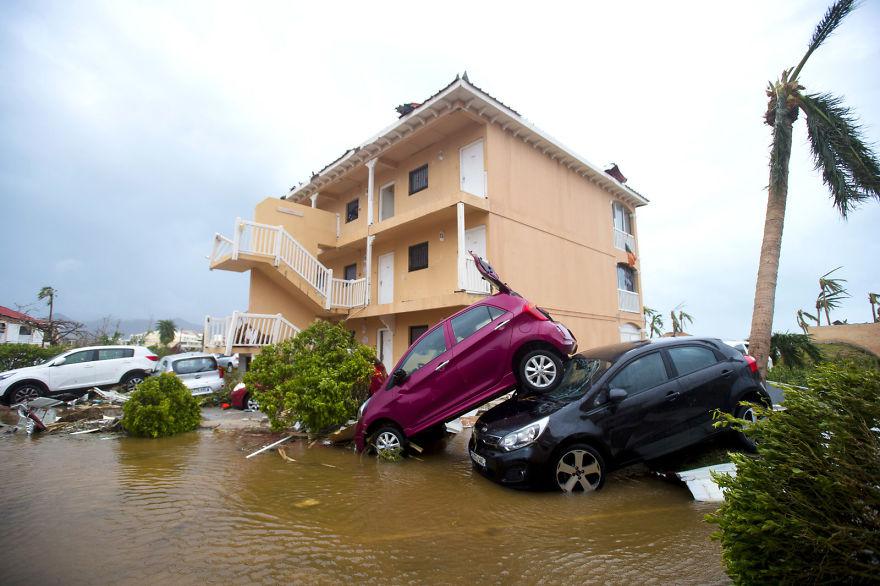 The greatest threat to the America people is not the economy. It’s not Islamic terrorism, not illegal immigration, not North Korea, Iran, climate change and not even the environment. The greatest threat to our people are the judgments of a righteous and holy God Who pours out His wrath upon an unrepentant nation and world.

The damage estimates from just Hurricane Irma and Hurricane Harvey stands at around $290 billion dollars and counting. This estimate does not factor in the tragic loss of life in the Caribbean and in the United States.

AccuWeather predicts an economic impact of $290 billion from Harvey and Irma combined amid a destructive and costly hurricane season. This cost is factored by the following:

2. Increased unemployment rates for weeks, and possibly months in some places

4. Crop loss, including cotton crop and 25 percent of orange crop, which will impact the cost of consumables for all Americans

6. Damage to homes, cars, furniture, antiques, jewelry and other valuables

7. Loss of valuable papers, cherished belongings such as photos

Over 30 million people were affected by Hurricane Irma (Caribbean, Florida, Georgia) and another 10 million by Hurricane Harvey (Texas and Louisiana). This represents the greatest number of people affected in the US in modern times by natural disasters.

The Florida Keys was a popular destination for bars and clubs and they had a vibrant gay community. Gay Pride Week was an annual celebration that flooded Key West with LGBT revelers from around the world. That’s all come to an end.

The bars and the party scenes are now quiet as the land rests from the frivolities that were being done. All the Hurricane drinking parties that are a tradition for Key West have quit as people are realizing the desperation they are now in.

God warns that the land will have its time of rest from sin:

We are living in a fearful and solemn time. What is our condition and standing before God in this hour? Pride, disobedience, rebellion, hypocrisy, frivolity, and amusement? All these sins have clouded the minds of the people so that eternal things are not being discerned. If we have any regard for our nation or for the salvation of our people then there must be a decided change. We must seek the Lord with true repentance and deep contrition so that our sins may be forgiven and blotted out and these costly, destructive disasters can cease.

“Let the church arise, and repent of her back-slidings before God. Let the watchmen awake, and give the trumpet a certain sound. It is a definite warning that we have to proclaim. God commands his servants, ‘Cry aloud, spare not, lift up thy voice like a trumpet, and show my people their transgression, and the house of Jacob their sins.’ The attention of the people must be gained…There should be earnest searching of heart. There should be united, persevering prayer, and through faith a claiming of the promises of God. There should be, not a clothing of the body with sackcloth, as in ancient times, but a deep humiliation of soul. We have not the first reason for self-congratulation and self exaltation. We should humble ourselves under the mighty hand of God. He will appear to comfort and bless the true seekers” (Review and Herald, March 22, 1887).

You can edit or delete your press release Hurricane Damage Estimates: $290 Billion and Counting here

09-25-2017 | Fashion, Lifestyle, Trends
Save the dragonslayers
Even dragonslayers need help - Hurricane Irma fundraiser
In the early morning hours of September 10, 2017, Hurricane Irma made landfall near Big Pine Key in the Florida Keys as a Category 4 storm. The winds lashed at trees and homes, washing boats ashore with the storm surge and doing catastrophic damage to everything in her wake before moving up the western coast of Florida. The entire state was impacted in some way, but the most
09-08-2017 | Energy & Environment
Advent Messenger
The Destructive Wrath of Hurricane Irma
“A voice from the east! a voice from the west! a voice from the four winds! a voice against...the bridegrooms and the brides! a voice against the whole people!” (Great Controversy, p. 30). This is one very frightening storm that will bring destruction to everything in its path. Hurricane Irma is considered the most powerful storm in recorded history for the Caribbean. If you are in the projected path don't even
03-08-2016 | Tourism, Cars, Traffic
Weather2Travel.com
Weather2Travel.com publishes guide to hurricane seasons
How much do you know about hurricane seasons? Do you know the difference between a hurricane and a tropical storm? Or, when and where they occur, and how likely it is that your holiday might affected by a hurricane? All of these issues and more are tackled in our new hurricane season guide complete with an interactive tool to help you assess the tropical storm risk when it comes to
11-12-2012 | Business, Economy, Finances, B …
Hurricane Grill & Wings
Hurricane Grill & Wings Announces Houston Development
Award-Winning Wing Restaurant To Add Five New Restaurants In Texas WEST PALM BEACH, FL (OCTOBER 30, 2012) – Hurricane Grill & Wings is excited to announce a new development agreement, adding five new restaurants to the Houston area. Currently, the island-inspired restaurant has over 48 locations in eight different states. Hurricane Grill & Wings has one other Texas location in San Antonio that has achieved enormous success since its opening in
10-10-2012 | Leisure, Entertainment, Miscel …
Hurricane Grill & Wings
Hurricane Grill & Wings® Surges Inland To Burnsville
Award-Winning Wings Restaurant Makes Debut In Minnesota BURNSVILE, MN (October 1, 2012) – The Hurricane Grill & Wings® relaxed beach atmosphere is the newest family-friendly restaurant for the “Minnesota Nice” folks of Burnsville. With a wide variety of savory menu items and 32 signature sauces and rubs, Burnsville residents can rest assured that Hurricane Grill & Wings offers options for every member of the family. Famous for their award-winning, fresh-never-frozen jumbo chicken
09-11-2012 | Leisure, Entertainment, Miscel …
eps gmbh
eps, service provider for Southside and Hurricane
Once a year, two picturesque German towns, Scheessel (in the Lüneburg Heath region) and Neuhausen ob Eck (near Tuttlingen in Baden-Württemberg) are transformed into meccas for fans of indie, rock and electronic music. Both towns, the normal populations of which are about 12,000 and 2,500 respectively, accommodate a further 70,000, resp. 55,000, "neighbours" in caravans and tents over a long weekend. The infrastructure required to transform verdant pastures into
Comments about openPR
Your portal is fast, simple, and easy to use. Others may have more functions but they also demand more editing time, you have to preformat the text in order to achieve a good result etc. I think openPR is really fantastic!
Andreas Knepper, wallmedien AG