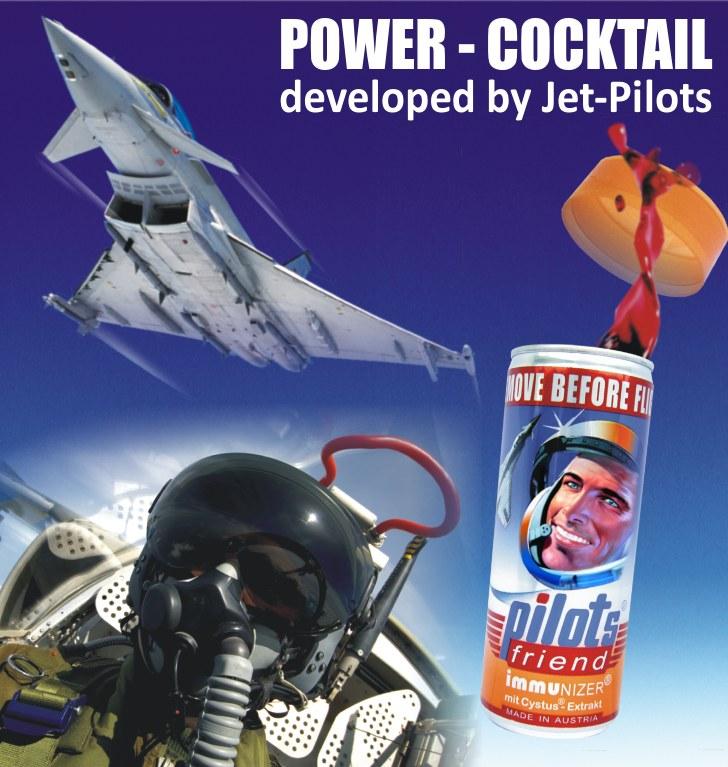 (Paris, Los Angeles) Whether in the cockpit of a jet fighter or on a lengthy intercontinental flight, pilots depend on their alertness and concentration abilities, their reaction time as well as their strong powers of resistance. In order to effectively support this performance ability the idea of a vitalizing power cocktail was born that complies with the high requirements placed on jet pilots. Loyal to the motto “Only the best is good enough”, pilots developed a beverage concept with bio-scientists, intended solely for their own personal use in the beginning. As fate would have it, the secretly brewed elixier remained undiscovered for a short time only, and meanwhile it has made its scene debut. With the name Pilotsfriend and a cult-designed logo portraying a jet pilot, the cocktail rich in its consistency stands for an unrivalled taste experience that provides a lasting, refreshing and strongly vitalizing effect. The power cocktail, called „pilots“ for short, is considered a hot tip and now enjoys jet set parties favourite status. Many famous persons, like Vin Diesel, Jodie Foster and Paris Hilton, have already been spotted with a „pilots“. Also the great community of PC gamers and „World of Warcraft“ enthusiasts appear to have been won over by „pilots“, just as some national presidents, church dignitaries and competition athletes. Whoever can get ahold of one of the special aluminium cans may consider himself fortunate, for the power cocktail imbibed by the tough guys in their jets tearing across the open skies is sold out due to high demand. (Text: Robert Cunningham) The Pilotsfriend Company was founded by active pilots from civil and military aviation in 2006. The company’s headquarters is in the European Union. The company is focused on the development and international distribution of high quality products and nutritional Supplements based on the special requirements in aviation. RCCA PR & Press Robert Cunningham 2425 Olympic Blvd. Ste. 6010 Santa Monica, CA 94404 USA

11-07-2008 | Fashion, Lifestyle, Trends
PILOTSFRIEND Ges.m.b.H.
Pilots take-off for world records with a special drink
A unique start-up is coming onto the market: PilotsFriend GmbH out of Salzburg. This enterprise is an association of active pilots from military and civilian aviation. It was founded in 2006 after a meeting of flying comrades that focused on improving the physical endurance of pilots. In hardly any other profession are the demands placed on physical achievement, concentration, alertness and robust health as rigorous as in aviation. With this
10-30-2008 | Fashion, Lifestyle, Trends
PILOTSFRIEND Ges.m.b.H.
Functional Drink From High-Performance Aviation
PilotsFriend Immunizer, or pilots for short, is a unique beverage on the market. Belonging to the new generation of so-called functional drinks, it was created according to specifications laid down by experienced pilots for the purpose of enduring high physical stress and strain. What makes the beverage formula distinctive is the fact that it is the first to be based on the Cystus extract which, due to its specific polyphenol
07-08-2008 | Health & Medicine
PILOTSFRIEND Ges.m.b.H.
PILOTSFRIEND at the Farnborough International Airshow 2008
Salzburg, July 2008 – On the occasion of the 60th anniversary of the Farnborough International Airshow the company PILOTSFRIEND of Austria will present its new Functional Drink, PILOTS Immunizer, under the motto: „Made by pilots for pilots“. With over 270,000 visitors the Farnborough International Airshow, taking place every even year, is one of the most important civilian and military air and space travel trade fairs. Visitors skilled in the field
06-06-2008 | Fashion, Lifestyle, Trends
PILOTSFRIEND Ges.m.b.H.
PILOTSFRIEND – The First Immunizer Drink enters the Market
Salzburg, June 2008 – PILOTSFRIEND, a company located in Anif near Salzburg, is commencing distribution of the first Immunizer Drink. This new drink was developed in accordance with the guidelines set forth by civil and fighter pilots to meet the special requirements of aviation, and it is entering the market under the name PILOTS Immunizer. PILOTS Immunizer possesses a fresh, slightly tart, aromatic taste and serves to maintain

07-12-2017 | Advertising, Media Consulting, …
ReportsWeb
City Travel Briefing: Paris
Paris has been resilient as one of the world's leading tourist destinations despite a host of challenges related to security, accommodation and overcrowding. With a clear focus on reinventing the city for the modern traveller by transforming its infrastructure, culture and attractions, Paris is well placed to compete with emerging cities vying to become the tourist destination of choice. This report outlines Paris's strategy in attracting new (and old) holidaymakers
07-19-2016 | Industry, Real Estate & Constr …
GEW (EC) Limited
Working Without Waste comes to Paris
For their sixth conference, Working Without Waste is heading for Paris. The event takes place on 30 September 2016 at the hotel Mercure Paris La Villette. Jean Poncet, editor in chief of the label and packaging magazine ETI&PACK will host the event and the guest speaker is printing industry specialist and narrow web consultant John Penhallow. Experts from AB Graphic, Avery Dennison, AVT, CERM, Flint, GEW, GSE Dispensing, Lundberg Tech and Martin
03-03-2016 | Fashion, Lifestyle, Trends
AMLD
Paris : Gammas exist
They come from Saturn and land in Paris on the first day of Fashion Week. Already defined the best design 2016, Saturn is the object of desire, not only for members of high society, but also investors from the finance and art. Saturn is a handbag made of platinum, a clutch, which reveals in a cascade of diamonds and precious stones to accompany the ladies in all occasions, and offering advanced technological
04-10-2012 | Leisure, Entertainment, Miscel …
IMAGE UNLIMITED COMMUNICATIONS
April in Paris
WHAT: There’s nothing like April in Paris. The city is awash with the color of cherry blossoms and daffodils, and while there is a slight chill, love is in the air. On Saturday, April 21st, 2012 from 12:00PM to 5:00PM, The Wine ConneXtion, located in North Andover, MA will transport guests to the city of lights with “April
09-08-2011 | Fashion, Lifestyle, Trends
Tresor Paris
Tresor Paris Launches The ‘Les Couleurs’ Collection
With attention turning towards ‘2012’, Tresor Paris has produced the Les Couleurs collection with warmth and friendship in mind. Inspired by 2012, each colourful crystal bracelet represents a ring from the iconic friendship flag. The orange Lever bracelet –is made of 9 handpicked bright orange crystals with 2 magnetite stones. Just as appealing, the Soleil bracelet has a bright warm feel just like the name suggests - made up of 9 yellow
03-03-2011 | IT, New Media & Software
Korrisoft
Pocketoplan Paris FREE Paris City map without roaming charges
22 Feb. 2011 – Rennes (France) Korrisoft, a « Game & Apps » studio announces the availability of its first offline city map application: Pocketoplan Paris. Pocketoplan Paris is available for free on the Apple Application Store for iPhone, iPod & iPad. The easy to use application contains a Paris city map with several zoom levels. With all the information stored on the device, the user can access the map without the
Comments about openPR
OpenPR ist the nicest and most clearly laid out PR platform I have seen to this day. The press releases are displayed very nicely and clearly and without any unnecessary frills. The updates are fast and the finished release looks appealing and is clearly legible. Even with 16 years of experience one discovers new things from time to time. Congratulations!
Gabriele Ketterl, Director Marketing & PR, Menads