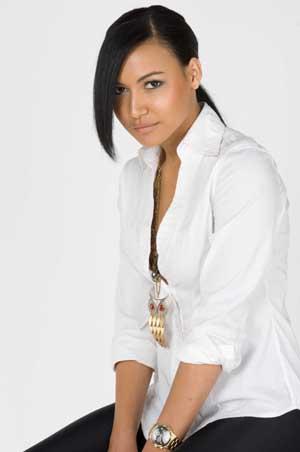 "I absolutely love bowling even though I'm not the greatest at it. I'm so excited to be a part of this event, it's a great cause and I'm always more than happy to help in any way I can to support community organizations,” shares Rivera.

Naya Rivera will be seen next on the FOX primetime television series “Glee” set to premiere after “American Idol” in March 2009. She will be playing the character “Santana Lopez.” You may also know her from past roles on TV show such as: “The Fresh Prince of Bel-Air,” “Family Matters,” “Smart Guy,” “Even Stevens,” “8 Simple Rules,” “The Bernie Mac Show,” and most recently the hit series “CSI: Miami.”

For interview requests and information on Naya Rivera, please contact Jordyn Borczon or Mona Loring of MLC PR at 818.706.8080.

Exotic beauty Naya Rivera landed her first series regular role, on the sitcom “The Royal Family” starring Red Foxx and Della Reese. After one season “The Royal Family” was cut short due to Red Foxx’s tragic death, however Naya kept working. She went on to book roles on “The Fresh Prince of Bel-Air,” “Family Matters,” “Smart Guy,” “Even Stevens,” “8 Simple Rules,” “The Bernie Mac Show,” and most recently, a challenging role as a heroin addict on the hit show “CSI: Miami.” Currently, the most exciting project Naya has booked to date is the FOX primetime television series “Glee” set to premiere after “American Idol” in March 2009. Naya will play “Santana Lopez.”

03-16-2017 | IT, New Media & Software
Algoworks
Women’s Day Celebrations 2017
On the occasion of International Women’s Day, Algoworks celebrated this special time with joy and delight by expressing gratitude towards the women of their workplace, and made them feel special and loved. The entire day was dedicated to all the women employees of Algoworks and their valuable presence in the team was celebrated with glee. The entire premises were adorned with balloons and flowers. Women employees were dressed up in
08-01-2011 | Fashion, Lifestyle, Trends
Bullets4Peace Ireland
Bullets4Peace Launched In Ireland
Bullets are generally symbols of chaos and destruction, but Rafi Anteby transforms war bullets into beautiful and unique designer handmade jewellery as a way of spreading consciousness of peace. Not only promote those beautiful pendants a strong message, Bullets4Peace is also donating a portion of the sales towards several charities through their program “Every Bullet has a target”. Bullets4Peace is made of recycled bullet casings taken from reload centres, streets
03-03-2011 | Business, Economy, Finances, B …
London Green Marketing
Glee are effecting their Branding states London Green Marketing
As we all are aware, Glee has created a reputation for themselves with their innovative US TV Series based in a happy-go-lucky High School. London Green Marketing are self-confessed Glee fans, but it's not easy to predict whether a TV show will be a hit. For every Lost there's a The Nine, for every The Wire, a K-Ville and for every ER, a Three Rivers. So it's no surprise that
01-17-2011 | Leisure, Entertainment, Miscel …
Ticketloot Inc
Lady Gaga and electronic product designing may sound an odd combination
Lady Gaga and electronic product designing may sound an odd combination but the most powerful American pop singer just made it happen. She unveiled the Polaroid’s the Grey Label line of products that she has co-designed with the company at the 2011 International Consumer Electronics Show held in Las Vegas on January 6. She has her hands in the designing of three products including a set of sunglasses cum
11-26-2010 | Leisure, Entertainment, Miscel …
GigSport.com
Glee Tickets On-Sale Tomorrow (November 26)
Glee is a musical comedy-drama television series that airs on Fox in the United States. It focuses on the high school glee club New Directions competing on the show choir competition circuit, while its members deal with relationship, sexuality and social issues. The show's musical performances have been a commercial success, with over thirteen million copies of Glee cast single releases purchased digitally, and over five million albums purchased worldwide.
02-19-2009 | Arts & Culture
Johansson Projects
Johansson Projects presents Flaming Furbelows
Flaming Furbelows is an art exhibition that explores uneasy encounters between attraction and repulsion, tenderness and terror. From inside fleshy mounds of fur and yarn, Marina Vendrell Renaut's soft sculptures emit eerie music-box squeals, not unlike a wind-up-doll soundtrack to a horror film. Using minks from cast-off fur coats spliced together with stuffed animals and yarn balls, Vendrell's plush and bulbous monstrosities offer up wooly orifices and suggestive pleasures that
Comments about openPR
I can't but agree to the positive statements about your portal: easy to use, clear layout, very good search function, and quick editing!
Jens O'Brien, Borgmeier Media Communication