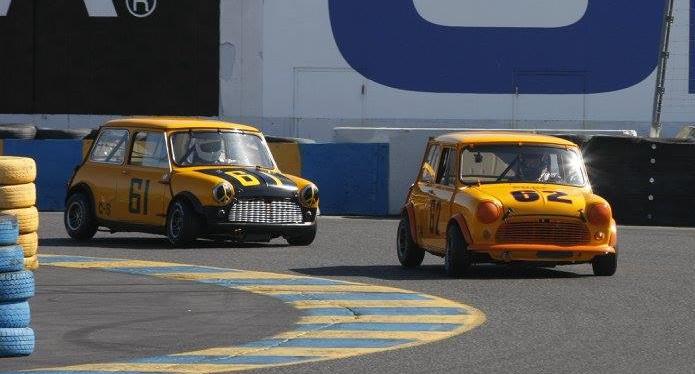 These seven historic race Minis square off against two dozen competitors in four different classes based upon engine size, carburetion, weight and other performance modifications at the 14th Annual Charity Challenge Vintage Car Road Races, sanctioned by the Classic Sports Racing Group (CSRG). One of the Mini Mania entered cars is an SCCA National Champion.

In the M1 classification Julie Racine, 1960 Austin Mini Cooper #969 and husband John Burmann, 1965 Austin Mini Cooper #65 have entered their own cars which they’ve raced for seven years. Julie obtained her brother Dennis’ 1960 Mini in 2009, which had been built for autocross by Dennis in 1992 and required converting to road racing. In 2010, John and Julie traded his racing Sprite for a 1965 race Mini from Arizona.

“The best part of racing the Mini’s is the time our family gets to spend together,” Julie explained. “It’s a hobby but I think it’s a lifestyle now for the family that literally drives us together.”

The #00 Cooper S was campaigned extensively in the Southeastern US by Atlanta’s Dick Faille and is known as “The Flying Shoebox.” It was purchased and raced by New York’s Ken Walker and then recently acquired by Don Racine, Julie Racine and John Burmann. It has a long history of race wins and championships. Jonathan Lewis will be driving this at the Can-Am event.

Dennis Racine and Mini Mania built the #177 in 1982-1983 as a tribute to the legendary Mini rally cars that won the 1967 Monte Carlo Rallye and more in the 1960s. It has a full race setup and the Mini Mania team has successfully competed in over 120 vintage races across the US with many victories.
The number #62 1965 Austin Mini Cooper S for Netherland’s Rene de Vries is a ground up restoration just completed in 2017 by the Racines. It won this past June at the Sonoma Historics with Dennis Racine at the wheel - a full 45 years after its first race victory.

The #62 was part of the three-car Peterman-Unsbee Racing Enterprises (PURE) team that won multiple races and titles in the 1970s Midwest. This car was piloted by Randy Unsbee to consecutive championships with six straight wins his 1972 rookie season and nine straight in 1973.

Team leader Don Racine is driving the only other surviving member of the PURE racing team, which he purchased from John Unsbee in late 2009. The 1960 Austin Cooper #61 “Bumblebee” was upgraded to Cooper S specs in the early 1970s and won many races at legendary tracks across the Midwest. Don has continued its winning ways with victories at the Indianapolis Motor Speedway, Sonoma, Laguna Seca, and Coronado racing circuits, to name a few.

Endaf Owens from Wales drives the 1965 Cooper S #17 Ward Barbour Mini, a highly modified tube-frame race car that ran in the GT5 category and won the SCCA National Championship in 1993 with Richard Krause the driver. It now sports a 1312cc motor from the 2004 title winner, and is the fastest of seven-car Mini Mania entry.

The #17 is the sister car to the Fortech Mini built in conjunction with Comptech by Doug Peterson in 1985. It has multiple wins in vintage racing and guest driver Owens, a newlywed, will be spending part of his honeymoon at the Can-Am Challenge driving this iconic car.

Between now and the Can-Am race weekend race fans and competitors can learn more about the event and share their stories on Facebook by uploading pictures and biographies at www.facebook.com/canamminichallenge/.

Northern California’s Classic Sports Racing Group, currently celebrating its 50th season, will hold its 14th Annual Charity Challenge at Sonoma Raceway on the weekend of September 29-October 1, 2017. The event includes all the usual CSRG race groups with Vintage and Historic race cars dating from the 1930s to the 1990s running in nine race groups. Featured is the Can-Am Mini Challenge for the original Austin Mini and its variants, as well as the final round of the 2017 Crossflow Cup celebrating the 50th anniversary of Formula Ford.

In its first thirteen years, the CSRG Charity Challenge Series raised almost a million dollars in contributions to the Sonoma Chapter of the Speedway Children’s Charities.

Registration for Mini competitors can be found at: www.motorsportreg.com/events/14th-csrg-charity-challenge-sonoma-raceway-232502 or by calling 530-866-0771.

Mini Mania is located in the heart of the Gold Country in Northern California's Sierra Nevada
Foothills and has been in the business of providing parts and accessories for the original Classic Mini Coopers since 1974. As a result Mini Mania is the largest U.S. supplier of parts for the Classic Mini and developed performance parts for the new BMW MINI Cooper and Cooper 'S’ in 2001. This was a year before the car was released in this country. Mini Mania continues as both enthusiasts and leaders in providing parts and accessories for the BMW MINI Coopers. www.MiniMania.com.