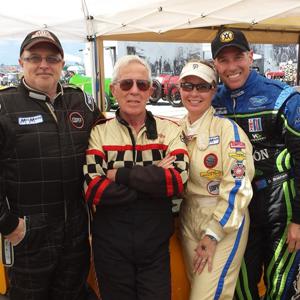 When the Racines converge on Sonoma Raceway this September 29 - October 1 for the Can-Am Mini Challenge it won’t just be as competitors, but as life-long enthusiasts celebrating the historic appeal of these classic race cars with their extended Mini Cooper family here and overseas.“It’s not just about the racing event, but the people at the race weekend,” Racine said. “As a driver I love to win, but the real joy of racing is the camaraderie and sharing a passion and experiences.” Between now and the Can-Am race weekend Mini fans and competitors are sharing their stories on Facebook by uploading pictures and biographies at https://www.facebook.com/canamminichallenge/The Racine family is preparing as many as seven classic Minis for the vintage racing event. Four are being driven by the immediate family: Don, son Dennis, daughter Julie and her husband John Bermann. Don’s spouse, Shirley, is also a longtime Mini enthusiast and team principal. Three other Mini Coopers will be driven by European champions. A full team roster is set for an announcement within a few weeks.“Minis have captured the hearts and minds of all kinds of car enthusiasts since first being introduced in 1959,” explained Don Racine from the Nevada City, CA headquarters of Mini Mania. “Whether you drive one on the street, race one, or just admire the brand there is a unique bond that most Mini fans want to share.”The Can-Am Mini Challenge is sanctioned by the Classic Sports Racing Group and celebrates the 58th year of this automotive icon with a reunion-like atmosphere that also benefits Speedway Children’s Charities. https://www.sonomaraceway.com/events/classic-sports-racing-group-charity-challenge/About CSRGNorthern California’s Classic Sports Racing Group, currently celebrating its 50th season, will hold its 14th Annual Charity Challenge at Sonoma Raceway on the weekend of September 29-October 1, 2017. The event includes all the usual CSRG race groups with Vintage and Historic race cars dating from the 1930s to the 1990s running in nine race groups. Featured is the Can-Am Mini Challenge for the original Austin Mini and its variants, as well as the final round of the 2017 Crossflow Cup celebrating the 50th anniversary of Formula Ford.In its first thirteen years, the CSRG Charity Challenge Series raised almost a million dollars in contributions to the Sonoma Chapter of the Speedway Children’s Charities.Registration for Mini competitors can be found at: https://www.motorsportreg.com/events/14th-csrg-charity-challenge-sonoma-raceway-232502 or by calling 530-866-0771.About Mini ManiaMini Mania is located in the heart of the Gold Country in Northern California's Sierra Nevada Foothills and has been in the business of providing parts and accessories for the original Classic Mini Coopers since 1974. As a result Mini Mania is the largest U.S. supplier of parts for the Classic Mini and developed performance parts for the new BMW MINI Cooper and Cooper 'S’ in 2001. This was a year before the car was released in this country. Mini Mania continues as both enthusiasts and leaders in providing parts and accessories for the BMW MINI Coopers. http://www.MiniMania.comMini Mania, Inc. 870 Gold Flat Rd. Nevada City, CA 95959 USA Media Contact: Randy Unsbee - r.minimania@gmail.com 503-912-3870