What Can Manufacturers do to Help Solve the Energy Crisis? 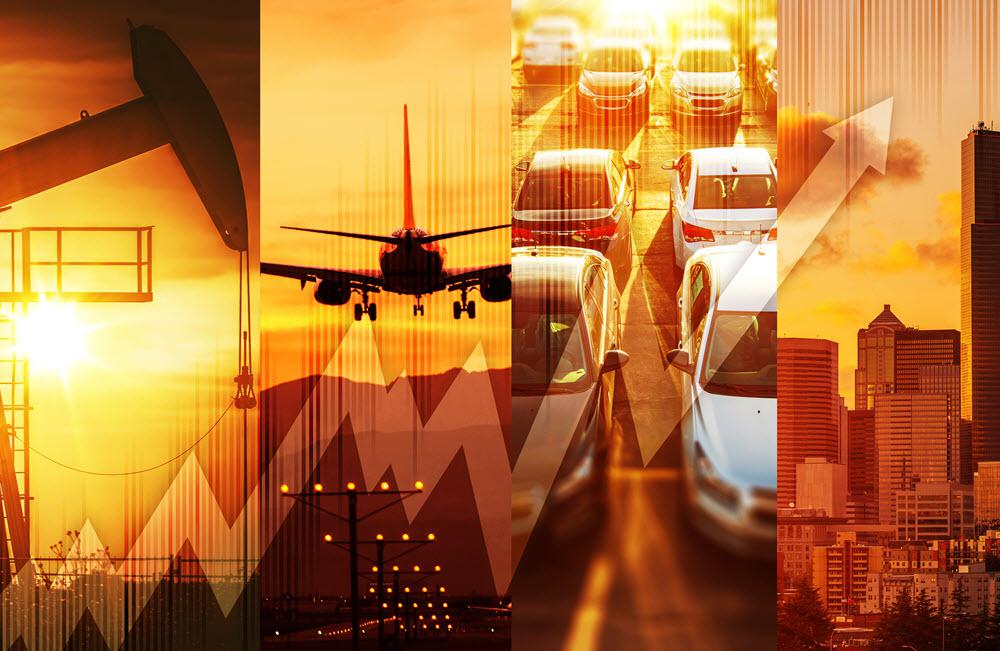 Among the many potential threats affecting manufacturers, disruptions caused by climate change brought about by carbon-based energy sources are already impacting sectors like food and beverage manufacturing. With global temperatures projected to rise as much as 4.7 to 8.6 °F this century*, all manufacturing sectors need to plan ways to mitigate risk — ranging from hardening infrastructure and securing global supply chains to seeking ways to conserve fossil-fuel derived energy until it's possible to switch over completely to green energy solutions based on renewable resources.*2014 Intergovernmental Panel on Climate Change (IPCC) Fifth Assessment Report.Business is all about managing risk.For manufacturers, a major risk looming on the horizon is the potentially devastating effect that fossil-fuel based energy (which has spurred industrial growth in developed countries for well over 100 years) is having on the world's climate."But wait!" you say. Not all past predictions have come true.We agree; that's a valid point. History has shown many dire predictions have not come true:• In the 1970s, it was widely predicted that population growth would outstrip food production, leading to worldwide famines. While many today suffer from food shortages, the Agricultural Revolution has helped feed a hungry world that now totals over 7 billion (more than double the number of people alive in the 1970s). • King Hubbert predicted in his widely accepted "Peak Oil" theory that domestic oil and gas production would peak in 1970 and then fall into terminal decline. Thanks to the development of fracking techniques, domestic oil and gas production has returned to levels last seen in 1965.These two developments alone have helped the world economy grow, particularly in underdeveloped regions. The emergence of China as an economic powerhouse is something that wasn't widely anticipated before it happened. Now, other regions are poised for takeoff. Despite the 2008 financial crisis, Africa — the poorest inhabited continent — is predicted to grow at a 6% annual rate, bringing Africans to middle-income status by the year 2025.But with this success comes new problems. We are seeing more extreme weather events, with fresh evidence that climate change is the underlying cause.As manufacturers, we should welcome the addition of billions of new middle-class consumers across Africa, the Indian Subcontinent, South East Asia, and Latin America, but as these consumers acquire the trappings of the Western World — from gasoline and diesel powered cars to air conditioners — what risks will we incur?Will billions of people living on the coasts be forced to abandon major cities as sea levels rise? Will Europe freeze as changing water temperatures disrupt the flow of warm Gulf Stream waters that keep its climate much warmer than its northern latitude would predict? Will expanding desert areas make arable land so scarce that food and water shortages lead to mass migration and armed conflict?There are also risks that arise from compounding processes. Once the permafrost melts, will the release of billions of pounds of trapped carbon dioxide accelerate climate change to unimaginable levels, e.g. beyond the capacity for human life? Will we suffer from total environmental collapse as animal and plant populations suffer massive die-offs due to the spread of tropical diseases and temperature increases that exceed their ability to adapt or migrate?What Does the Future Look Like for Manufacturers in 2050 If We Don't Take Action Today, Such As Adopting Green Energy Solutions Based on Renewable Sources?This all sounds pretty dire.Hopefully, these predictions won't come true — but managing risk means identifying potential issues and finding ways to mitigate problems.First, let's be specific about what the risks are for manufacturing companies between now and the year 2050:1. Risk Lies in the Global Supply Chain Says McKinsey• Management consultant McKinsey advises manufacturers that climate-change risks extend up and down the supply chain: you can't limit risk planning to your own immediate facility — your entire value chain (which may extend worldwide) is potentially affected. • McKinsey reports that Transport/Logistic and Agriculture, followed by Utilities and Oil and Gas will be most affected by physical risks due to climate change. Risks due to price changes will affect Utilities and Transport/Logistics most, followed by Agriculture.2. Rising Impact of Longer Droughts, Increased Water Scarcity, Food Insecurity, and Wildfire Risk• Climate-change-driven drought is already negatively affecting food and beverage production in Australia. Droughts affecting cotton production are affecting clothing production for sporting goods manufacturer Nike. • Beverage production by multinationals has moved away from Australia to persistent water shortages. Beverage maker Coke is finding that climate change is also disrupting the supply of sugar cane, sugar beets, and citrus for fruit juice. • Widespread disruptive fires in Australia and the Western US have been joined by fires in unexpected places, such as the Smokey Mountain region and northern Alberta, where the wildfire in Fort McMurray disrupted oil sands extraction manufacturing processes in 2016.3. Increasing Damage from Extreme Weather Events (Tornadoes, Hurricanes, Storms, Precipitation, Cold and Heat Waves, Smog) Will Disrupt Manufacturing Facilities• Increasing severity and frequency of weather-related disasters are putting manufacturing faculties around the world at risk.Read more ... https://formaspace.com/articles/manufacturing/help-solve-the-energy-crisis/?utm_source=openpr&utm_medium=content&utm_campaign=article-041117Formaspace advances the spirit of discovery and creation through the design and manufacture of custom business furniture. Our furniture marries form to function with flexible solutions for clients in the laboratory, industrial, and office environments.Formaspace serves over 80% of the Fortune 500, as well as universities, governments, small businesses, and individuals.Formaspace 1100 E. Howard Lane, Suite 400 Austin, TX 78753800.251.1505

You can edit or delete your press release What Can Manufacturers do to Help Solve the Energy Crisis? here

05-22-2019 | IT, New Media & Software
HTF Market Intelligence Consulting Pvt. Ltd.
Wind Energy Technology Market
HTF MI released a new market study on Southeast Asia Wind Energy Technology Market with 100+ market data Tables, Pie Chat, Graphs & Figures spread through Pages and easy to understand detailed analysis. At present, the market is developing its presence. The Research report presents a complete assessment of the Market and contains a future trend, current growth factors, attentive opinions, facts, and industry validated market data. The research study
11-12-2018 | Energy & Environment
Skylight Energy Melbourne
Skylight Energy Melbourne
Skylight Energy is the leading provider of solar energy in Australia. We specialise in high quality yet affordable renewable energy products for either your home or business. Our large selection of products consists of only the finest Tier 1 solar panels, solar inverters and home battery packs. All of our products have been approved by the Clean Energy Council, and certified for safety to the highest Australian and international standards. Whether
06-08-2018 | Energy & Environment
qyreports
Green energy
Green energy is the electricity derived from smooth assets generating minimum pollution and consists of sun photovoltaic, hydropower, wind electricity, bio-fuels and geothermal. expanded investments in era studies and improvement, supportive regulatory frameworks, extended consciousness and electricity security troubles and environmental concerns amongst others are fueling the boom in call for for clean and inexperienced energy. The report on the Global Smart Cards Automated Fare Collection System Market is a thorough
08-01-2017 | Health & Medicine
ReportsWorldwide
Energy Drinks in India
ReportsWorldwide has announced the addition of a new report title Energy Drinks in India to its growing collection of premium market research reports. Energy Drinks in India industry profile provides top-line qualitative and quantitative summary information including: market share, market size (value and volume 2011-15, and forecast to 2020). The profile also contains descriptions of the leading players including key financial metrics and analysis of competitive pressures within the market. Synopsis: Essential resource
03-01-2017 | Energy & Environment
eSight Energy
Complete Energy Management from eSight Energy
Why choose eSight Energy? You can manage and reduce your energy with the eSight software by importing data into the software and managing your expectations with informative and intuitive graphs and charts. Please view the video here: https://vimeo.com/203430337 eSight Energy provides energy management solutions for use across any type of building or process. With installations across Europe, the US, Middle East and Asia, solutions are provided through a network of resellers
11-15-2010 | Energy & Environment
Heraeus Noblelight
Plant Optimisation Saves Energy
Can the coating dry more quickly? Is it possible to reduce the rejection rate? Does the plant use too much energy? Many companies ask themselves questions like these. Energy and material costs are important considerations for industrial companies who wish to maintain or improve their competitiveness. At the same time, the optimisation of existing plant can often be the more sensible and cost-effective option over installing new plant. A
Comments about openPR
OpenPR ist the nicest and most clearly laid out PR platform I have seen to this day. The press releases are displayed very nicely and clearly and without any unnecessary frills. The updates are fast and the finished release looks appealing and is clearly legible. Even with 16 years of experience one discovers new things from time to time. Congratulations!
Gabriele Ketterl, Director Marketing & PR, Menads