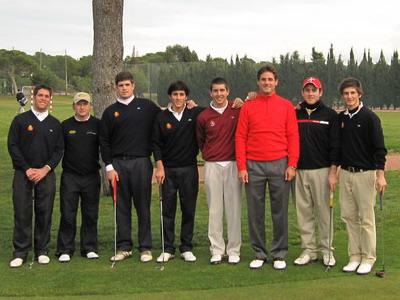 For the second year running, the Swash Staff Instructors, led by Director of Instruction Phil Kenyon, were invited by the Spanish Golf Federation to train over 35 amateurs of their elite squad at the Escorpion Golf Club in Valencia between the 26th and the 30th of December 2008. The squad consisted of handicaps between 2 and +3,7 and ages from 15 to 23 years, some of them having an eye on a Scholarships in the USA to improve their competition skills, others turning professional and competing on the European Tours.On the first evening, Phil Kenyon and Michel Monnard gave a presentation on their putting philosophy Instruction. A philosophy which has helped many PGA Tour Professionals like Henrik Stenson, David Howell, Oliver Wilson, Oliver Fisher and Maarteen Lafeber, amongst many others, in the past year.On the first working day, Phil Kenyon and Michel Monnard were joined by Juan Garcia Estrada, another Swash Instructor, based at HSPSE Madrid. Together the team took the players through a complete Analysis process consisting on Sam Puttlab, Dual Video Capture, Ball Roll capture and an Analysis Questionnaire to gain an insight into their work during the last year.In the evening Phil Kenyon, Michel Monnard and Juan Garcia Estrada worked through the collected data and set about creating an improvement plan for each player, including practice drills and strategies for each individual.On Day 2 each player was shown their data and had the chance to work with the 3 instructors on their own technique.The third day was dedicated to green-reading and pace control. To start with every group worked through a series of explanations and exercises on green-reading to help the players establish a routine to effectively and efficiently assess a greens contours and line of a putt. The second part of the session was dedicated to drills on pace control.After the 3 day long days the Swash team and all the players packed up and went their separate ways back across Europe bringing a close to a successful 2008.About Harold Swash Putting School of ExcellenceHarold Swash has more than 40 years of experience in the golf industry as a coach, golf club designer and inventor of putting training aids. Harold has coached many of the top professional and amateur golfers with his innovative putting training techniques including Padraig Harrington, David Howell, Henrik Stenson, Niclas Fasth, Soren Kjeldsen, Darren Clarke, Ian Woosnam, Constantino Rocca, Robert Jan Derksen and Nick Faldo to name just a few.Harold Swash is making his teaching philosophy available for all keen golf teaching professionals who want to learn how to teach Putting better. For more information about The Harold Swash Putting School of Excellence go to www.swashputtingschools.comSwash Putting Schools Asia/Pacific, Australia, South Africa, Middle East 27a Banastre Road Southport PR8 5AW Merseyside United Kingdom PR9 7SWContact: Michel Monnard, C./Roses 4, 07580 Capdepera (Mallorca/Spain) Email: michel@swashputtingschools.com Phone: 0034 639635634

05-18-2016 | Sports
Apple Podcast: The Positive Phil Show Podcast Launch
Positive Phil Launches " The Positive Phil Show – A POSITIVE PODCAST FUSING PO …
– Blending business and storytelling, a new podcast officially debuts today from www.positivephil.com interviewing the world’s most innovative companies and individuals. Reporting on conundrums, curiosities and current events from across the business world, the “Positive Phil Show” podcast launches with twenty-four episodes exploring a wildly diverse range of topics from start up businesses, funding , personal motivations and inspirations.t In addition to its positive-hosted episodes, “Positive Phil Show” will include
07-25-2011 | Associations & Organizations
Eagle's Trace retirement community
Eagle’s Trace Hires Phil Shockley as Associate Executive Director
HOUSTON, TX—Eagle’s Trace, an Erickson Living retirement community, announced the hiring of Philip Shockley as its new Associate Executive Director and Licensed Nursing Home Administrator. Mr. Shockley comes to Eagle’s Trace from Brooksby Village, a sister Erickson Living community located in Peabody, Massachusetts, where he held the position of Administrator of Extended Care at Renaissance Gardens since February 2009. Previously, Mr. Shockley served as an Administrator in Training from November
06-01-2011 | Business, Economy, Finances, B …
Carl Terzian Associates
Valensi Rose Attorney Phil Magaram Featured Panelist on Tax Update Panel at 2011 …
Los Angeles, CA – May 31, 2011– Attorney and senior partner Philip S. Magaram of Valensi Rose, PLC will be a featured panelist on the Tax Update panel of the Entertainment Industry Conference on June 15, 2011, at the Fairmont Miramar Hotel in Santa Monica, California. The annual Entertainment Industry Conference is presented by the California CPA Education Foundation. “Having practiced law for over 45 years, I know the problems
03-28-2011 | Health & Medicine
Allen Media Strategies LLC
Int Op: The Dr Phil...of Chiropractic Scams?
For Immediate Release Contact: Alyssa Joy 703-589-8960 alyssa@allenmediastrategies.com This Dr. Phil isn't a household name-yet-but in the more shady chiropractic circles, he is persona non grata. Out to expose the myths, scams, and malpractice procedures used by many of his colleagues, Dr. Phil Yamamoto refuses to remain silent while patients are manipulated, frightened, and given misinformation by chiropractors across the US (and beyond). Ask Dr. Phil: --What primary three lies patients are told on their
03-08-2011 | Politics, Law & Society
Creative Endeavors for Dr. Leigh-Davis
Dr. Leigh-Davis is Interviewed on the MicWom Television Show, About Dr. Phil
Dr. Leigh-Davis excitedly discusses her new book and the Yuin University Law Library, during her interview on the MicWom television show. This is Dr. Leigh-Davis’ second appearance on the MicWom show this year. Although Dr. Leigh-Davis wanted to talk about the opening of the Yuin University Law Library and her upcoming “free” legal research seminar; host Michael Womble was focusing on Dr. Leigh-Davis’ appearance on the Dr. Phil television show. After
02-23-2011 | Leisure, Entertainment, Miscel …
Audio Fidelity/Morada Music
Audio Fidelity Releases Classic Phil Collins Solo Album No Jacket Required in 24 …
Phil Collins is one of the most recognizable names in the music industry. After recording several ground breaking albums with Genesis and Brand X he launched a solo career that was one of the most successful of any artist leaving the fold of an established and successful band. Culver City, CA, February 23, 2011 -- Phil Collins is one of the most recognizable names in the music industry. After recording several
Comments about openPR
OpenPR ist the nicest and most clearly laid out PR platform I have seen to this day. The press releases are displayed very nicely and clearly and without any unnecessary frills. The updates are fast and the finished release looks appealing and is clearly legible. Even with 16 years of experience one discovers new things from time to time. Congratulations!
Gabriele Ketterl, Director Marketing & PR, Menads