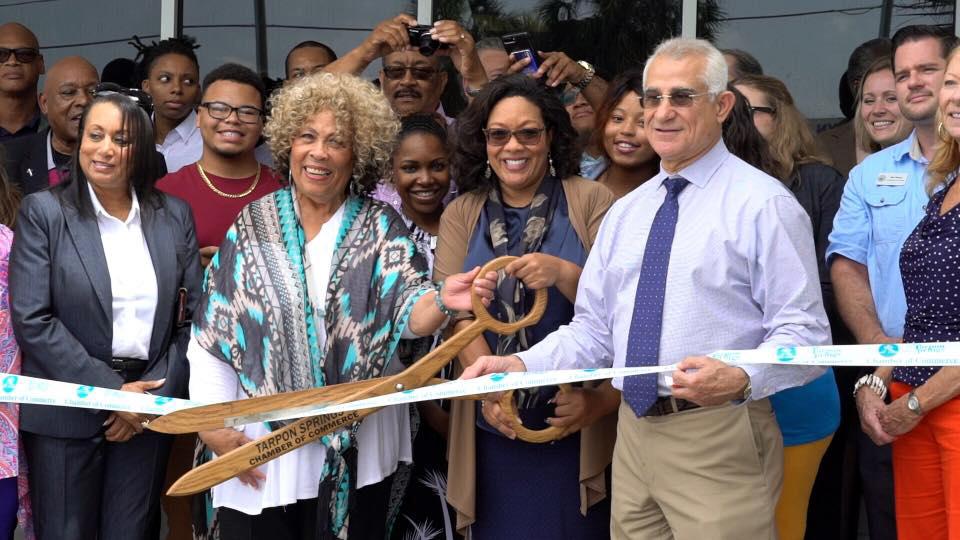 Local business owners, music lovers, community dignitaries and charity supporters were joined by Founder and Chairwoman, Myra J. Cole-Baucom, Board members and staff to celebrate Cole Link Foundation’s grand opening at the 2017 Inaugural Benefit Bash at Ruth Eckerd Hall in Clearwater on Thursday, Aug. 3rd. The event was filled to capacity with 250 attendees who helped to raise funds for charitable programs in educational awareness, health & wellness and the arts. The following day, Mayor Chris Alahouzos honored Cole Link Foundation with the keys to the city and participated in the official ribbon cutting of the Foundation’s new headquarters located at 871 E. Klosterman Road in Tarpon Springs.Performing at the Benefit Bash was the popular local band, The Black Honkeys along with jazz musician, Kelly Rhodes and jazz singer, Belinda Womack-Christy. The doors opened at 5 p.m. with a silent auction. The excitement began when an announcement was made that the top donor would win a signed football by Joe Namath and Earl Christy, New York Jets 1969 Super Bowl III champs. The signed football was kindly donated by Earl Christy who attended the fundraiser and presented it to Greg and Doreen Columbo for their generous donation. The event was also attended by Dr. Marvin L. Bright, provost of St. Petersburg College Tarpon Springs Campus, Cary Stiff, CFRE and chief executive officer of Chi Chi Rodriguez Youth Foundation and Grammy winner Ralph Farris. Pictures and video from both events can be viewed at www.ColeLinkFoundation.org.“The entire evening was a dream come true. I am truly thankful for the generosity of our donors and event sponsors during and after our event. It’s always been a passion of mine to help as many people in need as I possibly can. And now, after this successful fundraiser, we are on our way,” Foundation Founder and Chairwoman, Myra J. Cole-Baucom, said. “Our Foundation doors are now open and we intend to spread the word, continue to get support for our programs and make a difference in people’s lives.” In an effort to promote the arts and continue to fundraise, the Foundation is busy putting together their upcoming concert, Brothers in Song, on October 21st in Clearwater with three-time Grammy winner, Robert Mirabal and Grammy winner, Ralph Farris performing their inspired melody and heart-pounding rhythms, illuminating and inviting a more compassionate world.To honor the brave men and women in our nation’s emergency services, the Foundation will host its highly anticipated 911 Hero Salute Charity Golf Tournament in Tracy, CA on Sept. 11, 2018 with plans to expand the tournament to other states each year. In addition, the Foundation strives to saves lives with their national Car Seats for Kids program and has plans to host its first Jazzy Sassy Expo for local senior citizen entertainment and education. The Foundation’s upcoming House to Home Apprenticeship program aims to train unskilled workers as homes are repaired or renovated for low income residents. The Golden Linkettes dance troupe, the Foundation’s local community youth program, performed at the event and has been invited back to perform at Clearwater’s Downtown Block Party.# # #Founded in 2016, Cole Link Foundation is a 501 (c)(3) nonprofit organization that supports an expanding network of community and individual enrichment programs in the areas of educational awareness, health & wellness and the arts. The Foundation serves as a link between donors and communities to assist people in need, with a particular emphasis on Native Americans. It works to inspire a chain reaction of community involvement and pride to stimulate vital resources and assistance to empower hope, advancement and cultural diversity for all people. For more information, visit www.ColeLinkFoundation.org.Cole Link Foundation 871 E. Klosterman Road Tarpon Springs, FL 34689 Contact: JoLynn Wright, Program Director Tel.: (727) 940-8481 • Cell Phone: (727) 678-9392 Email: jolynn@colelinkfoundation.org Website: www.colelinkfoundation.org