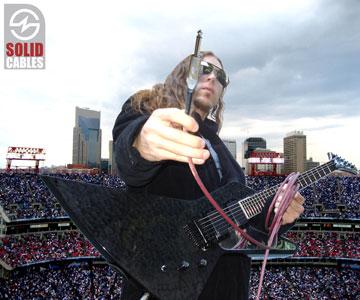 Pasadena, Ca January 26, 2009 - High end instrument cable manufacturer, Solid Cables has announced today the official signing of electric guitarist and Guitar Hero contributor, Marcus Henderson. Marcus has been the primary contributor of recorded guitar tracks to the highly successful video game, Guitar Hero selling well over 13 million copies.Hand crafting instrument cables using only the finest quality materials, Solid Cables™ products are built to last and outperform all others. They truly do live up to their name. So much in fact, they offer a lifetime warranty on all of them. The quality of these cables has played a major role in the success of the company as artists of the highest caliber take note as to how important the instrument cable truly is to ones tone and performance. As a musician, you invest money and time into your skills, your instrument and your amplifier. It only makes sense to invest wisely in the one thing that brings all of that together. Your instrument cable."Plugging in a Solid Cable for the first time was almost a spiritual experience... The purity and clarity is astonishing and ear-opening to say the least. They sound great and you could probably tow a boat with these things and they'd work perfectly. Don't be out of your element- Get a Solid Cable and you'll be The Dude that puts other rigs into a world of pain. ...A world of pain." Marcus HendersonIf you've ever heard of a video game series called GUITAR HERO and GUITAR HERO II, ENCORE:80'S etc; chances are you're rockin' out to the work of Marcus Henderson! Every generation has a lightning rod to the guitar. From Hendrix to Van Halen and beyond, millions of people have been inspired to rock just by hearing the masters at work. In 2005 Guitar Hero awoke the masses and re-introduced some of the most incredible rock songs ever recorded to a whole new generation of hearts, ears and hands eager to rock. Critically acclaimed guitarist Marcus Henderson was chosen to take the role as one of the lead guitarist's for the series with jaw-dropping results- Several dozen best soundtrack awards, Multiple Game of the Year awards, countless accolades, and Millions of copies sold. Marcus is part of the heart and soul of the game, and the lightning rod for hundreds of thousands of Guitar Hero fans crossing over to the real thing. With 20 years playing and touring experience, Marcus has brought an energy and authenticity to the game that few interactive experiences offer. Putting everything into his recordings, his performances on the Guitar Hero series not only leap off the screen, but the level of detail and accuracy is frightening. Many times his tracks will be mistaken for the original.Possessing an innate passion for the instrument, natural musicality, and a drive to exceed ridiculous levels of musical standards, Marcus is energy, personality, musicianship and presence personified as a leader for the new generation of rockers all over the world.About Solid Cables™ Solid Cables™ is a leading manufacture of instrument cables located in Pasadena, California. All cables are handcrafted in the USA and come with a lifetime warranty. www.solidcables.comMedia contact: Josh Vittek Joshua Paul Vittek and Associates 760-505-5674 joshvittek@msn.com

07-04-2018 | Industry, Real Estate & Constr …
marcus evans Malaysia
Marcus Evan Reimagining the Future of Mixed Use Development
Marcus Evans proudly presents the 4th Annual Mixed Use Developments conference which will take place on 18th – 20th July 2018 at the Grand Copthorne Waterfront Hotel, Singapore. Happening for the fourth time this year, the three days conference will be featuring experts exploring ways to best integrate the property components, spaces, transit as well as nature. One of the speakers, Robert Brodeth Senior Associate Director Ong & Ong, Singapore shared the
03-16-2018 | Logistics & Transport
marcus evans Malaysia
Marcus Evans Brings Together Experts to Redefine Strategic Road Networks
Jointly organised with International Road Federation, marcus evans proudly presents 4th Annual Roads & Highways conference happening from 19th to 21st April 2018 at Grand Copthorne Waterfront Hotel, Singapore. The conference aiming to provide a better understanding of the challenges, opportunities and risks related to infrastructure investment, how to integrate technical knowledge for the effective implementation and execution large scale projects. One of the speaker at the event shared insights on
10-11-2017 | Associations & Organizations
business news
Oxidized PE Wax Market 2017 -BASF, Zellwax, Alpha Wax, Honeywell, Marcus
Apex Research, recently published a detailed market research study focused on the "Oxidized PE Wax Market" across the global, regional and country level. The report provides 360° analysis of "Oxidized PE Wax Market" from view of manufacturers, regions, product types and end industries. The research report analyses and provides the historical data along with current performance of the global Oxidized PE Wax industry, and estimates the future trend of Oxidized
07-19-2011 | Fashion, Lifestyle, Trends
Other Edition
Other Edition Presents Industrie Magazine Issue 3 - Look! It's Mert & Marcus
The third issue of this fashion world ode to itself devotes substantial space to two thematic compendiums of articles and interviews. The first, The Young Guns, as the name suggests, is an extensive series of short punchy articles on the rising stars of the international luxury fashion scene. From the make-up artists and hair stylists to designers and photographers making waves in the upper echelons of high fashion, it’s essential
05-24-2011 | Fashion, Lifestyle, Trends
Marcus K. Jones Productions
From Comic-Con to Conde Nast, Director Marcus K. Jones’s Latest Fashion Film D …
(May 17, 2011 ) New York, NY - “ Picture Perfect Revenge” once again shows director Marcus K. Jones’ s incredible range, and is sure to appeal to fans of Comic-Con to readers of Conde Nast alike. A director and cinematographer specializing in branded content in the form of fashion films and campaign videos, Jones’ body of work ranges from elegant product-driven portrayals of a designer’ s line to abstract experimental
05-07-2010 | Media & Telecommunications
Solon Management Consulting
Marcus Englert joins media and telecommunications consultancy Solon Management C …
Munich, 6 May 2010: Dr. Marcus Englert, age 44, will become Associate Partner at Solon Management Consulting as of the 1st of August 2010. Until the end of April, he was Chief New Media Officer at ProSiebenSat.1 Media AG. Marcus Englert will strengthen Solon in its Europe-wide media and telecommunications consultancy activities while maintaining his engagement as an investor and a partner for a fund focusing on media and technology. As Chief
Comments about openPR
OpenPR is clearly structured and remains true to its principle of confining itself to the essential parts. OpenPR has proven to be a very good and reliable partner to our media agency: Within the shortest time the releases are online and go down well with the media representatives. The success of OpenPR is reflected in the steadily increasing number of press releases. It is good that OpenPR exists!
Ursula Koslik, Director Marketing & PR, F+W Hamburg