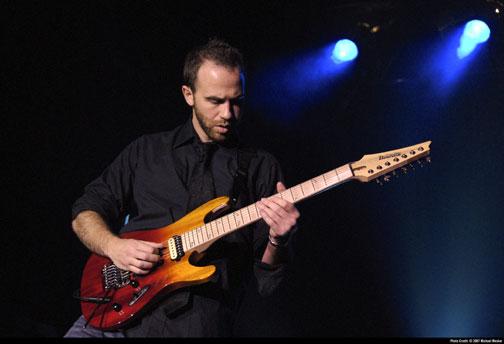 Continuing to push the boundaries of the current economy, Solid Cables continues to move forward by signing seven string guitarist, Dave Weiner. Pasadena, Ca December 08, 2008 - High end instrument cable manufacturer, Solid Cables has announced today the official signing of electric guitarist, Dave Weiner. Dave has been touring the world for the past nine years playing guitar alongside Steve Vai in Steve’s band. In addition to touring, Dave has released one solo album and has one in the works for 2009.Hand crafting instrument cables using only the finest quality materials, Solid Cables™ products are built to last and outperform all others. They truly do live up to their name. So much in fact, they offer a lifetime warranty on all of them. The quality of these cables has played a major role in the success of the company as artists of the highest caliber take note as to how important the instrument cable truly is to ones tone and performance. As a musician, you invest money and time into your skills, your instrument and your amplifier. It only makes sense to invest wisely in the one thing that brings all of that together. Your instrument cable.“Solid Cables are just that.. Solid. I know when I plug a Solid cable into my rig that I’m getting the best for my tone.” I Dave WeinerAs part of Steve Vai’s touring band for the past nine years, Dave Weiner has quickly made a name for himself as one of the elite guitarists in the music industry. As a solo artist, Dave is a Favored Nations recording artist who’s first CD, Shove the Sun Aside has been available now for the past two years and he is now in the studio completing his second release, due out early 2009. Dave has also been providing the “Riff of the Week”, now in it’s fourth season, which is currently available on itunes and YouTube. In 2001, Dave received recognition for Engineering and Guitarist on Steve Vai’s Grammy-nominated “Whispering A Prayer” from the live double CD “Alive In An Ultra World” in the category of Best Rock Instrumental Performance.About Solid Cables™ Solid Cables™ is a leading manufacture of instrument cables located in Pasadena, California. All cables are handcrafted in the USA and come with a lifetime warranty. www.solidcables.comMedia contact: Josh Vittek Joshua Paul Vittek and Associates 760-505-5674 joshvittek@msn.com

06-05-2018 | Leisure, Entertainment, Miscel …
Dave & Buster's
Dave & Buster’s to Open in Torrance
Southern California To Welcome the Ultimate Entertainment Destination to Eat, Drink, Play and Watch Torrance, CA (June 5, 2018) — Dave & Buster’s will open to the public in Torrance on Monday, June 11th in the Del Amo Fashion Center, bringing an all new reason to visit the popular retail destination. The restaurant and entertainment hub features over 41,000 square-feet of arcade games, premium sports viewing and delicious food &
12-16-2016 | Leisure, Entertainment, Miscel …
Dave & Buster's
Dave & Buster’s Opens New Location in Daly City
Dave & Buster’s, the ultimate entertainment destination, is now open in the Serramonte Center in Daly City. Dave & Buster’s Daly City is the 92nd location, and joins nearby Dave & Buster’s in Roseville and Milpitas. “The grand opening in Daly City marks Dave & Buster’s third location in Northern California, and will appeal to a whole new audience in the south San Francisco area,” said Charlie Cook, general manager
02-26-2016 | Business, Economy, Finances, B …
Christensen Law
Attorney Dave Christensen Finishes Work to Improve Civil Litigation
Attorney Dave Christensen, along with other members of the Civil Justice Improvements Committee, has worked for two years on recommendations that could improve civil litigation across the country. “The legal system can be confusing and complex for the average citizen seeking justice through litigation. The committee’s goal has been to help state courts improve access to justice by simplifying procedures and reducing cost and delay,” Christensen says. “The other members
08-03-2011 | Politics, Law & Society
ProspectMX
Dave Conklin named one of Central PA's Forty Under 40
LANCASTER, PA (8/1/2011) – On Tuesday, October 18, Dave Conklin will be honored as one of Central Penn Business Journal's 2011 Forty Under 40 award recipients for his commitment to business growth, professional excellence and the community at an evening reception and awards program at Hilton Harrisburg from 6:00 to 9:00 p.m. This year marks the program's 17th anniversary. Dave Conklin is currently the Co-Founder and President of Internet Marketing
12-22-2010 | Sports
Legend Archery
Dave Cousins : an Archery Legend
Dave Cousins, multiple time World Champion and World Records holder, joins Legend Archery’s newly created Pro Staff Team. Cousins, aged 33, has been a professional archer for fourteen years. He holds 23 World Records and was ranked number one in the World several times between 1998 and 2006. Dave will be promoting this new and exciting brand around the World during his seminars and competitions. He will also act
09-25-2008 | Business, Economy, Finances, B …
Seven Hills Group
Dave Katragadda 7hills Capital Management
Dave Katragadda Capital Management work patiently and constructively with management teams and we have a deep respect for operational excellence. We succeed when our companies succeed, to the benefit of our portfolio companies' employees, customers, suppliers and the communities in which they operate. About Dave Katragadda 7hills Capital Management: Dave Katragadda Capital Management is one of the world's leading private investment firms. We specialize in providing both financial resources and operational
Comments about openPR
OpenPR is clearly structured and remains true to its principle of confining itself to the essential parts. OpenPR has proven to be a very good and reliable partner to our media agency: Within the shortest time the releases are online and go down well with the media representatives. The success of OpenPR is reflected in the steadily increasing number of press releases. It is good that OpenPR exists!
Ursula Koslik, Director Marketing & PR, F+W Hamburg