As Market Matures, Hydrogen Expo US Grows - New Business for Exhibitors - Standing in Line for the Ride & Drive 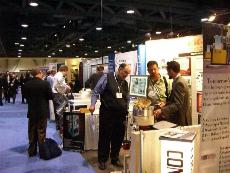 The fourth Hydrogen Expo US, held again as part of the National Hydrogen Association's Annual Hydrogen Conference 2006 in Long Beach, California is still on the growth path. From March 12 to 14, 92 exhibitors (2005: 65) showcased the latest in hydrogen and fuel cell technologies, drawing almost 2,000 attendees (2005: 1,500) into the exhibit hall. A growing international participation on the exhibitor side proves the importance of the leading gathering of industry professionals committed to clean energy in North America. One of the event's highlights was the "Ride & Drive", hosted by the National Hydrogen Association and organized by the California Fuel Cell Partnership. Twelve vehicles were available for test-rides, including a new version of Honda's FCX, the Toyota FCHV, DaimlerChrysler's F-Cell, the GM HydroGen3, and a Pick-Up converted to hydrogen combustion by ETEC. Due to the great interest, standing in line for a spin in one of these cars could hardly be avoided. The concept of converting conventional vehicle engines to hydrogen fuel was also presented in the expo hall. There, a highway patrol car from Hydrogen Labs and Quantum's Prius-based hybrid with a fuel cell and an H2 internal combustion engine stood out. BMW, whose presentation was regarded as the most attractive booth by many, among other things playfully visualized the compression of the clean fuel for the combustion engine of the new H2-7series. Compressor, valve and sensor technologies comprise another growing segment of Hydrogen Expo US. "This demonstrates how the expo grows with the market", says Ines Freesen, Managing Director of expo organizer Freesen & Partner GmbH. "For a number of exhibitors the event has helped to pave their way into market." Pdc Machines for example, a manufacturer of diaphragm compressors for various uses of hydrogen, was able to generate some US$ 5 million in new business from Hydrogen Expo US since 2003. Exhibitor General Physics (GP) was enthusiastic about their participation, too: "Hydrogen Expo US was a great success for us", commented Mary Cyr, responsible for GP's booth. "We were able to make many new contacts and network with new and existing clients." - "Not only the big players such as Air Products, Linde, Ballard, Hydrogenics or UTC benefit from the expo", concludes Ines Freesen. "Smaller suppliers have also been successful in strengthening their foothold in this growth sector, which currently offers the best potential in the United States." The next NHA Annual Hydrogen Conference and Hydrogen Expo US 2007 will be held in San Antonio, Texas. The expo is open on March 18-20, the conference takes place from March 18-22. Around 60% of the exhibit space for this event is already gone. Companies interested in having a presence should contact the organizer as soon as possible at tel. +49-2802-948484-0, or in the US & Canada at tel. 207-236-6196, Email: info@hydrogenexpo.com This press release and pictures from the 2006 event can be downloaded on http://www.hydrogenexpo.com in the "Press" section. Press Contact: Ines Freesen, Freesen & Partner GmbH Schwalbennest 7a, 46519 Alpen, Germany Tel. +49-2802-948484-0, Fax: +49-2802-948484-3 info@hydrogenexpo.com

You can edit or delete your press release As Market Matures, Hydrogen Expo US Grows - New Business for Exhibitors - Standing in Line for the Ride & Drive here

02-11-2009 | Energy & Environment
Freesen & Partner GmbH
The UK paves the way for energy recovery from biomass and waste
London, UK / Alpen, Germany, 10 February 2009 – According to the UK Waste Strategy landfilling waste is the worst environmental option. The methane it produces is a potent greenhouse gas, 21 times more potent than carbon dioxide. Consequently, the Landfill Directive calls for a 50 percent reduction of the biodegradable municipal waste that is dumped at increasing costs. Energy recovery from biomass and waste is going to play an
03-29-2007 | Energy & Environment
Freesen & Partner GmbH
Attendees got "the big picture" at Hydrogen Expo US
Premier networking event held in San Antonio, Texas - 2008 Expo already 50% sold San Antonio, TX / Alpen, Germany, 29-March-07 – Some 1,500 attendees visited last week\'s Hydrogen Expo US, this time held in San Antonio, Texas, to discuss the developing hydrogen industry and strategies to bring hydrogen cars and other products to the consumer. The latest in hydrogen and fuel cell technologies was showcased by more than 90 international
03-15-2007 | Energy & Environment
Freesen & Partner GmbH
Hydrogen Expo US 2007: More than 90 exhibitors, one shared vision
More than 90 organizations from around the world share one vision: to combat climate change with clean, reliable, affordable hydrogen and fuel cell technology. On March 19 to 21, 2007 Hydrogen Expo US agains opens its doors to showcase the latest and most exciting products and projects at the Henry B. Gonzalez Center in San Antonio, Texas. Hydrogen Expo US is held as part of the National Hydrogen Association\'s (NHA)
03-07-2007 | Energy & Environment
Freesen & Partner GmbH
Hydrogen and fuel cell products for sale: Revolutionary vehicles on display, fre …
San Antonio, TX / Alpen, Germany, 06-March-2007 – A mobile hydrogen refueler and different types of onsite hydrogen generators, all of them designed to make the clean fuel available now, are among the products on display at the upcoming Hydrogen Expo US from March 19 to 21 at the Henry B. Gonzalez Convention Center in San Antonio, Texas. The expo is once again held as part of the National Hydrogen

02-19-2021 | Energy & Environment
Kobold Instruments Sdn. Bhd.
Hydrogen as a fuel
An open road ahead for the fuel cell: The first high-precision mass flow meter for hydrogen filling stations certified to international standard OIML R 139 2018 On the road to climate-friendlier mobility, hydrogen is gaining importance as an energy source for fuel cells. However, fueling of hydrogen is more complex than fueling of gasoline and diesel. Unlike other gases, hydrogen heats up as it expands, causing pressure and temperature changes during
01-24-2019 | Industry, Real Estate & Constr …
Researchmoz Global Pvt Ltd.
Global Hydrogen Electrolyzer Market to 2025| Nel Hydrogen, McPhy, Hydrogenics, T …
Researchmoz added Most up-to-date research on "Global Hydrogen Electrolyzer Market Insights, Forecast to 2025" to its huge collection of research reports. Hydrogen, used across various industrial applications such as chemicals, electronics, glass, etc., is produced both as a principal product and a by-product. More than 90% of total hydrogen demand across the globe depends upon fossil fuel based resources. Only a small fraction of this demand is met by hydrogen produced
10-29-2018 | Business, Economy, Finances, B …
Persistence Market Research
Global Hydrogen Market: Competitive Assessment
Understanding several aspects of the global hydrogen market, Persistence Market Research has presented a well-structured analysis various trends, opportunities, challenges, restraints and growth drivers influencing the global market in its latest insightful research publication titled “Hydrogen Market: Global Industry Analysis (2012-2016) and Forecast (2017-2025).” Several aspects of the market are assessed across important regions of North America, Latin America, Europe, Asia Pacific and Middle East and Africa. The exhaustive research
10-23-2018 | Business, Economy, Finances, B …
Research 2 Reports
Hydrogen Analyzer Global Market Research Report 2018
GET SAMPLE REPORT @ https://www.research2reports.com/sample-report-instrument/hydrogen-analyzer-market/79671 Hydrogen Analyzer Report by Material, Application, and Geography � Global Forecast to 2022 is a professional and in-depth research report on the world's major regional market conditions, focusing on the main regions (North America, Europe and Asia-Pacific) and the main countries (United States, Germany, united Kingdom, Japan, South Korea and China). The report firstly introduced the Hydrogen Analyzer basics: definitions, classifications, applications and market overview; product specifications;
07-12-2018 | Business, Economy, Finances, B …
Transparency Market Research
Hydrogen Generator Market
Transparency Market Research has released a new market report titled Hydrogen Generator Market – Global Industry Analysis, Size, Share, Growth Trends, and Forecast, 2016 – 2024. According to this report, the global hydrogen generator market revenue for stood at US$ 792.44 Mn in 2015 and is expected to reach US$ 1,255.76 Mn by 2024 at a CAGR of 5.25% from 2016 to 2024. Browse the full Hydrogen Generator Market By Product
07-14-2017 | Business, Economy, Finances, B …
Persistence Market Research
Hydrogen Market to Remain Lucrative by 2021
Growing secondary end-user industries and increasing use of hydrogen in refinery hydro-processing are some of the major factors fuelling the growth of the hydrogen market for hydrogen fuel cell vehicles. Since the hydrogen is used in petroleum refining processes, the industry is impacted by unstable growth of the latter. However, increasing demand for clean transportation (the reason for unstable growth of petroleum refining industries) is supporting growth of the hydrogen
Comments about openPR
We publish our press releases on openPR.de because we like people who are "open" - just like us.
Frank Obels, CEO, INCONET - Informationssysteme, Communication und Netzwerkberatung GmbH