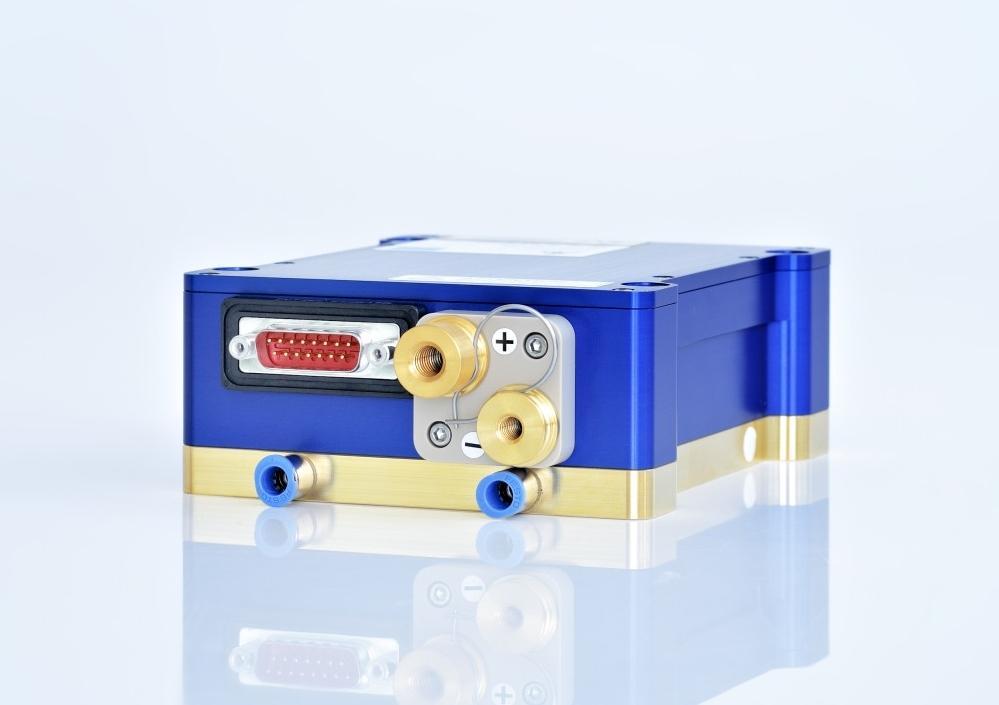 Through the acquisition of the Berlin enterprise Three-Five Epitaxial Services AG, Jenoptik has extended their expertise in the field of epitaxial wafer production. For the first time ever, the Diode Lasers Business Unit of Jenoptik’s Lasers & Material Processing division will present the complete technology chain for the production of diode lasers as well as new developments and the widening of the product range at Photonics West in the USA. In December 2008 Jenoptik completed its purchase of the wafer manufacturer Three-Five Epitaxial Services AG (TESAG) and thereby has become one of the few full-range suppliers of high-power diode lasers worldwide. Thus Jenoptik provides customers and all of those interested with the whole range of the diode lasers from a single source starting from the wafer over to unmounted semiconductor material and mounted diode-laser bars up to high-quality modified products in the form of fiber-coupled diode lasers as well as stacks. The advantages for customers are clearly evident: short development times, maximum flexibility of selection and configuration as well as the highest quality available through the complete added-value chain of the Jenoptik brand. At Photonics West 2009, which takes place from January 27-29, 2009 in San Jose, California, USA the Diode Lasers Business Unit will present together for the first time with TESAG their proven standard products as well as innovative new developments throughout the entire technology chain of diode lasers. Expansion of the product range of high-efficiency diode-laser bars by additional standard wavelength 880 nm. Based on this new semiconductor material, high-power diode lasers with a wavelength of 880 nm (88x nm) are currently being produced and offered. This wavelength will be preferentially used in the production of passively-cooled diode lasers. Besides the previously available standard wavelengths 808, 915, 938, 976 and new 880 nm, the special wavelengths 792, 830 and 1060 nm are also available on request. New fiber-coupled diode laser relies on forced air cooling. The new fiber-coupled diode laser JOLD-100-CPXF-2P A is an advancement of the previously available diode-laser module, which is now being offered for the first time with the option of forced air cooling with a power of 100 W from a 400 µm fiber (NA 0.22). The huge advantage here is obvious: Cooling can be achieved completely without water or even a TEC (thermoelectric cooler), thus simplifying the handling for the user. Alternatively, the same new fiber-coupled module will also be introduced with a higher output power and brilliance. Now with improved technology, an optical output power of 140 W from a 400 µm fiber-core diameter (NA 0.22) by means of passive cooling using industrial water is possible. The new diode-laser module can be used in direct material processing (quasi-simultaneous welding and other applications with increased power demand) or when pumping solid-state and fiber lasers. The beginning of series production is planned for the second quarter of 2009. Further details to the new development as well as to other new insights regarding high-power diode lasers will be revealed during three presentations (paper numbers: 7198-8, 7198-9 and 7202-3) at the Photonics West Conference LASE. Information about the complete product range of the Diode Lasers Business Unit of Jenoptik’s Lasers & Material Processing division as well as of TESAG will be available during Photonics West at the Jenoptik booth 1227 as well as at the booth 2038 of their American sales partner RPMC Lasers. Jena, January 20, 2009 Jenoptik’s Lasers & Material Processing division The Lasers & Material Processing division makes Jenoptik one of the leading providers of laser technology – from the component to the system. The division specializes in diode lasers and innovative solid-state lasers, for example disk and fiber lasers. Jenoptik is the acknowledged worldwide leader in quality of high-power diode lasers. Diode, disk and fiber lasers are developed as components or systems for customer applications and integrated into complete systems for laser material processing at the customers’ option. Jenoptik possesses process mastery of the entire value-added chain of laser material processing, including development, production and distribution, and is a reliable partner for their customers in the areas of process and systems development worldwide. Jenoptik successfully makes – from the semiconductor material to the laser source and laser system, through to the system and automation technology for entire facilities - laser processes available to meet a wide range of customer requirements. In the Diode Lasers Business Unit of the division Jenoptik has been developing, manufacturing and marketing high-power diode lasers for more than fifteen years. This new type of laser offers a high efficiency from very small volume. High-power diode lasers rank among the most promising lasers particularly because of their usage potential in the industry field. Jenoptik has the entire process chain for high-power diode laser covered—from the development and production of semiconductor material in Berlin in direct proximity to their technology partner Ferdinand-Braun-Institut für Höchstfrequenztechnik (FBH) over to the mounting of laser bars, the fiber coupling and optical beam guidance to the employment of the lasers, particularly as a source of pumping for solid-state and fiber lasers as well as a direct beam source in medical technology and material processing. Three Five Epitaxial Services AG (TESAG) has been part of the Diode Lasers Business Unit since December of 2008 and emerged in 1999 as a spinoff of FBH in its direct proximity in Berlin-Adlerhof. TESAG is one of the leading providers of epitaxial structures particularly for diode lasers, which has served to make it a very reliable, longstanding supplier of Jenoptik. The comprehensive know-how and extensive experience of the enterprise are based on close cooperation with FBH. Dr. Detlev Wolff Manager Sales & Marketing JENOPTIK l Lasers & Material Processing JENOPTIK Laserdiode GmbH Goeschwitzer Strasse 29 07745 Jena, Germany Phone +49 3641 65-4300 Fax +49 3641 65-4392 jold@jenoptik.com www.jold.com

You can edit or delete your press release Lasers & Material Processing: Jenoptik adds another manufacturing level to the Diode Lasers Business Unit here