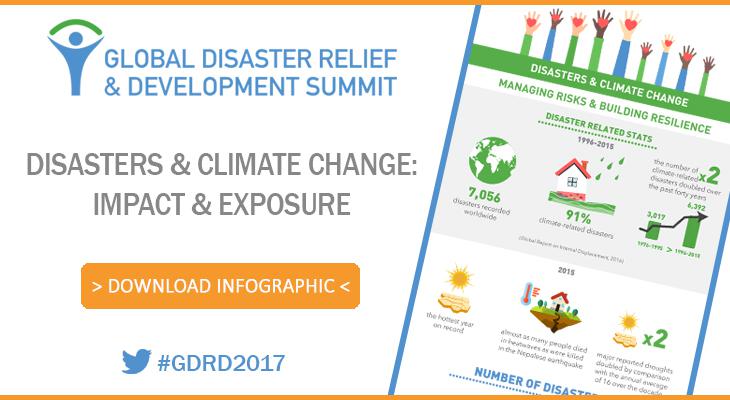 In the nearly twenty years between 1996 and 2015, there were 7,056 disasters recorded worldwide, which is double the number of disasters that happened during the previous two decades from 1976-1995. According to the infographic by the Aid & International Development Forum (AIDF), 91% of these disasters were attributable to climate or weather-related events. This also coincides with the dramatic increase in annual average temperatures marking previous decades. This trend has resulted in 2015 being the hottest year on record during the twenty years evaluated. As a result of high global temperatures, twice as many major droughts occurred during 2015 in comparison to the annual average of 16 between the period of 2006 and 2015. To view the full infographic, click here http://www.aidforum.org/infographic/disasters-climate-change-impact-exposureBetween 1995 and 2015, floods have affected the largest number of people, negatively impacting the lives of 2.3 billion (65% of the world population). During the same time period, drought affected 26% of the global population. Storms, similarly, affected 16% of the world. The year 2016 saw 11,000 people around the world killed by disasters. The deadliest of which being Hurricane Matthew. The event claimed the lives of more than 700 people, the majority of whom from Haiti. Storms in general, including hurricanes, cyclones, and tsunamis, have been found to have the most negative impact on residents of this planet. Between 1995 and 2015, almost 242,000 people lost their lives to one of the 2,018 storms recorded. However, storms come second in frequency right after floods, which have occurred at an increased rate of about 34% and now threaten 1 billion people around the world. In South America in particular, annual floods now affect an average of 2.2 million people per year.In 2015 alone, a total of 346 disasters were reported, with the majority taking place in Asia and the Americas. The United States faces a variety of disasters every year, especially as global temperatures increase. Wildfires are amongst the most frequent ones, 38 of which escalated to the point of disaster since 1995. These fires have affected 108,000 people in the country and caused $11 billion USD in damage.Around the world, a large percentage of the population is exposed to various types of natural hazards. One in three people are exposed to earthquakes globally and 414 million people are currently residing near to one of the 220 most dangerous volcanoes. There are also a good number of major cities with large populations which are threatened by natural catastrophes due to their geographic location and climate. Tokyo (Japan) was found to be the city most exposed to natural disasters, with Jakarta (Indonesia) and Manila (the Philippines) coming in second and third place respectively. The infographic was created in light of the 9th annual Global Disaster Relief and Development Summit, taking place on September 6-7 at the Ronald Reagan Building and International Trade Centre in Washington D.C. The Summit will gather 350+ decision makers from government and UN agencies, NGOs and the private sector who will be exchanging knowledge, sharing best practice and discovering innovations that help improve disaster preparedness and proactive mitigation. Expert speakers include:• John Service, STA Humanitarian Operations, HRD, Catholic Relief Services • Dr Joe Leitmann, Lead Disaster Risk Management Specialist, Team Leader, Resilient Recovery and Urban Resilience, Global Facility for Disaster Reduction and Recovery (GFDRR), World Bank Group • David Jones, Chief Executive Officer, Rescue Global • George Sullivan, Director, Individual & Community Preparedness & Resilience, American Red Cross • Richard Walden, President and Chief Executive Officer, Operation USA • Isaac Kwamy, Director, Global Programs, Humanitarian Disaster Management, NETHOPEFor more information about the Global Disaster Relief & Development Summit, visit http://disaster-relief.aidforum.org or contact Alina O’Keeffe at marketing@aidforum.orgGlobal Disaster Relief & Development Summit strives to enable quicker and better response during crises and catastrophes by improving effectiveness, cost-efficiency and sustainability of aid operations. This year’s programme will expand its scope beyond disaster relief and will look into emerging global challenges, innovations and opportunities in international aid and development sector. It will continue to focus on best practice in humanitarian logistics, emergency communication, supply chain, procurement, partnerships and financing of aid programmes. The agenda is developed in consultation with World Bank, UN OCHA, Red Cross, USAID, World Vision, UNOPS.3rd Floor, Two America Square, London, EC3N 2LU

10-11-2018 | Logistics & Transport
Reports Monitor
Disaster Relief Logistics Market 2018-2023
Disaster Relief Logistics Market Disaster relief logistics service providers must be equipped with require quantity of resources and expertise to aid the society during disasters. Also, these logistics companies offer information and communication technology platforms to aid in rescue operations. This market study identifies the increased need for handling logistics operations by professional logistics companies to be one of the primary growth factors for the disaster relief logistics market. A sample of
04-17-2018 | IT, New Media & Software
Unisecure : Data Center & Hosting Provider
Unisecure - Disaster Recovery guarantee your business continuity.
Conshohocken, US, 17th April 2018 | Unisecure, USA's leading IT solutions provider, is best when it comes to disaster recovery services ensuring business continuity. Their DRaaS is based on an analysis which helps in resistance, resilience, and recovery of mission-critical data of enterprises. Unisecure have Recovery Time Objective and Recovery Point Objective technologies to get your business back on track immediately. Unisecure disaster recovery services follow: Risk-impact Analysis: A Disaster is
08-24-2017 | Health & Medicine
Fraunhofer IAO
Better practice for disaster situations
Events such as the attack at Breitscheidplatz in Berlin or the train crash near Bad Aibling have shown that it is important for aid organizations, the fire service, the police, the German Federal Agency for Technical Relief, and relief agencies to be prepared for major incidents and catastrophes. Full-scale drills of mass-casualty incidents (MCIs) enable relief forces to take set pieces previously practiced in isolation, run them together and prepare
08-22-2017 | Energy & Environment
Aid and International Development Forum (AIDF)
[infographic] Disaster Preparedness and Prevention
Disaster preparedness methods and prevention infrastructure have been proven to mitigate the impacts of catastrophes on citizens around the world. As shown in the infographic by the Aid and International Development Forum (AIDF), every euro spent on disaster prevention efforts is predicted to result in €4 savings that would go towards response efforts. In 2016, the European Commission released a report of its planned investments for the countries in the
09-12-2016 | Politics, Law & Society
ITI-HOLIDAY
Environmental disaster in Vietnam
In Vietnam occurred the biggest environmental disaster since the deployment of Agent Orange by the Americans during the Vietnam War. It happened almost unnoticed by the world while Europe was busy with the refugee crisis and America with the forthcoming presidential elections of the USA. The perpetrators of the environmental disaster come from abroad and are supported by the Vietnamese politicians, similar as it was happen at the Vietnam War. "
03-16-2011 | IT, New Media & Software
Canzhi Ye App Dev
App Developer Donates to Japan Disaster Relief
The times ahead for the Japanese people will be tough. I have friends in Japan that have been affected by this terrible natural disaster. I want to do as much as I can to help. I will be donating 100% of my revenue from my iPhone app A+ FlashCards Study Helper (http://bit.ly/dZYqUG) during the week of March 15 - March 22 to Red Cross to help the victims of the
Comments about openPR
We publish our press releases on openPR.de because we like people who are "open" - just like us.
Frank Obels, CEO, INCONET - Informationssysteme, Communication und Netzwerkberatung GmbH