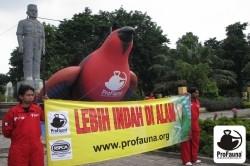 Thousands of parrots from the tropical wilderness of Papua and North Maluku are caught to supply domestic and international illegal wildlife trade every year. In their latest report released in 2008 entitled “PIRATED PARROTS”, the Indonesian wildlife protection NGO, ProFauna Indonesia, revealed evidence on the smuggling of wild caught parrots to the Philippines during their investigation. Meanwhile, the centre of domestic parrot trade is in Surabaya, where wild parrots are smuggled to big cities from Maluku and Papua.Based on the evidence documented by ProFauna Indonesia on t animal markets in Surabaya (Bratang, Turi, and Kupang markets, it shows that domestic trade of parrots remains high. Some of the most wanted species are the sulphur-crested Cockatoo (Cacatua galerita), Goffin Cockatoo (Cacatua goffini), Moluccan Cockatoo (Cacatua moluccensis), black-capped Lory (Lorius lory), and many more.In 2008, ProFauna recorded that approximately 1000 parrots were traded in Surabaya’s black markets. To disguise the protected birds from government inspection , traders do not openly display the parrots. Instead, the birds are kept in private houses nearby. If there is a potential buyer that expresses interest, they will bring him to where the endangered birds are kept. The illegal trade and ownership of protected parrots violate the 1990 Indonesian wildlife act , concerning the Conservation of Natural Resources and their Ecosystems. Accordingly, the perpetrators are liable to a maximum sentence of five-years in prison and a maximum of 100 million Rupiah (10,000 USD) fine.The increasing rate of parrot trade in Surabaya urges ProFauna to campaign on the protection of endangered parrots. On December 30th, ProFauna staged a demonstration to advocate the public not to trade parrots. With a four-meter parrot shaped helium-balloon, ProFauna demands law enforcement by the government to strictly curb parrot trade.ProFauna Campaign Officer, R. Tri Prayudhi stated that, ”Many cruelties happen behind parrot trade. The parrot’s death rate is as high as 40 % by the time they arrive at the sales points. During the process of poaching, transportation and trade, many of them die due to poor conditions and bad handling”. ProFauna believes that parrots are more beautiful in the wild. Particularly in Maluku and Papua, parrots in the wild also serve as a potential for tourism that can support the local economy.• ProFauna Indonesia (www.profauna.org) is an active and dynamic wildlife protection organization, established in 1994. ProFauna works through education, campaign, investigation, and rescue, to save wildlife in Indonesia. • For further information please contact: Butet A. Sitohang, International Communication Officer, mobile: +628133899741 or email: international@profauna.orgProFauna Indonesia Jl Raya Candi II/ 179 Malang 65146 East Java - Indonesia