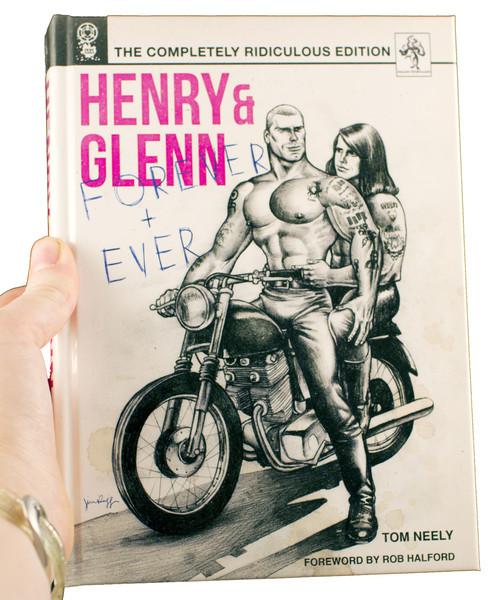 The greatest love story ever told -- now in a completely ridiculous edition.

Twenty short comic stories about the domestic life of "Henry" and "Glenn" and sometimes their neighbors "Daryl" and "John." Glenn deals with issues with his mother while Henry shows off his darker side and indifference. These are two men who truly suffer best together.

This book collects the entire series for the first time, adds even more never-before-published-pages, and features a spiffy hardcover to truly make this edition a complete (-ly ridiculous) collector's edition!

Love is so metal.

Get pumped on inspirational love with the coloring book of the century, celebrating the romance of the millennium: Henry & Glenn Forever. Bust out your rainbow crayons and make your own mark on the story of two tough men learning to express their emotions together.

The Henry & Glenn comic books have been wildly popular since their first publication in 2010, selling over 100,000 copies of various editions, and now fans can color their idols, including new content!

Praise for the Henry & Glenn series:

"One of my favorite uses of satire is a comic book that depicts me in a romantic relationship with rock vocalist Glenn Danzig. I have never opened a copy; I am happy to live the rest of my life never knowing what happens to the two of us in those pages. I am told that in the story, our neighbors are Hall and Oates! If I were to find that anything less than hilarious, then I am in the wrong business."
- Henry Rollins, LA Weekly

"I didn't think it was very funny. I thought it was a very crappy, opportunistic book. People are extremely stupid."
-Glenn Danzig, in an interview with Rolling Stone

"I wouldn't be the neighbor, but I'd be in the Satanic cult!"
- Daryl Hall

"An unauthorized work of fantasy, but so are the 'official' personas of Rollins and Danzig."
- LA Weekly

"What if Henry Rollins and Glenn Danzig were a gay couple who lived together?"
- VICE

"File under 'ludicrously awesome'."
- Just Out

Tom Neely is a prolific and highly acclaimed artist and cartoonist who is best known for the Henry & Glenn series, which he created with his artist collective The Igloo Tornado. His art has been featured in galleries, magazines, literary journals, and album covers. His other works include The Humans from Image comics, The Blot, and The Wolf.

Microcosm Publishing is a vertically integrated publishing house that equips readers to make positive changes in their lives and in the world around them. Microcosm emphasizes skill-building, showing hidden histories, and fostering creativity through challenging conventional publishing wisdom with books and bookettes about DIY skills, food, bicycling, gender, self-care, and social justice.

You can edit or delete your press release Henry & Glenn Forever & Ever! The Completely Ridiculous Edition and Coloring Book here

07-01-2020 | Arts & Culture
BookBuzz.net
Author Glenn Dyer Releases New Thriller - The Ultra Betrayal
Author Glenn Dyer Releases New Thriller - The Ultra Betrayal Author Glenn Dyer is pleased to announce the release of the second book in his Conor Thorn historical spy thriller series, The Ultra Betrayal. Released by TMR Press in June 2020, the book is already receiving rave reviews from readers and reviewers. One man's dark deal with the Nazis could bring the Allies to their knees... Autumn, 1942. Rule
04-16-2019 | Business, Economy, Finances, B …
Alternative Service Concepts
ASC PRESIDENT GLENN BACKUS SELECTED TO LEAD “CLAIMS MANAGEMENT CLAIMS PERFORMA …
Nashville, TN - Glenn Backus, President of Third Party Administrator Alternative Service Concepts (ASC) has been selected to present at RIMS 2019 Annual Conference & Exhibition, the premier risk management, and insurance conference. Mr. Backus will lead a discussion entitled, “Claims Management Claims Performance Indicators” that will explore how to measure the effectiveness of your claims program. This “Thought Leader Theater” educational session is scheduled for Tuesday, April
11-14-2016 | Business, Economy, Finances, B …
Alternative Service Concepts
ASC’s President, Glenn Backus to Co-Present Session at National Workers’ Com …
Alternative Service Concepts, LLC (ASC), a leading national third party administrator specializing in workers’ compensation claims administration, today announced that President, Glenn Backus will co-present “Takeaways From Alsco Inc.’s Strategy for Workers’ Compensation Litigation.” This topic will take place at the 25th Annual National Workers’ Compensation and Disability Conference & Expo in New Orleans, November 30 - December 2. “Takeaways From Alsco Inc.’s Strategy for Workers’ Compensation Litigation” will also
09-15-2016 | Sports
Pura Vida BJJ & MMA - Milwaukee
Pura Vida is proud to announce Rick Glenn will make his UFC debut!
Crime is on the decline. The number of violent crimes has taken a particular turn downward over the last decade or so. However, the rarity of physical assaults in no way implies their extinction. Every person has the right to defend themselves against bodily harm. And you should learn and hone the skills necessary to do so. No matter your age, weight, or gender, you are able to defend yourself. Enrolling
08-05-2011 | Industry, Real Estate & Constr …
Re/Max Alliance Group
Top Agent Glenn Brown Joins RE/MAX Alliance Group in Sarasota, Florida
SARASOTA, FL – Glenn T. Brown, one of the top Realtors in Sarasota, has joined RE/MAX Alliance Group in the Sarasota office at 2000 Webber Street. A veteran real estate professional with 20 years of experience, Brown specializes in golf course communities. Brown holds the Short Sales and Foreclosure Resource (SFR) designation from the National Association of Realtors (NAR), and is a 2010 recipient of the Quality
05-27-2011 | Business, Economy, Finances, B …
Meyer-Chatfield
Glenn Krietsch Joins Meyer-Chatfield's Expanded BOLI Sales Team
Meyer-Chatfield Corp., the leading BOLI and executive compensation resource for America's financial institutions, today announced that Glenn Robert Krietsch has joined the firm as Regional Director in Chicago. “We are very pleased to welcome Glenn to our team of BOLI Sales Specialists,” said Bennett S. Meyer, Chairman and CEO of Meyer-Chatfield. “Glenn has extensive first-hand experience in the community bank arena and can relate directly to bank officers’ needs and
Comments about openPR
OpenPR ist the nicest and most clearly laid out PR platform I have seen to this day. The press releases are displayed very nicely and clearly and without any unnecessary frills. The updates are fast and the finished release looks appealing and is clearly legible. Even with 16 years of experience one discovers new things from time to time. Congratulations!
Gabriele Ketterl, Director Marketing & PR, Menads