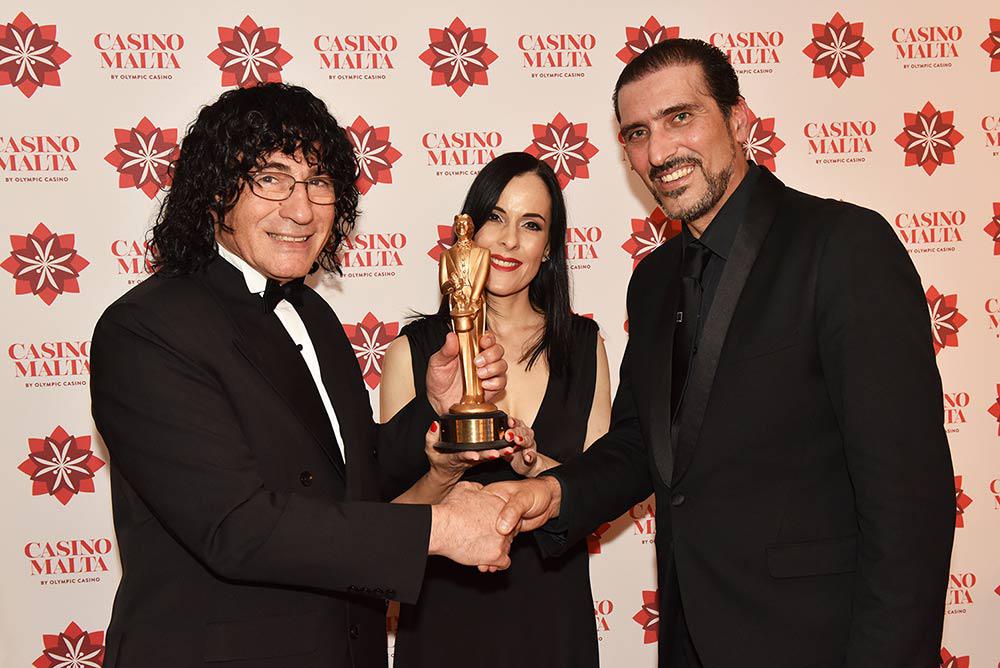 World President of the IMS, Mr. Tony Hassini flew in from the USA specifically for this occasion and presented the award during a live event at Casino Malta in St Julian's. The Merlin Award, is known as the Oscar equivalent to the magic industry, the highest honor bestowed by the magic community and is based on talent, showmanship, originality, skills and the ability to entertain under any conditions. Previous recipients include the likes of David Copperfield, Siegfried & Roy, Penn & Teller and Criss Angel among others.

“I am proud to honor and recognize Brian Role' and Lola Palmer for their extraordinary contributions to the magic community with their magic dinner show the Chamber of Mysteries.” commented Tony Hassini. “Their interactive, engaging style and amazing feats of magic have won them the respect and admiration of their peers and families all over the world and I am sure that this is only the start of much much more recognition and success in the years to follow.”

During the acceptance speech that followed, Brian stated ““The significance of this most prestigious award in magic, the Merlin Award, is years of hard work and persistence which have now been recognised internationally by the largest magic society in the world. Earning this most prestigious award for our dinner show, the Chamber of Mysteries, means so much to us and we truly are honored by this most prestigious recognition.” Whilst thanking all those who stood by and helped throughout the years, Brian thanked Mr Tony Hassini and the IMS for believing in them as well as the people and main sponsors, Casino Malta and Absolute Ent & Med Ltd, who were significantly essential to make the event possible.

More information about Brian Role', Lola Palmer and the Chamber of Mysteries can be found at www.chamberofmysteries.com or on Brian's website www.brianrole.com

Brian Role' is a world class magician who together with Lola Palmer provide magic performances across the globe in theaters, resorts, hotels, on cruise ships, for private and corporate events and other grand scale events. Their performance have been witnessed by thousands of people worldwide. Since 2000, they have performed in most of Europe, in China, India, Dubai, Qatar as well as in Mexico. They now run the most successful dinner show in Malta, "The Chamber of Mysteries" a weekly award wining show that has been running since 2011. The show has ben awarded the TripAdvisor certificate of excellence each consecutive year since 2011 and now the most coveted award among magicians, the Merlin Award regarded as the Oscar for magic.They are managed by Absolute Ent & Med Ltd in Malta.

You can edit or delete your press release Magician Brian Role` and Lola Palmer awarded most Prestigious “Merlin Award”, the highest international award for Magic here

09-15-2017 | Health & Medicine
Maetrics
Maetrics appoints Brian Moan to European Solutions Delivery Team
15 September 2017 – Maetrics, a global leader in life science consulting, has appointed Brian Moan to Director of Solutions Delivery in Europe. A highly qualified industry expert, Brian is a proven leader with a strong track record in regulatory compliance as well as product quality and design. With over 20 years of experience working with medical device manufacturers, Brian brings extensive industry experience to Maetrics and is ready
02-09-2012 | IT, New Media & Software
Common Sense Solutions
Mark Weiner and Brian Withey Join Common Sense Solutions
Common Sense Solutions, the Midwest’s leading provider of technology solutions for the construction and service industries, has hired Mark Weiner and Brian Withey to fill key software application service and development positions. As the new Manager of Application Consulting Services, Mark Weiner directly manages service delivery to clients and oversees application projects to ensure that they are completed on time within scope and budget to client satisfaction. “I understand the
01-05-2011 | Politics, Law & Society
Brian Andrew Tully, Esq.
BRIAN ANDREW TULLY JOINS ACADEMY OF SPECIAL NEEDS PLANNERS
Huntington, NY — Attorney Brian Andrew Tully, Esq. has announced that he has joined the Academy of Special Needs Planners. Among the many challenges facing parents of special-needs children is planning for the time when the parents will no longer be around to act as the primary caregivers. The Academy of Special Needs Planners assists attorneys in providing the highest quality service and advice to individuals with special needs and
12-23-2010 | Arts & Culture
Adelphi University
Adelphi to Host Exhibition Featuring Embedded War Photojournalist Brian Palmer
Adelphi University is proud to feature Improvisation as Strategy: Scenes from an Iraq Embed, a multimedia exhibition chronicling experiences by photojournalist and documentarian Brian Palmer as an embedded journalist in Iraq from 2004-2006. The exhibit highlights Mr. Palmer’s photography, journal entries, his documentary Full Disclosure, as well as additional clips not scene in the film. The exhibition will be on view from January 16 through February 20, 2011 in both
11-16-2009 | Arts & Culture
Agora Gallery
Brian Reed Creates Psychological Color Games in Metamorphosis
Chelsea’s Agora Gallery will feature New York artist, Brian Reed, in Metamorphosis. The exhibition is scheduled to run from November 20, 2009 through December 11, 2009 (opening reception: Thursday, December 3, 2009). New York-based artist, Brian Reed’s work moves between extremes that share a psychedelic color palette and kinetic sense of movement and energy. Always working from those visual constants, Reed experiments with traditional, region-specific aesthetic styles, like the torturous,
06-08-2009 | Politics, Law & Society
Kane Russell Coleman & Logan PC
Brian Fisher Joins Kane Russell Coleman & Logan
DALLAS/HOUSTON, Texas – Kane Russell Coleman & Logan is pleased to announce the addition of a new attorney. Brian J. Fisher joined KRCL as an associate on May 6, 2009, and practices in the litigation section of the Dallas office. His scope of practice involves personal injury claims, premises liability, products liability, auto and trucking liability, and commercial and business disputes. Mr. Fisher is a 2001 graduate
Comments about openPR
OpenPR ist the nicest and most clearly laid out PR platform I have seen to this day. The press releases are displayed very nicely and clearly and without any unnecessary frills. The updates are fast and the finished release looks appealing and is clearly legible. Even with 16 years of experience one discovers new things from time to time. Congratulations!
Gabriele Ketterl, Director Marketing & PR, Menads