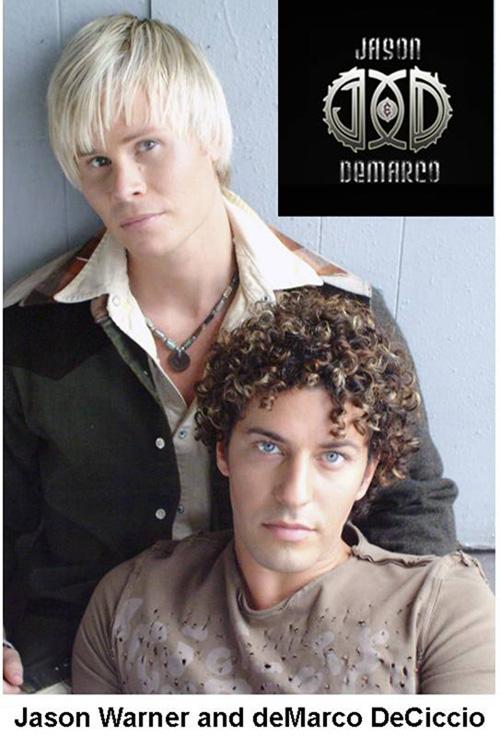 RALEIGH, N.C. (October 30, 2008)—St. John’s Metropolitan Community Church (MCC) of Raleigh, a church for all people founded on the “whosoever” principal in 1976, announces today that it is hosting a free concert and a musical worship service as part of its 2008 commitment to reach people for whom traditional religious practices, settings and messages have been off-putting.

“We’ve had to work hard at clarifying that although we are both gay men of faith, our music is not religious, nor gay,” says Jason Warner, of the music duo Jason and deMarco. “Our music has a message and if I had to call it anything it would be uplifting. We want to speak to everyone not only people of a particular faith.”

The weekend marks the 7th anniversary for Reverend Belva Y. Boone as senior pastor of St. John’s MCC. The church is offering these performances as a gift to her in support of her message that: “All people are God’s beloved, deeply loved, richly gifted, highly favored and abundantly blessed.”

“This will be the second time we have had the fortune of performing at St. John’s in Raleigh,” says deMarco DeCiccio. “The attendance and reception we received last year was overwhelming. We are looking forward to reaching even more people with our music this time.”

Jason and deMarco are pop-music recording artists who have attained international recognition as: Abercrombie and Fitch play-list favorite, 2006 MTV’s LOGO “Video of the Year” winners and featured in the Showtime documentary “We’re All Angles” from director Robert Nunez.

“These two young men have done an incredible job sharing the grace of God through music,” says Rev. Belva Y. Boone, senior pastor of St. John’s MCC. “I have known them for more than 5 years and have witnessed first hand the power behind their music.”

About St John’s MCC:
St. John's Metropolitan Community Church began as a small group of individuals who came together on the last Sunday in February, 1976, to study the Gospel of John. Facilitated by South Eastern Baptist Seminary graduate, Rev. Willie White and his partner Robert Pace by June of 1976, they voted to affiliate with Universal Fellowship of Metropolitan Churches. In July of 2001, St. John's called The Rev. Belva Y. Boone to serve as its fourth Pastor. Committed to "find them, bring them in, grow them up and send them out," Rev. Boone is leading St. Johns into a new vision for ministry in, with and among God's people. For more information, visit www.stjohnsmcc.org, or call (919) 834-2611.

About Jason and Demarco:
As Jason & deMarco’s new album SAFE was released earlier this year, the documentary-film, We're All Angels, from director Robert Nunez, turned the spotlight on how they integrate their sexuality and spirituality within their relationship and professional careers. We're All Angels premiered on the SHOWTIME network in June 2008. Jason and deMarco are founders of RJN MUSIC and Letthead Productions. Their single, "This Is Love" became an Abercrombie and Fitch play-list favorite as well as "Music Video of the Year 2006" on MTV's LOGO. Jason & deMarco tour internationally in various venues, and continue sharing their music and message with the community of faith around the world. The duo performs over one hundred concerts per year.
For more information about Jason and deMarco visit www.jasonanddemarco.com or call 1-888-RJN-MUSIC (756-6874)

About Jason Warner:
Jason Warner is the oldest son in an entertainment family. He grew up on the eastern shore of Maryland and began singing at an early age, traveling with his mother in music ministry. His grandmother often called him 'lungs' because she could hear him coming down the street as a baby. In 1996, Jason toured with the professional contemporary Christian recording group, Truth, and then in 1997 and 1998, with the group The Sound. On the road and in the studio with these groups, he learned about music management, direction, production and booking. Jason graduated from Lee University in Cleveland, TN in 1997 with a BA degree in Music and Sociology. The following year, he founded his own independent recording label, RJN MUSIC, originally based in Nashville, TN. Says Jason, "although the foundation of my morals, spirituality, and ideals were a result of my strict Pentecostal upbringing, my spiritual beliefs have broadened along with my musical style. I've always pushed myself to break down barriers and cross boundaries in order to reach people from all walks of life, because I believe that music is the universal language of the soul and has the ability to bring people together."

About deMarco DeCiccio:
deMarco DeCiccio's earliest memories of music take him back to nursery school where he was taught to sing nursery rhymes by Catholic nuns. He later furthered his love for music and theater by studying at the Etobicoke School for the Performing Arts, and in 1999 he graduated with a B.A. degree in Music and Languages from York University in Canada. deMarco's debut album was a series of love songs, sung in Italian, called "Melodie." Since relocating to Los Angeles in 1999, deMarco has performed in a number of theatrical productions, and has appeared in several national commercials.

04-06-2021 | Science & Education
Dr Jason D Heap--International Education Consultant
Dr Jason Heap Receives NPQH Qualification
Dr Jason D Heap—a graduate of The University of Oxford, Sheffield Hallam University, Howard Payne University, and Walden University—earned an NPQH qualification from the United Kingdom’s Department of Education. The NPQH, or National Professional Qualification for Headship, adds to Dr Heap’s experience and academic training as a school leader. His consultancy is now in its sixth year of global service, and Dr Heap celebrates the work that has been achieved
03-22-2011 | Tourism, Cars, Traffic
Siam Hotels & Resorts
Siam Bayview Hotel Welcomes New EAM: Mr Jason Villarino
Siam Hotels & Resorts is proud to introduce Mr Jason Villarino as the new Executive Assistant Manager in charge of Food and Beverage (F&B) at the group’s four-star beachfront Pattaya City property, the Siam Bayview Hotel. Jason brings with him over a decade of executive F&B and management experience in the hospitality industry, underscored by a superlative track record with award-winning hotels and restaurants both domestically and abroad. Of German and
03-12-2008 | Politics, Law & Society
Jason Steele for Florda House District 31
Florida Teenage Republicans Endorse Jason Steele
Titusville, Fl- Chairman Clinger endorsed Jason Steele for House District 31 today. Chairman Clinger made the following comments in his endorsement: "I have been privileged to know Jason Steele since I began attending the REC meetings of Brevard County. Jason Steele is a true conservative, and will lead in the most pressing issues of our day. He has previously served the people of Florida, and I can assure those in
08-28-2007 | Advertising, Media Consulting, …
Voices.com
Voice Talent Jason McCoy Wins Voices.com 60 Second Pitch Contest
Toronto, Canada - August 27 -– Nothing in business makes Jason McCoy happier than performing a variety of voice overs. For example, Jason loves reading and voicing everything from audiobooks, to commercials, to IVR scripts; he loves them all, especially since they come with the added bonus of being able to work from the comfort of his own home, yet, allow him to be heard everywhere. Recently, that passion was
03-02-2007 | Arts & Culture
RAANDESK Gallery of Art
RAANDESK Presents "Filmic Flashes" by Jason Bryant
The RAANDESK GALLERY OF ART is presenting the cinematic inspirations of Jason Bryant in the show entitled “Filmic Flashes.” The paintings examine the link between film and perception, and comment upon escapism. Through large scale cropped portraits of celebrity faces and movie stills, famous subjects are depersonalized, spotlighting how all lives hold cinematic moments of their own. The close up and partial images also relate to one’s inability to fully
01-03-2007 | Media & Telecommunications
IwebRadio.com
Jason Aldean on iWebRadio.com Jan 13th, 2007
In 2006 international country music editor and journalist Christian Lamitschka joined the team of iWebRadio.com. Country Fans around the world get the chance each second Saturday from 11:00 am - 2:00 pm Eastern Time (North America) on iWebRadio.com to listen to what their favorite Stars from Nashville like to share with the fans. For 2007 there are still some of Country Music\'s biggest names waiting to be a part of
Comments about openPR
OpenPR ist the nicest and most clearly laid out PR platform I have seen to this day. The press releases are displayed very nicely and clearly and without any unnecessary frills. The updates are fast and the finished release looks appealing and is clearly legible. Even with 16 years of experience one discovers new things from time to time. Congratulations!
Gabriele Ketterl, Director Marketing & PR, Menads