Digital Diva Comes to Woodland for One Night 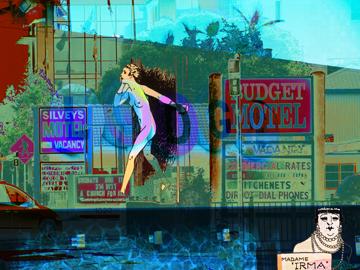 For one evening only, First Friday, November 7th, the work of Ann Tracy, a self-proclaimed digital alchemist, will be featured at Photogenics, 415 First St., Woodland from 6 to 9 pm. The exhibit will feature work from the new Motel Variations series as well as the Power: Grids and Shapes series.Ann’s fine art has been exhibited from Japan to Maui to New York City. In 2003 her work, “Stop” was included in the catalog of the “Violence Against Women” exhibition, Group 78 Amnesty International, Tokyo, Japan. Her digital painting “Message 3” has been juried into the 2008 edition of American Art Collector. She has also presented a creativity workshop to feature writers at the Sacramento Bee, a daily newspaper.She has had solo shows during 2008 at Asylum Gallery and Luna’s Café, both in Sacramento. Her work has recently been juried into the Digital Art Guild’s show at the Bonita Museum near San Diego (10-11 2008) and will also exhibit in “Greetings from Nada Motel” at the Barrick Museum (UNLV) in Las Vegas from January to April of 2009.Her work is also included in the following web projects: “Me & My Shadow” http://www.selfshadows.com/ open project created by Javier A. Bedrina, Madrid, Spain; “The Bile Rose in Her Throat” - The Art Project: Artists Respond to Terrorism http://www.theartproject.net/ and “Merce Would be Proud” - Digital Pocket Gallery http://www.ikatun.com/digitalpocketgallery/june_pocket_list.html#Ann_TracyAnn spent 10 years as a radio and print journalist in Denver, Milwaukee, San Jose and Sacramento. She was the first female voice to grace the airwaves of KTLK, Denver in 1977, in her first job as a radio news announcer.She is also a director, actor, writer and video artist. As the founding artistic director of Beyond the Proscenium Productions in 1994, she has directed twelve original works and eight regional premieres for the company. Ann is the author of nine scripts, seven of which have been produced in California.As an actor, Ann has appeared on stages in Northern California and Milwaukee, WI and in the movie George B. which premiered at the Sundance Film Festival, as well as the independent features Capital Women (PCS Festival 2007) and Anna’s Cross (2008 festival submissions. She will be shooting her next film (Bittersweet-David Lignon Films) this coming November.Ann Tracy is an ArtistPhotogenics Gallery 415 First St., Woodland CA 95695 George Streng - 530-666-9009Ann Tracy @ 916-804-6095 or anntracy51@gmail.com

02-02-2009 | Arts & Culture
Ann Tracy
"Greetings From Nada Motel" Continues at Las Vegas Museum
"Greetings From Nada Motel", an art exhibition celebrating the best of the best from Reno's 2008 art-in-motel rooms event, Nada Motel, continues at the Marjorie Barrick Museum of Natural History and Culture, 4505 Maryland Parkway, Las Vegas, Nevada 89154 until April 20th, 2009. The art on display runs the gamut from digital photography and mixed media work to painting to assemblage to sculpture to video created by the 23
05-05-2008 | Arts & Culture
Ann Tracy
Digital Art Comes to Luna’s Café in Sacramento
“Power: Lines & Shapes”, a news series of digital fine art by Ann Tracy will grace the walls of Luna’s Café, 1414 16th St., (between O & N Streets) from June 9th to July 19th . There will be a Second Saturday reception on June 14th from 5 to 7 pm. Luna’s is open Monday to Friday at 8 am and closes at 4 pm on Monday and