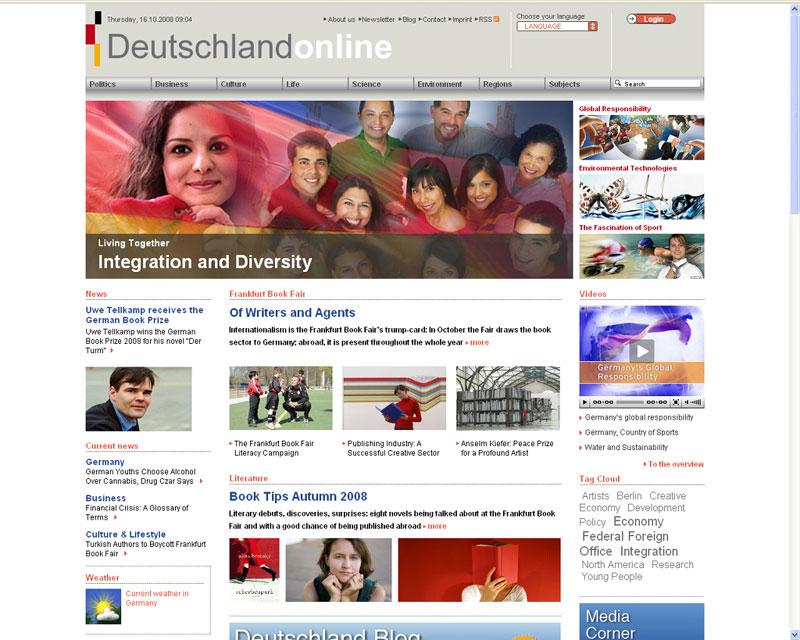 now a cross-media resource in ten languages with Web 2.0 functionality and featuring a media service for international journalists and multipliers

Deutschland Online – Forum for Politics, Culture and the Economy – is launching its new website in time for the Book Fair in Frankfurt-am-Main. It is a modern, cross-media site offering users many new and useful functions. At www.magazine-deutschland.de you can find the articles and main themes from the print version of Deutschland magazine, plus a lot of useful and relevant additional information about Germany, including of course the latest news. Deutschland is a cross-media resource implemented by Societäts-Verlag, Frankfurt-am-Main, in cooperation with the Federal Foreign Office.

The new layout is modern, fresh and clearly structured. It offers easy access to the wide range of content in the various sections: Politics, the Economy, Culture, Life, Science, Environment, Regions and Subjects. Large-scale panoramic images guide users to topical theme packages and make it easy to navigate the website.

Deutschland Online also uses multimedia (e.g. videos and animations) to present its contents. And, of course, the new Internet service also features Web 2.0 functions such as RSS feeds and an RSS reader as a desktop widget. There are also social-bookmarking opportunities, a keyword cloud (tag cloud) in all ten languages and mash-ups with partner sites Facts about Germany and Young Germany.

The weblog offers direct interaction between editorial staff and readers. To feature the Frankfurt Book Fair, the first blog category is German and international literature.

With 11 language editions in 180 countries, Deutschland magazine is Germany's most international periodical. Deutschland is the magazine for decision-makers outside Germany. Deutschland provides background analyses, informs its readers about topical issues in Germany and Europe, and reports on bilateral relations between Germany and other regions of the world in its regional editions. Almost 1.5 million people read the magazine worldwide. Deutschland is published six times a year by Societäts-Verlag, Frankfurt am Main, in cooperation with the Federal Foreign Office, Berlin.