ProFauna Demands for the Illegal Wildlife Trade in Sumatera to Stop 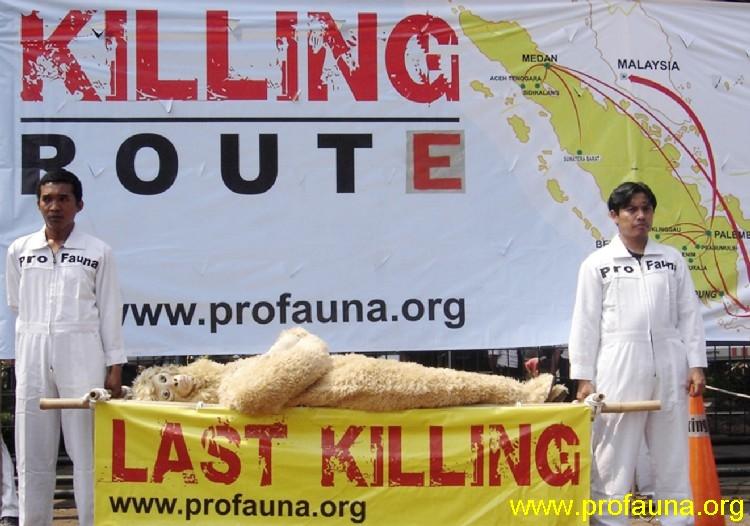 The illegal wildlife trade is rampant in Sumatera Island; Lampung, Palembang, Bengkulu, Riau, Medan, and Aceh regions, according to a recent investigation conducted by ProFauna Indonesia in collaboration with the International Fund for Animal Welfare (IFAW) in 2007.Thousands of wild animals are caught from the wild in the Island to supply the domestic and international illegal wildlife trade. Unrestricted international trade in wildlife and wildlife products threatens many species or their populations with endangerment and extinction said Jorge Luis Basave IFAW’s Asia Pacific Wildlife Campaigns Officer.The alarming high level wildlife trade in Sumatra prompted ProFauna Indonesia’s activists to stage a demonstration called "Last Killing” on 17 September 2008 in front of the Forestry Ministry Office in Jakarta. In their campaign, ProFauna urges the government to curb and stop the illegal wildlife trade in Sumatra. The wildlife trade has become a serious threat to wildlife conservation. It has been proven that the illegal industry is pushing many species’ death rates beyond sustainable levels. The investigation also uncovered the cruelty and crime of the illegal wildlife trade. Thousands of animals die inhumanely due to brutal poaching methods, poor transportation, bad handling and an incorrect diet. Illegal wildlife trade in Sumatra usually takes place in a discreet manner; however, in some locations like Bintang animal market in Medan, North Sumatera, and 16 Ilir animal market in Palembang, South Sumatera, it happens openly. Many protected species like the slow loris, agile gibbon, mitered-leaf monkey, langur, eagle, sulphur-crested Cockatoo, siamang, sun bear, etc., are sold in these two markets. Many are smuggled to Jakarta by plane to supply the domestic markets and to Singapore and Malaysia through Belawan and Tanjung Balai ports.In just half a year, at least 30 tones of pangolin meat, otherwise known as scaly ant eater, are smuggled from Sumatera. The central hub is in Palembang, South Sumatera. The vast majority of this bush meat ends up in Malaysia. While a kilogram of pangolin meat is about 10 USD in Palembang, it costs around 200 USD per kilo in Malaysia. On 30 July 2008, the Indonesian police have successfully raided illegal traders and confiscated 8.3 tonnes pangolin meat in the city. Sumatera is also the center of primate suppliers to pet markets in Java Island. Every year, roughly 15,000 primates from Sumatera are smuggled to animal markets in Jakarta and other markets in Java. The primate species primarily traded are the long-tailed monkey, pig-tailed monkey, slow loris, mitered-leaf monkey, langur, agile gibbon, and siamang. The major suppliers are located in Lubuk Linggau and Prabumulih regions in South Sumatera. According to the 1990 wildlife law regarding Natural Resources and Ecosystem Conservations, trading in protected species is prohibited. Offenders will receive up to a 5 year jail sentence and up to IDR 100 millions (US$ 11,000) in fine. Asep R. Purnama, ProFauna’s campaigns officer, stated,”The Forestry Ministry and the Police must conduct operation to curb the rampant wildlife trade in Sumatera. To tackle the illegal trade, the confiscation operation should be followed by law enforcement.” Illegal wildlife trade is a cruel crime that must not go unpunished.Editor’s notes:· For further information please contact Butet A Sitohang, International Communication Officer, mobile: +6281333899741 or email: international@profauna.org· ProFauna Indonesia is an active and dynamic wildlife protection organization established in 1994. With the support of its members all over the country, ProFauna saves wildlife through campaign, education, investigation, and animal rescue.· About IFAW (International Fund for Animal Welfare). Founded in 1969, IFAW works around the globe to protect animals and habitats promoting practical solutions for animals and people. To learn how you can help, please visit www.ifaw.orgButet A. Sitohang International Communication Officer ProFauna Indonesia Jl. Raya Candi II/ 179 Malang 65146 Indonesia www.profauna.org email:international@profauna.org mobile: +6281333899741 phone: +62341570033 fax: +62341569506