Is Darren Clarkes new Putter part of the success he has recently had? 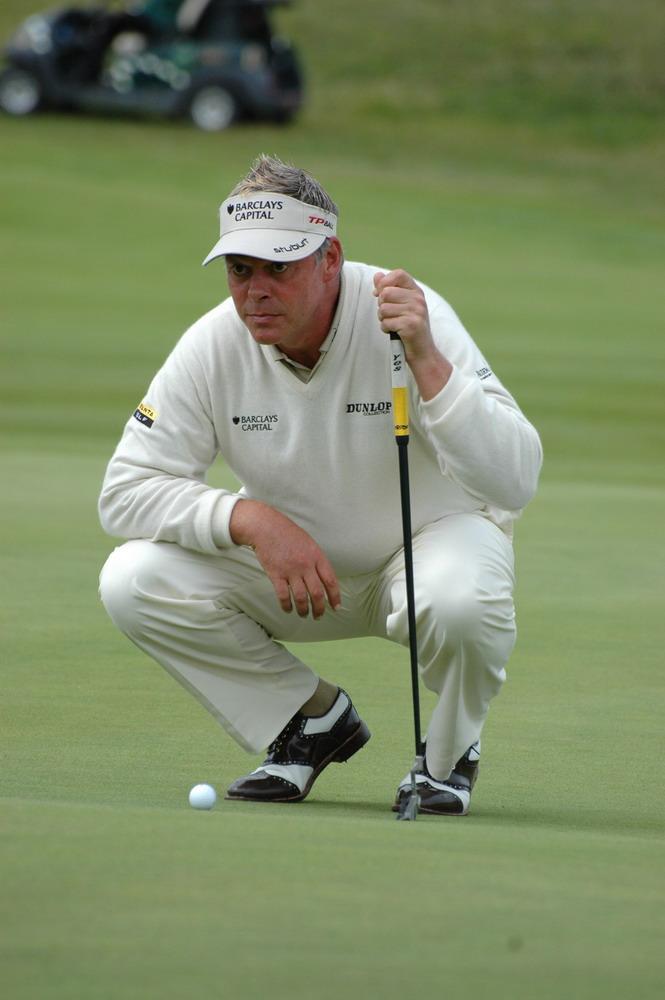 Darren Clarke with his Callie C-Groove Putter with prototype Shaft

Darren Clarke has won the Dutch Open in Zandvoort, near Amsterdam with a fantastic final round of 66 and a 16 under par total.It was a performance that knocks on Ryder Cup captain Nick Faldo’s door and a reminder that the Ulsterman can provide the experience Nick may be looking for to take into battle at Valhalla.With a record of three wins out of three in the 2006 Ryder Cup, after a long layoff because of his late wife Heather's terminal illness, Clarke's recent surge of good form, including a sixth place in the WGC at Akron, will surely impress Faldo.It is interesting to note that Clarke’s resurgence to form has coincided with him picking up a new Yes! C Groove Putter.Director of Instruction for Harold Swash Putting School, Phil Kenyon, who is putting coach to many of the professionals on tour and whom represents Yes! Golf tells us more.“The putter Darren picked up in Loch Lomond this year has a prototype shaft we have been developing. It’s a black coloured shaft that has weight located in a specific area, which very much changes the properties of the club and in turn performance. Darren loved it as soon as he picked it up. The testing we have done has shown it can help improve a player’s tempo and rhythm as well as stability and consistency in their stroke. There have been a few guys out here that have tested it in practice but Darren was the first one to put it in play and he has had great results with it since”Swash Putting Schools Asia/Pacific, Australia, South Africa, Middle East Oakrig House Canning Road Southport Merseyside England United Kingdom PR9 7SWContact: Michel Monnard, Apartado 44, 07580 Capdepera (Mallorca/Spain) Email: michel@swashputtingschools.com Phone: 0034 639635634About YES! Golf Yes! Golf, based in Denver, Col., is the proven leader in grooved putter technology. Harold Swash, known as the European putting doctor, introduced the innovative theory of concentric grooves in 1995. Today, C-Groove putters are taking the golf world by storm making Yes! Golf one of the fastest growing putters on the professional tours. For more information on Yes! Golf call 800.845.4327 or www.yesgolf.comAbout Harold Swash Putting School of Excellence Harold Swash is making his teaching philosophy available for all keen golf teaching professionals who want to learn how to teach Putting better. For more information about The Harold Swash Putting School of Excellence go to www.swashputtingschools.com

You can edit or delete your press release Is Darren Clarkes new Putter part of the success he has recently had? here

07-28-2020 | Arts & Culture
BookBuzz.net
Aiming High: How a Prominent Sports and Celebrity Agent Hit Bottom at the Top By …
Aiming High: How a Prominent Sports and Celebrity Agent Hit Bottom at the Top By Darren Prince Best-selling author, Darren Prince is pleased to announce the promotion of his memoir, Aiming High: How a Prominent Sports and Celebrity Agent Hit Bottom at the Top. With the foreword written by Earvin “Magic” Johnson, Price talks about how to turn your bottom into your beginning. Darren shares a story of soaring heights and
10-02-2018 | Associations & Organizations
LeakTronics
LeakTronics founder Darren Merlob to Speak At The 2018 International Pool And Sp …
Talking about the forefronts of Commercial Leak Detection Technology, President and Founder of LeakTronics Darren Merlob shares his insights in Las Vegas on October 31st from 12:30 - 1:30 pm.   The International Pool and Spa show launches the Expo season during the biggest weekend in Las Vegas - Halloween weekend. Taking place at the Mandalay Bay exposition hall, the show is all encompassing for Pool and Spa professionals and will bring
02-27-2012 | Business, Economy, Finances, B …
DPR Ltd
DPR Ltd diversifies in Security Services
One of Leeds’ leading roofing companies, DPR Ltd has recently launched a new ‘security services’ brand that will offer domestic and commercial customers the complete range of CCTV Systems, Burglar Alarms and Security Systems. DPR Secure will be run by directors Darren Rickett and Shaun Crutchley and aims to supply, install, maintain and repair a diverse range of security products. Working alongside major manufacturers such as Panasonic, Menvier, Firesafe, RISCO
09-28-2010 | Industry, Real Estate & Constr …
Senior Hargreaves
New Board Appointment for HVAC Ductwork Specialist
Heating and ventilation ductwork manufacturer and contractor, Senior Hargreaves, has appointed Darren Webster as the new operations director. In his new role Darren will be responsible for all commercial, industrial and fire ventilation contracts from order to completion. Darren started as a draughtsman in 1986 with Hargreaves, quickly progressing to engineer, senior engineer and contracts office manager. “It was as contracts office manager that I realised that there
06-18-2010 | Fashion, Lifestyle, Trends
The Storytellers
Resident DJ, Ministry of Sound DJ Darren Tate @ CIBO, Hotel Janpath
As the temperatures dropped, DJ Darren Tate in association with SkodaAuto turned up the heat at the console with his blended signature beats, sexy vocals and smooth house beats into one unique set. After rocking dance floors across Europe with his innate unrivaled enthusiasm, DT8 brought the sonic powers alive in his first ever performance in India on June 11th @ CIBO, Janpath Hotel, New Delhi. Skoda Auto India is
01-27-2009 | Arts & Culture
Bianca Limbach
Markus Winter presents John Cake and Darren Neave aka The Little Artists in Berl …
Art as a financial product and lifestyle Both artists, hailing from Leeds, comment through their work on the "BritArt" scene based around Charles Saatchi and artists of the early 90s like Damien Hirst, Rachel Whiteread, Jake and Dinos Chapman, and Tracey Emin. They reconstruct this scene and the works of these artists through the use of toys, such as Lego figures or a Carrera racetrack. "By using children’s toys as
Comments about openPR
I can't but agree to the positive statements about your portal: easy to use, clear layout, very good search function, and quick editing!
Jens O'Brien, Borgmeier Media Communication