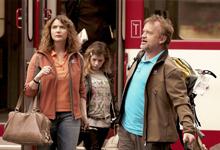 The Glymur jacket from 66°North draws attention in one film after another The hottest garment in movies these days is the Glymur softshell jacket from 66°North. Anita Briem wears this type of jacket in the movie Journey to the Center of the Earth, and the jacket has received a lot of positive attention internationally. This has among other been seen in increasing sales of the jacket in 66°North’s online store, www.66north.com, since the movie‘s premiere this summer.The newest film where stars don clothes from 66°North is the French movie Humanis which will be premiered in the beginning of 2009. Humanis is about a group of scientists who are probing into the development of Man, and a family that must fight for their lives in a ravine in the Swiss Alps. Some of best known actors of the French movie scene star in the movie, among them Dominique Pinon, well known from the films Amélie Poulain and Delicatessen. The following image shows Pinon and the actress Elise Otzenberger wearing Glymur softshell jackets from 66°North.For further information contact: Helga Vidarsdottir - 66°North's Vice President of Marketing E-mail: helga@66north.is Tel: +354 535 6600Company's address:66°North Midhrauni 11 IS-210 Garðabaer IcelandAbout 66°North 66°North Ltd. is among Iceland’s oldest manufacturing companies. It was established in the year 1926 and has throughout the decades been a leading producer and innovator in the making of working clothes used on sea and land, made for the toughest outdoors working conditions on the planet. In the past decade, 66°North has leveraged its expertise into a wide selection of outdoor clothing for sports and leisure. It has received numerous awards for its designs and marketing campaigns.The company’s staff today numbers more than 300 people. It operates 9 shops in Iceland under the names of 66°North and Iceland Gift Store, as well as a shop in Latvia and two shops in Lithuania. Furthermore the 66°North brand is sold in retail stores in Europe and North America.For further information about 66°North visit our international website, www.66north.com.

04-14-2011 | Fashion, Lifestyle, Trends
66°North
Jake Gyllenhaal is Big on 66°NORTH
The Hollywood star Jake Gyllenhaal spent the last weekend in Iceland. Mr. Gyllenhaal has starred in a number of movies, among the Brothers, where he was in one of the leading roles with Tobey Maguire and Natalie Portman. Sigurjon Sighvatsson was the producer of the movie, and the actors got to know 66°NORTH outdoors clothes while shooting the film. Jake was immediately impressed by the quality and looks of 66°NORTH, and
02-14-2011 | Fashion, Lifestyle, Trends
66°North
66°NORTH wins one of Europe’s biggest outdoor design awards.
Ispo, one of the biggest international trade fairs for sporting and outdoor goods, is now in full swing in München Germany. Ispo annually honours the most innovative products for the outdoor sector with ispo Outdoor Awards. The best new products for the next season are honoured with this award. All the brands that take part in ispo may submit items for consideration, meaning that only the best of the best
12-11-2008 | Fashion, Lifestyle, Trends
66°North
Rock star dons 66°North
The British musician Gavin Rossdale and his wife, pop-singer and fashion icon Gwen Stefani, were present last weekend at a ski tournament that is held annually in Deer Valley in Utah. The family went skiing and Gavin even took part in the tournament. We have no reports of his success there, but one thing is clear which is that he knows how to choose the right outdoor wear, as he
06-04-2008 | Fashion, Lifestyle, Trends
66°North
Jake Gyllenhaal wears Glymur 66°North jacket
The newest issue of US Weekly features a whole page of Jake Gyllenhaal wearing a black Glymur breathing jacket from 66°North. On the picture, he is walking down a street in LA happily with his girlfriend, Oscar winning actress Reese Witherspoon. Jake Gyllenhaal is not the only celebrity who likes donning the clothing of 66°North for as many know, film directors Quentin Tarantino (Pulp Fiction, Kill Bill) and Eli Roth (Hostel)

06-08-2017 | Energy & Environment
ReportsWorldwide
Agrochemicals Market in North America
ReportsWorldwide has announced the addition of a new report title North America: Agrochemicals: Market Intelligence (2016-2021) to its growing collection of premium market research reports. The report “North America: Agrochemicals: Market Intelligence (2016-2021)” provides market intelligence on the different market segments, based on type, active ingredient, formulation, crop, and pest. Market size and forecast (2016-2021) has been provided in terms of both, value (000 USD) and volume (000 KG) in the
03-24-2017 | Health & Medicine
Persistence Market Research Pvt. Ltd
North American Surgical Gowns Market
The North American Surgical Gowns Market report provides in-depth analysis of parent market trends, macro-economic indicators and governing factors along with market attractiveness as per segments. The report also maps the qualitative impact of various market factors on market segments and geographies. The global surgical apparels market is growing at a significant rate due to increasing number of surgeries, and technological advancement in the field. Some of the surgical apparels available
04-20-2011 | IT, New Media & Software
darcydevelopments
Web Design in North London
Darcy Developments has moved to the West Hampstead area of North London. Originally based in Manchester and building up a strong client base there, including the exclusive Manchester Grammar School, they have decided to up shop and make the move to the big city. They specialise in Web Design, with an emphasis on clean, simple layouts with a strong message associated with it. They also provide ecommerce solutions such as Paypal integration
03-07-2011 | Tourism, Cars, Traffic
Media Solutions Marketing
The Jewel of the North
It is fair to say that Blackpool is a well known holiday destination not only in the UK and Ireland but also around the world, and is known as ‘The Jewel of the North’, or some refer to Blackpool as the ‘playground of the North, or even ‘Britain’s Las Vegas’. This ‘Jewel’ has much to offer the tourist, it is a very traditional English Victorian seaside town, boasting many attractions, such
12-13-2010 | Tourism, Cars, Traffic
LTC Tours
LTC North India Tour Packages
LTC TOURS is one of well known travel tour operator among the tourist from all over the world, touring India, Thailand, Malaysia & Singapore, Srilanka, Dubai, London, Paris and more. Our one of the tour package is LTC North India Tour Packages in which we are exploring the complete beauty of North India like Delhi, Rajasthan, Bikaner, and Jaisalmer. In LTC North India Tour Packages, we cover Rajasthan culture, heritage, forts
06-08-2009 | Sports
ClickCulture
ClickCulture Promotes North Carolina Worldwide
Race Team Sponsorship Includes North Carolina Flag Vehicle Wrap RALEIGH, N.C. (June 8, 2009)—ClickCulture Inc. (clickculture.com), a Raleigh-based Web technologies, design and integrated marketing firm, announces today its sponsorship of Creation Autosportif (creationsport.net). The sponsorship includes the North Carolina state flag graphically wrapped on Creation's Le Mans race car. The newly wrapped car will debut at the 77th running of the Le Mans 24 Hour race, held June 13 and 14
Comments about openPR
OpenPR ist the nicest and most clearly laid out PR platform I have seen to this day. The press releases are displayed very nicely and clearly and without any unnecessary frills. The updates are fast and the finished release looks appealing and is clearly legible. Even with 16 years of experience one discovers new things from time to time. Congratulations!
Gabriele Ketterl, Director Marketing & PR, Menads