Scout Your Next Challenge Coin with an Exclusive USMC Sniper Coin 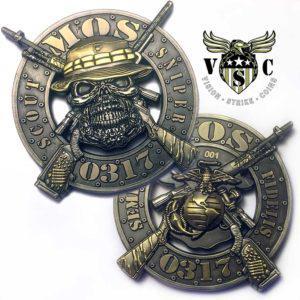 The dangers of a sniper are pretty intense. If they weren’t, then they wouldn’t be considered dangerous. Vision Strike Coins honors the USMC snipers with a new exclusive military challenge coin. We present to you the USMC MOS 0317 Scout Sniper Coin.Snipers can scout their target for hours and even days before they fire the first shot. Hopefully the first is the only. A one shot, one kill. The honor of a USMC Sniper goes without saying that it is not far behind from being the most critical position in all of the United States Armed Forces. Navy Seal Snipers are in front as most would argue.The USMC MOS 0317 Scout Sniper Coin was crafted for USMC active duty, veterans, and prior service. It has a 2 inch size, a 4mm thickness, and 3D accents. In addition, this exclusive military challenge coin has zinc made material with multi-tone metals and enamels. Its antique silver and gold color way complete the medallion feel and make this coin a great gift for anyone in the USMC.Found at: https://vision-strike-coins.com/product/military-challenge-coins/usmc-military-coins/usmc-mos-0317-scout-sniper-coin/Vision Strike Coins forges the highest quality coins designed in America! We take pride and are inspired to produce the finest coins for America's very best and we do this because of the hard work, dedication and sacrifice of our active duty military, retirees, US Veterans and prior service. It is an honor to serve you.Vision Strike Coins 4802 SW Scholls-Ferry Rd Ste C Portland, OR 97225

05-09-2017 | Fashion, Lifestyle, Trends
Vision Strike Coins
Vision Strike Coins Joins the Ranks with USMC Lance Corporal E-3 Rank Coin
The United States Marine Corps is the most prestigious branch in the United States Armed Forces. They are also considered the elite force to put on the ground when it comes to war. However, not everyone becomes part of that elite ground force. We all have to start somewhere. Vision Strike Coins has an exclusive military challenge coin for all the USMC ranks. We present the USMC Lance Corporal E-3
04-27-2017 | Fashion, Lifestyle, Trends
Vision Strike Coins
USMC Receive a Taste of Greek Honor with New Challenge Coin
Remember the movie 300? Well Vision Strike Coins is giving the USMC a bit of Spartan flavor with a new exclusive military challenge coin. We present to you the USMC Spartan 300 Helmet 4 Inch Magnum Coin. The movie 300 taught us all we needed to know about the Spartans. This elite class of warriors defended their homeland by taking on the most gruesome battles ever. Our USMC service members fight
03-21-2017 | Fashion, Lifestyle, Trends
Vision Strike Wear
USMC Spartan Helmet Coin Holds Rank with Incredible Artistry and Detail Released …
Marines know since the release of the movie 300 that there has always been a relationship to the warrior ethos of Sparta and the US Marine Corps. How many copies of the movie 300 were taken on deployment over the years while US Marines went to Iraq and Afghanistan? Too many to count. The numbers are incredible and so is the relationship between warriors of different battles and period of time
03-20-2017 | Fashion, Lifestyle, Trends
Vision Strike Wear
USMC F-18 Multi Role Fighter Shirt Blazes Off the Design Desk Today and Into the …
The F-18 multi role fighter jet in the USMC arsenal is as bad ass as it gets and when it comes to a shirt displaying this fine bird it has to be. The air wingers through contacted VSW through its Facebook page and requested a design be made showing the awesome capabilities of this USMC fighter. The F18 is easily identified as one of the most lethal aircraft in the USMC
03-20-2017 | Fashion, Lifestyle, Trends
Vision Strike Wear
USMC Tun Tavern Alumni Bottle Opener Coin Debuts Today At Vision-Strike-Wear
When a bottle opener and coin are created for our beloved US Marine Corps it has to be good. There are no exceptions and no second place ribbons. It has to be good not only to snap the top of any drink you care to put in front of it but it has to have lasting design, detail and original art or the US Marines wouldn’t have anything to do with
03-01-2017 | Logistics & Transport
SMi Group
USMC, Royal Navy and Italian Naval Aviation talk Maritime Helicopter Optimisatio …
SMi Group is delighted to announce that USMC, Royal Navy and Italian Naval Aviation will speak on Maritime Helicopter Optimisation at Future Helicopter Technology, taking place in Rome on 18th and 19th May 2017. The two day event will focus on the complexity of managing a varied helicopter fleet with strategies to upgrade, modernise and improve rotary platforms for modern day warfare and operations. Key items that will be covered: • International updates
Comments about openPR
OpenPR is clearly structured and remains true to its principle of confining itself to the essential parts. OpenPR has proven to be a very good and reliable partner to our media agency: Within the shortest time the releases are online and go down well with the media representatives. The success of OpenPR is reflected in the steadily increasing number of press releases. It is good that OpenPR exists!
Ursula Koslik, Director Marketing & PR, F+W Hamburg