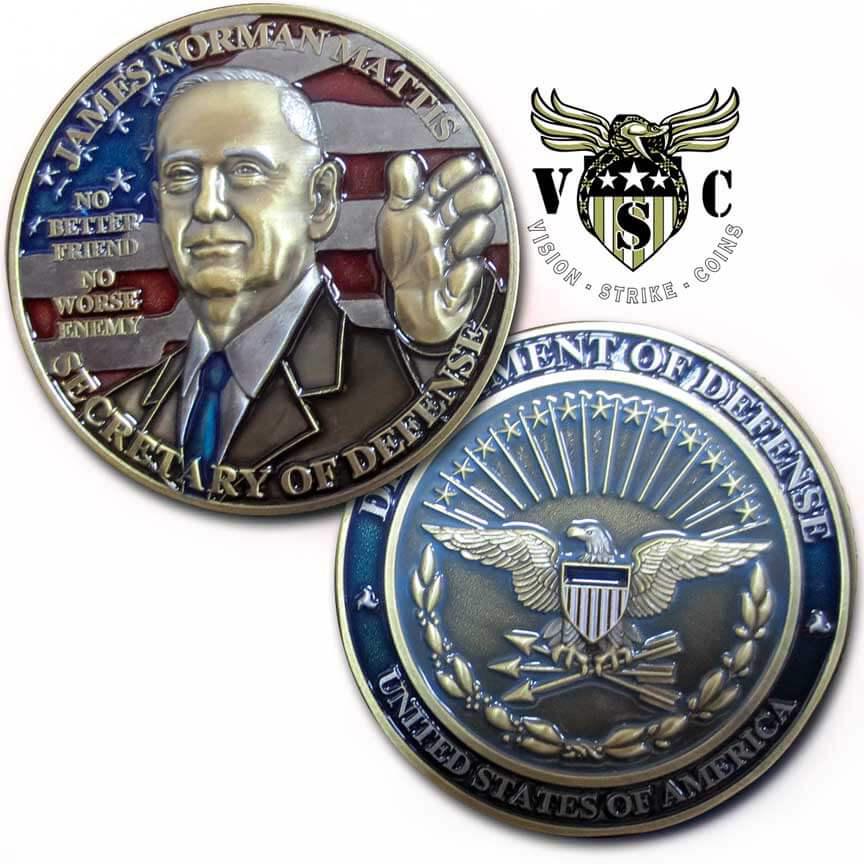 There are several cabinet positions that every newly elected POTUS must fill. The question has always been which one is the highest priority? That is a personal opinion to each its own. However, the strength of the United States has always been its military force.When newly elected POTUS, Donald J. Trump began to fill his cabinet, he immediately looked to General James Mattis to become the 26th United States Secretary of Defense. The General has a very prestigious background with his service in the Marines. Not only is his service prestigious, but it is highly decorated. Vision Strike Coins has designed the Secretary of Defense James Mattis Coin to honor the General’s service in the USMC and his dedication to protect the U.S. by any means necessary. This coin will be a great addition to any collection and can also serve as a milestone in the history of U.S. cabinet appointees.Found at: https://vision-strike-coins.com/product/military-challenge-coins/secretary-defense-general-james-mattis-coin/Vision Strike Coins forges the highest quality coins designed in America! We take pride and are inspired to produce the finest coins for America's very best and we do this because of the hard work, dedication and sacrifice of our active duty military, retirees, US Veterans and prior service. It is an honor to serve you.Vision Strike Coins 4802 SW Scholls-Ferry Rd Ste C Portland, OR 97225

07-12-2018 | Business, Economy, Finances, B …
Forte Coin (FOTC)
New cryptocurrency - FORTE COIN (FOTC)
FORTE COIN (FOTC) is a Cryptocurrency that is blockchain and ethereum based. It can be exchange with other Cryptocurrencies like bitcoin and other currencies when it gets to the exchange market. Apart from using the coin to buy and sell, it can also be used for payment of services such as real estate companies, clearing and forwarding agents, payment of rental and many more. FORTE COIN (FOTC) is also a travellers
10-27-2017 | Fashion, Lifestyle, Trends
Born Ready Apparel
Operation Iraqi Freedom challenge coin
Born Ready Apparel is honored to present our first Operation Iraqi Freedom challenge coin. This is an original and veteran designed Operation Iraqi Freedom coin double-sided and hand painted coin All coins are serialized to show their unique nature. One side displays a deep 3D crafted design honoring the OIF campaign. The beautiful hand-painted Iraq Campaign Medal lies at the heart of the coin. The coin itself takes the shape
03-22-2017 | Business, Economy, Finances, B …
Bitconnect.co
BITCONNECT COIN LAUNCHES NEW ANDROID MOBILE APP
One of the newest and hottest digital currencies on the market certainly needs to travel on the largest digital communication networks, so today Bitcoinnect Coin (BCC) announces the launch of their mobile Android app. This is the beginning of many user-friendly mobile features for BitConnect Coin owners, as an exciting cache of new BCC user features is coming to market in 2017. According to digital currency industry rating authority CoinMarketCap, BitConnect
11-28-2016 | Fashion, Lifestyle, Trends
Vision Strike Wear
US Navy Corpsman Tribal Coin Released
Once again a highly detailed and exquisite coin has been released for coin collectors and United States Navy Corpsman. The detailed and highly sought after coins designed and crafted by Vision-Strike-wear.Com has come another amazing coin to be added to your coin collection arsenal: The US Navy Corpsman Tribal Coin. Detailed and bearing the original art of Frost Call, the lead designer of Vision-Strike-Wear.Com and its next level coin and apparel
11-25-2016 | Business, Economy, Finances, B …
Research Beam
Digital Coin Global Market Outlook 2016 - 2020
A Digital Coin is a form of electronic currency that uses cryptography to check the veracity of users that attempt to spend the currencies. Such currencies can be used to ensure the stability of national economies, corporations, and individual users. The cryptocurrency can be converted to any real currency, including dollars, euro, yuan, and rubble. Online transaction using Digital Coins is one of the fastest ways of sending or receiving
01-26-2012 | Business, Economy, Finances, B …
Alternative Asset Analysis
AAA welcomes New Rare Coin Fund
A new alternative investment fund, which focuses on rare coins, has been welcomed by AAA. Boston, MA, USA, January 24, 2012 -- A new alternative investment fund, which focuses on rare coins, has been welcomed by Alternative Asset Analysis, an alternative investment advocacy group. The fund is being launched by several rare coin enthusiasts, together with a wall street fund manager, who together have formed Certified Assets Management International (CAMI) in order
Comments about openPR
We publish our press releases on openPR.de because we like people who are "open" - just like us.
Frank Obels, CEO, INCONET - Informationssysteme, Communication und Netzwerkberatung GmbH