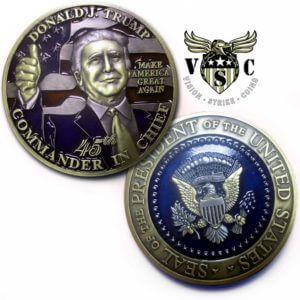 Donald J. Trump was sworn in on Friday January 20, 2017 in Washington D.C. He will take over for then President Barack Obama and his administration. The last two years were very eventful because trump was so ruthless on the campaign trail. However, he still managed to gain momentum through it all, and is now the 45th President of The United States of America. What does this mean for law enforcement? Allow me to break it down.President Obama’s last few years in office saw a lot of tension between law enforcement officials and civilians. A lot of “racial prejudice and profiling” is what the media intended to feed the country. These stories caused a lot of conflict for law enforcement nationwide, making a difficult job even more difficult. However, President Trump is pro-police and promises more equality for every individual serving in blue. The Thin Blue Line is a symbol of service and sacrifice. Those who wear the uniform live to protect and serve their communities, and they should be treated as such.Vision Strike Coins has released a limited edition Trump coin. The “President Trump Coin” was designed to symbolize the legacy of the 45th President and highlight many of his accomplishments to come. Allow this coin to be the beginning of a very optimistic but uncertain presidency. Found At: https://vision-strike-coins.com/product/military-challenge-coins/donald-j-trump-commander-in-chief-coin/Vision Strike Coins forges the highest quality coins designed in America! We take pride and are inspired to produce the finest coins for America's very best and we do this because of the hard work, dedication and sacrifice of our active duty military, retirees, US Veterans and prior service. It is an honor to serve you.Vision Strike Coins 4802 SW Scholls-Ferry Rd Ste C Portland, OR 97225

01-25-2019 | Science & Education
Hope International University
HIU President Announces Retirement
After 50 years in vocational ministry, including 45 years in higher education and the last 15 years of service as President of Hope International University, Dr. John L. Derry has announced his retirement, effective August 15, 2019. President Derry notified the HIU community in early December, stating that the timing is now right, both for the University and for his family. “Over the past several months, Jane and I
04-04-2016 | Industry, Real Estate & Constr …
F.E. Moran Fire Protection Northern Illinois
F.E. Moran Fire Protection, Northern Illinois Proud to Announce New President an …
Northbrook, IL – F.E. Moran Fire Protection is pleased to announce that John Hebert will be taking on the role of the President of F.E. Moran Fire Protection, Northern Illinois (FPN). Mr. Herbert has been a key player in FPN’s growth and success over the past nine years. His knowledge and experience in the fire protection industry has helped propel FPN to one of the top fire protection
05-29-2012 | Science & Education
AVP Communications
Harrisburg University President Leaving, Dr. Eric Darr Appointed Interim Preside …
After a decade as President and CEO of Harrisburg University of Science and Technology, Dr. Mel Schiavelli announced today that he is leaving the university he helped to establish to become executive vice president for academic and student services at Northern Virginia Community College effective July 1, 2012. Harrisburg, PA, May 24, 2012 - After a decade as President and CEO of Harrisburg University of Science and Technology, Dr.
03-20-2012 | Leisure, Entertainment, Miscel …
Camp Pa-Qua-Tuck
Camp Pa-Qua-Tuck Names Muriel Corcoran as Board President, Kevin Spellman as Vic …
(Center Moriches, NY) — Camp Pa-Qua-Tuck has announced that Muriel Corcoran has been named Board President and Kevin Spellman as its Vice President. Ms. Corcoran has been on the camp’s Board of Directors since 1995 and previously served as its Secretary for the past eight years. She replaces Tom Chieffo, who was Board President for the past nine years and will continue to remain on the board. A resident of East Moriches,
05-30-2007 | IT, New Media & Software
Solix Technologies
Solix Technologies Names New Vice President of Sales, Vice President of Strategi …
SUNNYVALE, Calif., May 29, 2007 – Solix Technologies, a leading provider of enterprise data management solutions for compliance and information lifecycle management, today announced three seasoned executives have joined the Solix executive management team from EMC Corporation, a private consulting firm for the storage industry and SAP. Craig Bradley, vice president of sales, joins Solix from EMC and is responsible for driving business development and revenue through
05-24-2007 | Advertising, Media Consulting, …
Community Strategies
Michael Gibson and Christina Kendall Gibson appointed as president and vice pres …
Prior to be appointed as the heads of Community Strategies, Mr. and Mrs. Michael Gibson was Executive Vice President of Operations, at the Direct Impact Company where they were employed for ten years. In this role, the Gibsons spearheaded the successful application of the company\'s capabilities in direct education, public relations, advertising, grassroots media and marketing and other promotional campaigns. directly oversaw and implemented Direct Impact\'s most effective integrated grassroots
Comments about openPR
Your portal is fast, simple, and easy to use. Others may have more functions but they also demand more editing time, you have to preformat the text in order to achieve a good result etc. I think openPR is really fantastic!
Andreas Knepper, wallmedien AG