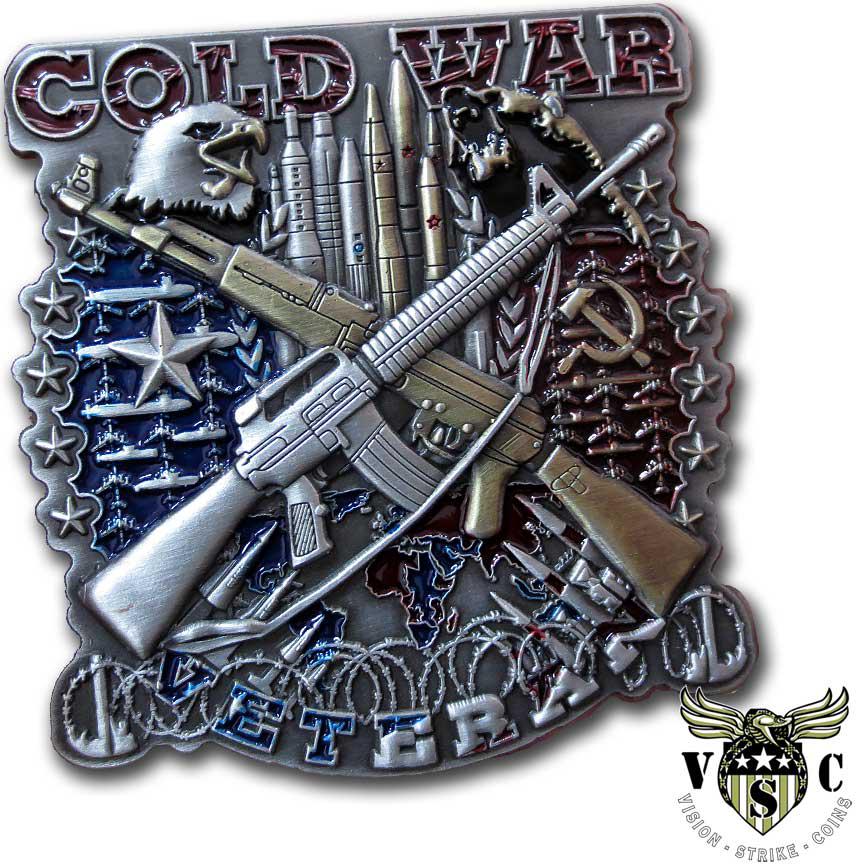 What was the Cold War? That is a question we hear quite often. Some might mistake it for a bloody battle, while others may assume it was a war fought in a cold climate. Well I am here to tell you there is no right or wrong answer. Vision Strike Coins is here to breakdown the history of this historic ere, and to honor its veterans with the Cold War Veteran Coin.The Cold War was a geographic tension between political powers based around the Soviet Union after World War II. President Harry S. Truman signed the Truman Doctrine into effect in 1947 that provided aid to all nations threatened by Soviet expansion. This act of U.S. Foreign Policy allowed an ease of calmness to those nations, but what was the United States’ main role in all of this? It’s simple nuclear presence.From 1945-1992 the United States conducted over 1,000 nuclear tests. These tests were considered a threat to any nation that threatened its allies, and let them know you will be dealt with via force. The Soviet Union chose not to be nuclear minded during this time, so instead they countered with a space race. In 1957, the Soviet Union launched the first ever artificial satellite into a low earth orbit. Now you may be thinking, we went from war to space. Well that’s exactly what the Cold War entailed. There were several phases that took place over those decades. From the Space Race to the Vietnam War, it was all about which nation can truly rise above all else and be considered the main power after World War II. The North Atlantic Treaty Organization (NATO) was established in 1949, two years after World War II to form a military alliance between North America and Europe. This organization would soon be put to work through several phases including the Korean War, Bay of Pigs Invasion, Vietnam War, and more.With all of the events that took place during the Cold War, it was only right to honor the veterans who served. The Cold War Veteran Coin does just that. This new coin by Vision Strike Coins displays true American pride with the Bald Eagle gracing the cover, and American Flag accents throughout its face. The coin is truly original and will make a great gift or collectible for anyone.Found At: https://vision-strike-coins.com/product/military-challenge-coins/cold-war-veteran-coin/Vision Strike Coins forges the highest quality coins designed in America! We take pride and are inspired to produce the finest coins for America's very best and we do this because of the hard work, dedication and sacrifice of our active duty military, retirees, US Veterans and prior service. It is an honor to serve you.Vision Strike Coins 4802 SW Scholls-Ferry Rd Ste C Portland, OR 97225

07-02-2019 | Fashion, Lifestyle, Trends
Defender Door Locks
Uk Pensioner Declares War On Burglars
A PENSIONER has used his life savings to create a New Security Device after reliving childhood horrors of a terrifying break-in at home more than half a century ago. Gordon Forrester recalled how as a 10-year-old he protected his Mother as someone broke down their front door and abused his mother. It is known as the " Defender Door Lock " and is mostly Solid Steel and weighs a robust 6.9
11-02-2018 | Fashion, Lifestyle, Trends
War Paint
War Paint Makeup For Men Launches
Start-up brand War Paint is due to re-launch its new range of makeup designed specifically for men. The brand offers a range of 4 core products; Foundation, Concealer, Bronzer, and Tinted Moisturiser, their products are available in 5 shades ranging from Fair to Dark. With the growth in makeup for men in recent years and the increasing demand for cosmetic and skincare products. War Paint despite being less than a year
10-18-2016 | Science & Education
FWF - Austrian Science Fund
Development policy during the Cold War
In a project supported by the Austrian Science Fund FWF, historians from the University of Vienna explored the everyday life of development-aid staff at the time of the East-West confrontation, thereby making an essential contribution to the global history of development policy. About 30 East German (GDR) engineers, 200 Cuban mechanics and 4000 local workers were involved in building the Mugher cement factory in Ethiopia. Constructed in 1980 and largely
04-10-2013 | IT, New Media & Software
GameArt Studio GmbH
Big ticket promotion in browser games Holy War, Glory Wars, Tagoria and A.I. War
Berlin based online games developer GameArt Studio is providing its players a special Easter ticket promotion. Redeeming a premium ticket will grant great extra bonuses in all four games. Only a few days after the last successful world merges in Tagoria more good news are waiting for the fans of GameArt Studio's browser games. Today started the big Easter ticket promotion at GameArt Studio. It will run until 4.4.2013 and offers hot
09-11-2012 | Arts & Culture
Mira Sound Germany
Talking World War & The Nato Gang - Michel Montecrossa's Single release apropos …
‘Talking World War & The Nato Gang‘ is Michel Montecrossa’s New-Topical-Song-Movement Audio Single and DVD, released by Mira Sound Germany, apropos Romney, Obama, Netanyahu, Assad and the entire World War circus. The people of the world again shall be fooled into wars for boosting war business. The politos again serve the bankas and don’t care for the millions who will bleed. One day there will be the time for young
07-30-2012 | IT, New Media & Software
GameArt Studio GmbH
Super Summer Ticket Promotion in Holy War, Glory Wars, Tagoria and A.I. War
Today, Berlin-based web game developer GameArt Studio has fired the starting pistol for the traditional Summer Ticket Promotion. During the running time of the Summer Ticket Promotion, players will be rewarded with extra bonuses when they cash in their tickets in Holy War, the fantasy RPGs Glory Wars and Tagoria, and last but not least the science-fiction web game A.I. War. As of today, every ticket redeemed for Premium status
Comments about openPR
We publish our press releases on openPR.de because we like people who are "open" - just like us.
Frank Obels, CEO, INCONET - Informationssysteme, Communication und Netzwerkberatung GmbH