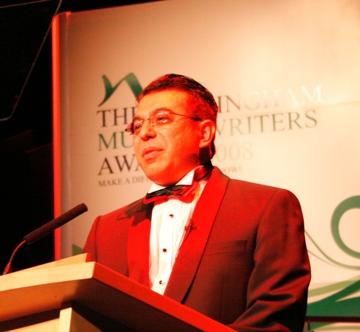 “This is not the second coming of the Satanic Verses!” author asserts.Dr. Max Malik, a former recipient of the Muslim Writer of the Year Award, has expressed his anger and deep dismay following the censorship of his debut novel “The Butterfly Hunter”. The Muslims Writers Awards, which claims to be a non-religious initiative, chose not to submit the controversial novel to the project’s independent judging panel for this year’s awards.Dr. Malik was winner of the top prize in 2007, and was spurred on by his success to dedicate a year of his life to “The Butterfly Hunter” – an explosive work of fiction which frankly explores the “Clash of Civilisations” expounded by Islamic extremists and NeoCons alike. The book also covers controversial issues facing Britain’s Muslim community today – including suicide bombing, drug abuse, paedophilia and sexual assault.The unpublished novel was submitted for review to the Muslim Writers Awards 2008. However, despite the book being shortlisted, the organisers of the initiative did not forward Max’s work to the independent panel of judges – which included respected authors and publishers.Dr. Malik explains: “I’d received very positive feedback from organisers of the MWA and, being a previous winner, was advised I was hot favourite to win for a second year running. However, when I asked the judges for feedback on my novel they told me that it had not been included in the submissions they were asked to judge. It was only then that I realised my work was being censored by the Muslims Writers Awards project.”“I’m angry at the treatment I’ve received,” stated Dr. Malik “because my creative effort is being treated as if it’s somehow unclean and unworthy. Clearly, the Muslim Writers Awards has decided that the novel is so unpalatable for them that it needs to be buried.”“I’m deeply dismayed that a project like this, which is supposed to unearth new talent and celebrate artistic expression, has been hijacked by the puritan mindset. Yes it’s true that not all the Muslim characters in my book are model citizens. However, this is just a reflection of the realities we face today.” added the author.“It’s unseemly that my novel is being treated as if it’s the second coming of The Satanic Verses. I have created a work of fiction, which is neither blasphemous nor disrespectful towards any particular group or individual.”About Max MalikDr. Malik is a former GP, who hails from Birmingham. He received the (supposedly) prestigious Muslim Writer of the Year Award in 2007. Less than a year later, he completed his debut novel “The Butterfly Hunter”.Max has professional experience of working with serving members of the armed forces, and on the day of September the 11th 2001 he found himself in lockdown at RAF Stafford – where he was assigned as a locum Physician.Further information about Dr. Max Malik’s debut work is available at www.thebutterflyhunter.net. Issued on behalf of Dr. Max Malik, by Ballencrieff House, London WC1N 3XX For further information, please contact Junaid Bhatti on +44 (0) 7980 586 243 or +44 (0) 20 7193 5766. Email: junaid@ballencrieff.netJunaid Bhatti Director Ballencrieff House London WC1N 3XX +44 7980 586 243 +44 20 7193 5766Dr. Max Malik is a UK-based author and former GP

06-08-2009 | Science & Education
Junaid Bhatti
Arab Invasion at American Publishing Event
For the first time in its history, America’s biggest publishing event has dedicated its efforts to promoting Arab literature. Book Expo America (BEA) 2009, held this week in New York, featured more than 600 representatives from the Muslim world, and also introduced more than 300 Arab-language children’s books to the North American market. “This is the first time that BEA brings such a large regional focus to its attendees, and we
01-05-2009 | Business, Economy, Finances, B …
Junaid Bhatti
Islamic finance still active as the credit crunch deepens
The last month has seen a further deterioration in the UK economy, with a deepening recession, banking bail-outs and big-name retailers going bust. However, one sector of the market still active is Islamic Finance which is now both cheaper and more accessible. Most recently, alburaq, the UK’s most innovative Islamic “mortgage” provider, has responded to interest-rate cuts by improving its range of Shari'ah-compliant Home Purchase Plans. “Our new product range means
12-03-2008 | Politics, Law & Society
Junaid Bhatti
Campaigners welcome new Forced Marriage legislation
The introduction of new legislation to protect victims of forced marriages has been welcomed by charities campaigning to eradicate the practice. Under the new laws individuals and the Police can apply for a Forced Marriage Protection Order which prevents families from seizing passports or intimidating victims into travelling abroad. In addition, the Order could force families to reveal a missing victim’s whereabouts to Police. Kelly Kaur, who runs the Throughcare Housing
10-13-2008 | Politics, Law & Society
Junaid Bhatti
Muslim Lord Mayor honours British Military
The Lord Mayor of Birmingham, Councillor Abdul Rashid, has recently been active in honouring British servicemen and women. In the last month he has overseen the city’s largest ever enlistment ceremony, inspected the troops at a military parade and taken charge of HMS Daring – the Royal Navy’s fastest and most powerful vessel! At the beginning of September, the Lord Mayor was present as 47 Midlands teenagers swore allegiance to Queen

12-23-2020 | Business, Economy, Finances, B …
DarussalamStore
Golden Stories of Sayyidah Khadijah (RA)-A bestselling biography on the mother o …
Title: Golden Stories of Sayyidah Khadijah (RA)-A bestselling biography on the mother of the believers Golden Stories of Sayyidah Khadijah (RA) is a marvelous piece of writing on the life of Sayyidah Khadijah (RA) by the prominent Islamic scholar and author “Abdul Malik Mujahid”. The book was originally published in 2012 and on account of its immense popularity has been republished several times. The book has also been released in the
12-10-2020 | Business, Economy, Finances, B …
TMA Worldwide
Post Brexit UK can tap the $5 trillion global halal consumer market to become th …
Request Immediate Publication Headline: Post Brexit UK can tap the $5 trillion global halal consumer market to become the global hub & gateway to Ethical & Shariah Finance: Indian American Dr. Tausif Malik “Post-COVID -19, the startups can give a great fillip to the UK economy and UK can be hub for Islamic Fintech, Halal food manufacturing, Halal cosmetics, and, Modest fashion” “Halal Angels Network has partnered with two UK organisations - Educational
10-12-2018 | Sports
Up Market Research (UMR)
Latest Report On Field Hockey Equipments Market Analysis 2018 – Adidas, Grays, …
UpMarketResearch published an exclusive report on “Field Hockey Equipments” delivering key insights and providing a competitive advantage to clients through a detailed report. The report contains 112 pages which highly exhibits on current market analysis scenario, upcoming as well as future opportunities, revenue growth, pricing and profitability. This report focuses on the Field Hockey Equipments market, especially in North America, Europe and Asia-Pacific, South America, Middle East and Africa. This
09-11-2018 | IT, New Media & Software
Canvass Analytics
Canvass Analytics to feature at Milken Institute Asia Summit
September 11, 2018, TORONTO: Canvass Analytics, a provider of AI-enabled predictive analytics for the Industrial Companies, is pleased to announce that its CEO, Humera Malik will present at the Milken Institute’s Asia Summit, being held on 12-14 September in Singapore. As part of the “Artificial Intelligence, Real Impact” discussion, on Thursday 13 September from 2:30pm-3:30pm, Ms Malik will provide her insights on the impact of artificial intelligence on economic growth
07-06-2017 | Science & Education
Chanakya IAS Academy
Chanakya IAS Academy organizes Art of Success Seminar at Ahmedabad by Anuj Malik …
Chanakya IAS Academy, Ahmedabad branch, is going to organize a seminar at 301, Sachet 3, Mirambika School Road, Naranpura. The seminar will commence at 11am and finish at 1pm on 8th July 2017. The students will be addressed by the highest scorer in GS Mains, Anuj Malik (Rank 16, CSE 2016). Anuj Malik will share her success story and will discuss the ways to enhance writing skills for Civil Services
06-06-2017 | Health & Medicine
ClickOnCare.com
Akshat Malik of ClickOnCare.com is recognized as an 2017 Owler Top Rated CEO in …
Community-based business insights platform distributes 1,000 awards among 167,000 CEOs, awarding the top 0.60 percent of CEOs. Bangalore, Karnataka – 31/05/2017– ClickOnCare.com is excited to announce its CEO Akshat Malik was awarded an 2017 Owler Top Rated CEO award in E-commerce Industry. The Online Market Leader in Cosmeceuticals, Dermacare & Nutrition Products in OTC Healthcare. For the first time, Owler is honoring the top rated CEOs on their platform. CEOs are rated
Comments about openPR
9 o'clock: discuss press release with client, 10 o'clock: submit release to openPR, within the briefest possible time release is published and displayed in a prominent place on openPR.de. I am thrilled!
Zehra Spindler, Calypso Now! - Communication Agency