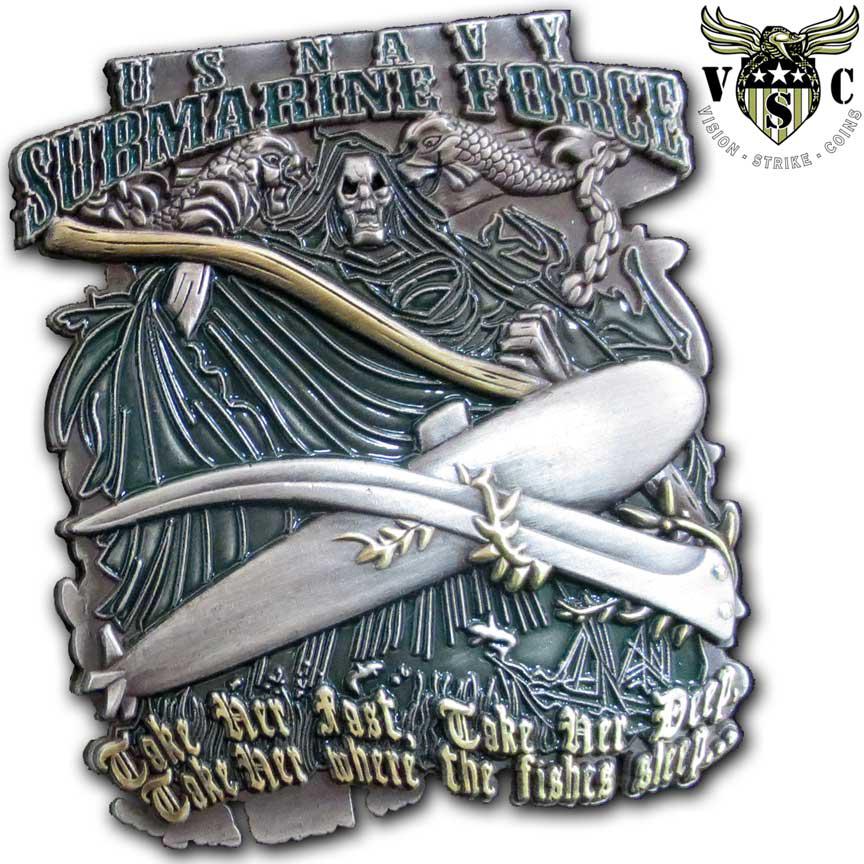 Vision Strike Coins presents the US Navy Submarine Force Grim Reaper Coin. It is no secret that the United States remains safe due to the Naval Forces that patrol the seas. The US Navy plays a pivotal role in national security, and it’s only right to honor them with a challenge coin.The Grim Reaper is known for taking lives. If you mess with the United States, we will come after you. Our forces at sea have a weapon arsenal that is out of this world. So out of this world that one wrong move will take you out. However, we don’t promote or encourage violence. This coin stands as a representation for how lethal the US Navy can be when force is applied. Submarines patrol the depths of the ocean. There are miles and miles of sea level to tread. These depths allow threats to form from all angles. It is best to be prepared and our submarine forces will detect anything out of the ordinary no matter how big the threat.The US Navy Submarine Force Grim Reaper Coin is truly the deadliest force at sea. VSC has intrigued the design of the grim reaper in an antique gold and silver colorway. In addition, there reads a quote at the bottom, “Take her fast, take her deep, take her where the fishes sleep.” This quote definitely tells you that if you get on the US Navy’s bad side, they will take you down to the depths where you will never be seen again.Found at: https://vision-strike-coins.com/product/military-challenge-coins/us-navy-submarine-force-grim-reaper-coin/Vision Strike Coins forges the highest quality coins designed in America! We take pride and are inspired to produce the finest coins for America's very best and we do this because of the hard work, dedication and sacrifice of our active duty military, retirees, US Veterans and prior service. It is an honor to serve you.Vision Strike Coins 4802 SW Scholls-Ferry Rd Ste C Portland, OR 97225

03-12-2020 | Business, Economy, Finances, B …
MarketsandMarkets
Increasing Demand of UUV's From Navy Applications
"AUV market is expected to grow at higher CAGR during the forecast period." Based on type, the unmanned underwater vehicle market has been segmented into Remotely Operated Vehicle (ROV) and Autonomous Underwater Vehicle (AUV). The growth of the market can be attributed to the rising number of deep-water offshore oil & gas production activities and increasing maritime security threats. For AUV the growth mainly attributed to the increasing usage of AUVs
07-03-2019 | Associations & Organizations
SMi Group
Royal Canadian Navy, NATO STO – CMRE & Portuguese Navy to Discuss Data Exploit …
SMi Group Reports: Senior military officials will be addressing a key theme on data exploitation at the Maritime Information Warfare conference this November A key theme to be discussed at the 3rd Annual Maritime Information conference, taking place on the 18th-19th November 2019, is ‘Information as an Enabler: Data exploitation’. This will be addressed by three senior military officials from the Royal Canadian Navy, NATO STO – CRME (Centre for Maritime
11-27-2018 | Business, Economy, Finances, B …
Insurance Navy
Insurance Navy Offers $50 Roadside Assistance
FOR IMMEDIATE RELEASE Contact: Anel Herrera Aherrera@insurancenavy.com Insurance Navy Offers $50 Roadside Assistance Palos Hills, Illinois- November 27, 2018- Insurance Navy is offering roadside assistance for $50 per six-month term. With roadside assistance, drivers are able to drive confidently and travel stress-free. Roadside assistance is a service Insurance Navy offers that is added onto an existing insurance policy. It provides assistance if a vehicle has mechanical problems while on the road. Roadside assistance
07-24-2018 | Associations & Organizations
SMi Group
Royal Navy, US Navy, DSA, Swedish Armed Forces, Royal Australian Navy, US Marine …
The Defence Safety Conference http://www.defencesafety.com/openpr, taking place at the Copthorne Tara Hotel, Kensington, London on the 1st and 2nd October 2018, will feature high level briefings from senior leaders on maritime safety. Conference organisers SMi Group are delighted to announce that the following speakers will all share their organisations priorities, challenges and solutions when it comes to enhancing maritime safety for the future: • Vice Admiral Ben Key, Fleet Commander, Royal Navy • Rear Admiral
03-20-2017 | Fashion, Lifestyle, Trends
Vision Strike Wear
US Navy Chiefs at SLF Norfolk Receive Their Navy Dolphin Shirts
When the Navy Chiefs at SLF Norfolk wanted the best in shirts for their Sailors they turned to Vision-Strike-Wear.Com The US Navy surface fleet like its big boys need constant protection from threats above and below the surface. The Mater Chiefs, Senior Chiefs and Chiefs of the United States Navy know this. When they searched the web they found a company whose primary focus was custom US Navy design and illustration.
11-29-2016 | Fashion, Lifestyle, Trends
Vision Strike Wear
US Navy Corpsman Tribal Coin Released
Once again a highly detailed and exquisite coin has been released for coin collectors and United States Navy Corpsman! The detailed and highly sought after coins designed and crafted by Vision-Strike-wear.Com has come another amazing coin to be added to your coin collection arsenal: The US Navy Corpsman Tribal Coin. Detailed and bearing the original art of Frost Call, the lead designer of Vision-Strike-Wear.Com and its next level coin and apparel
Comments about openPR
OpenPR ist the nicest and most clearly laid out PR platform I have seen to this day. The press releases are displayed very nicely and clearly and without any unnecessary frills. The updates are fast and the finished release looks appealing and is clearly legible. Even with 16 years of experience one discovers new things from time to time. Congratulations!
Gabriele Ketterl, Director Marketing & PR, Menads