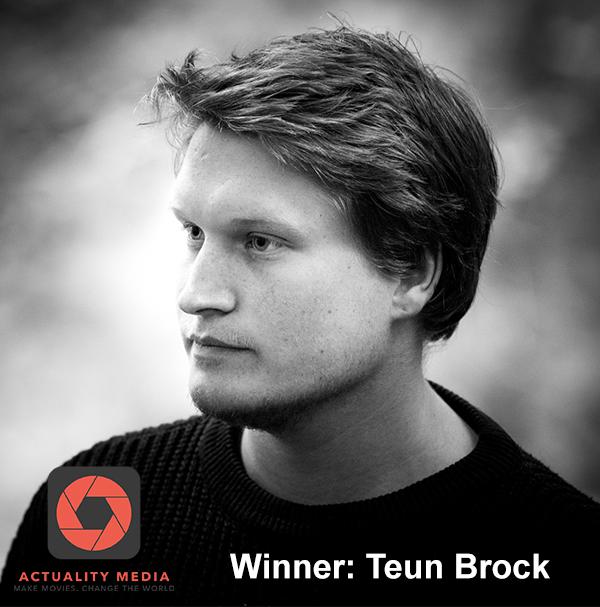 Teun Brock has been announced winner of Actuality Media’s Changemaker in Your Community Documentary Competition. Mr Brock’s film Burgers: The Living Room won him a 100% scholarship valid for a 2017 Documentary Outreach with the study abroad organization. Actuality Media’s program director Robin Canfield said whilst the competition was fierce, Mr Brock’s film had him “hooked from the very beginning”. “The setting is different from anything I'm familiar with yet the way it was captured pulled me in immediately with a feel of familiarity - I knew I'd be welcome if I stepped in the door, which is just what Burgers intends,” Mr Canfield said. “More than other submissions, we weren't just told what was happening, but we got to follow along with the character through parts of his daily life and experience his work with him. “We are thrilled that Teun will be joining Actuality Media’s Nicaragua Documentary Outreach as Director in June.” Mr Brock, who is from The Netherlands and studies cinematography at the Royal Institute for Theatre, Cinema and Sound (RITCS) in Brussels, said he was inspired by Burgers’ inclusive socio-cultural space. The former squat in Eindhoven was bought out in the ‘80s by its residents and developed into a thriving social collective. A network of volunteers now run the collective’s small biological grocery store, restaurant and art space which hosts film screenings, expositions and workshops. “Burgers’ solidarity is very inspiring to me. It shows us that money does not have to be the main driving force in life,” he said. “We all live together in this world, so it’s nice to see people who not only realize this, but act on it.” Mr Brock said he was flattered his documentary was appreciated and felt privileged to join Actuality Media’s program in Nicaragua in July. “Travelling to a new continent with an international team of excited and adventurous filmmakers to discover inspiring stories sounds like a dream come true!” View the winning documentary here: http://www.actualitymedia.org/documentary-competition-winner-teun-brock/ABOUT ACTUALITY MEDIA Founded in 2011 by Robin and Aubrie Canfield, Actuality Media is a service-learning production organisation coordinating programs for media students and emerging filmmakers to connect with changemakers around the world to tell stories that matter. Actuality Media’s programs provide a unique platform to produce short documentaries that showcase individuals and organizations who are making a sustainable impact on chronic social and environmental problems in grassroots innovative ways. To date, Actuality Media’s programs have produced 82 documentaries and micro-documentaries in Guatemala, Nicaragua, Costa Rica, Ecuador, Bolivia, Tanzania, Uganda, Kenya, Thailand, Cambodia, Malaysia, Turkey, Morocco and Colombia across a range of categories, from the environment and human rights to social justice.MEDIA CONTACT Stephanie Capper Media & Marketing Director 2014 Edgewater Drive Suite 240 Orlando, FL 32804 USA Tel: +4915154113276 | +1-503-208-5042 steph@actualitymedia.org http://www.actualitymedia.org/about/

04-09-2019 | Business, Economy, Finances, B …
QY Research, Inc.
Grain Dryer Market Development and Forecast Report 2018| Cimbria, CFCAI Group, B …
Global Grain Dryer Market Report is a professional and depth study on the present state also focuses on the major drivers, business strategists and effective growth for the key players. It provides accurate market figures and forecasts that have been calculated with the use of advanced primary and secondary research techniques. It includes deep segmental analysis of the global Grain Dryer market where the main focus is on segments by
09-15-2017 | IT, New Media & Software
Spire Market Research
Distributed Control Systems (DCS) Market Forecast 2017-2022 Beckhoff Automation, …
Distributed Control Systems (DCS) Market Research 2017 A market study ” Global Distributed Control Systems (DCS) Market ” examines the performance of the Distributed Control Systems (DCS) market 2017. It encloses an in-depth Research of the Distributed Control Systems (DCS) market state and the competitive landscape globally. This report analyzes the potential of Distributed Control Systems (DCS) market in the present and the future prospects from various angles in detail. The Global
06-15-2017 | Business, Economy, Finances, B …
Market and research
Global Layer Breeding Equipments Market 2017 Big Dutchman, Big Herdsman Machiner …
In this report, the global Layer Breeding Equipments market is valued at USD XX million in 2016 and is expected to reach USD XX million by the end of 2022, growing at a CAGR of XX% between 2016 and 2022. Geographically, this report is segmented into several key Regions, with production, consumption, revenue (million USD), market share and growth rate of Layer Breeding Equipments in these regions, from 2012 to 2022
05-04-2017 | Advertising, Media Consulting, …
Scaffolding Market Research
Scaffolding Market Research 2017 : Pacific scaffold, Devco, KHK, ADTO, Brock Gro …
Scaffolding Market Research 2017 : Pacific scaffold, Devco, KHK, ADTO, Brock Group. A market study based on the " Scaffolding Fitting Market " across the globe, recently added to the repository of Market Research, is titled ‘Global Scaffolding Fitting Market 2017’. The research report analyses the historical as well as present performance of the worldwide Scaffolding Fitting industry, and makes predictions on the future status of Scaffolding Fitting market on
04-21-2017 | Advertising, Media Consulting, …
GlobeMetrix
Global Breeding Equipments Market By Leading Manufacturers: Facco,Chore-Time Bro …
The motive of this strategic research report entitled "Global Layer Breeding Equipments Market 2017" is to provide company officials, industry investors, and industry members with consequential insights to enable them make reliable strategic decisions regarding the opportunities in the global Layer Breeding Equipments market. Key Notes On Layer Breeding Equipments Market: "Global Layer Breeding Equipments Market 2017 "offers crucial insights into the global Layer Breeding Equipments market along with the market size
12-19-2016 | Business, Economy, Finances, B …
Brock CPA
Jacksonville accountant strikes out on his own as Brock CPA
After a decade of working with a large local firm in Jacksonville, Daniel Brock, a third-generation CPA, has decided to strike out on his own and has opened Brock CPA. “Brock CPA is perfectly situated to help individuals and locally owned businesses with all of their accounting needs,” said Daniel Brock. “I want to be known as the CPA with the personal touch; one who will listen to your needs,
Comments about openPR
Your portal is fast, simple, and easy to use. Others may have more functions but they also demand more editing time, you have to preformat the text in order to achieve a good result etc. I think openPR is really fantastic!
Andreas Knepper, wallmedien AG