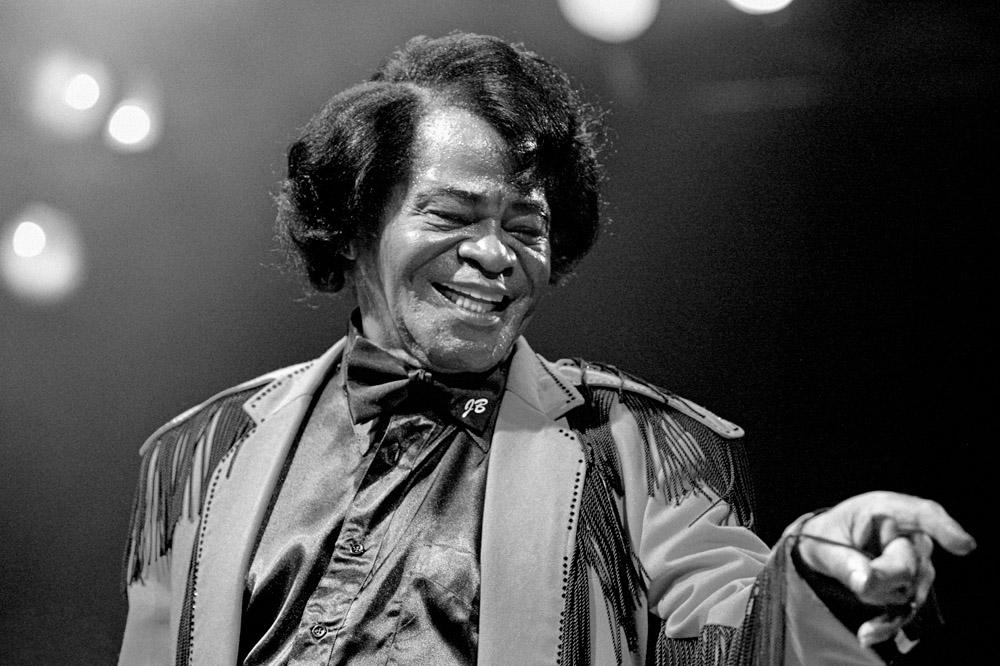 James Brown at the House of Blues by Skip Bolen

NEW ORLEANS, LA. -- The new Skip Bolen Photography website has been officially launched this week. The website features an eclectic mix of both black + white and color photographs primarily of musicians in New Orleans; downtown street scenes of New Orleans, Los Angeles and New York City; rural water towers from Louisiana, Mississippi and Texas; and lastly, stills photography from Fox Television's K-Ville. The new website can be viewed at www.SkipBolen.com The new website contains an impressive portfolio of music portraits: James Brown (commonly referred to as "The Godfather of Soul" and "The Hardest Working Man in Show Business"), the luminous jazz vocalist Jimmy Scott, plus many other musicians including Wayne Shorter, Henry Grimes, Roy Hargrove, Dave Brubeck, Herbie Hancock, Nicholas Payton, David Murray, Marcus Roberts, Terence Blanchard, Irvin Mayfield, Ellis Marsalis, John Legend, Elvis Costello and many more seasoned performers to several new rising sensations such as Jonathan Batiste, Christian Scott and Troy "Trombone Shorty" Andrews bringing down the house at the annual New Orleans Jazz & Heritage Festival. Other works on the new website include an architectural project that captures the romance and nostalgia of vintage signs, landmarks and other points of interest shot in and around New York, Los Angeles, and Bolen's hometown of New Orleans. Images include a black + white photograph of the first Buds Broiler opened in 1952 on City Park Avenue in New Orleans still standing and untouched by Hurricane Katrina that appears the same today as it did 56 years ago -- this photograph was included in Skip Bolen's latest work exhibited in the group photography show at the Stella Jones Gallery in New Orleans last December 2007. Other images on the website include downtown Los Angeles street scenes at night of old theatre marquees, eateries, and a view of Los Angeles' downtown skyline from a top the hills behind the Hollywood Sign; a thrilling view at night of the Brooklyn and Manhattan Bridges with the Manhattan skyline in the distance from the perspective of a sixth-floor artist loft in DUMBO (Down Under the Manhattan Bridge Overpass) in Brooklyn; and the downtown New Orleans Walgreens Drug Store, Lenny's Piccadilly Lounge, The Half Shell, Meyer The Hatter and Mrs. Mae's all photographed in the wee hours of the night. Bolen says, “I much prefer roaming the streets and photographing late at night with only available light as I often think that the night is so much more alive and much more richly colored than the day. Jazz comes alive at night in the clubs, streetlights and neon lights wash everything in a glow and there is often a sense of mystery lurking in the shadows and silhouettes." Rural water towers have always fascinated Skip Bolen, and the new website includes photographs of several rural water towers taken on travels across southern Louisiana, Mississippi and Texas. The freshly painted Lake Village water tower illuminated with spotlights on the banks of Lake Chicot in Louisiana and photographed at night almost looks surreal while his other photographs of older water towers are completely rusted, pitted, graffitied or grown over with vines. When Skip Bolen isn't roaming the streets or spending late nights in jazz clubs searching for images to photograph, he is often found on movie sets working as a stills photographer and the new website features several of his stills photographs from Season 1 of Fox Television's K-Ville based in New Orleans in the wake of post Katrina that featured Anthony Anderson and Cole Hauser as the lead roles. Born outside New Orleans, Skip Bolen has made his home in New Orleans after living in New York City and Los Angeles. His photographs are in several public and private collections, among them the Ogden Museum of Southern Art in New Orleans and most recently, The Louisiana State Museum acquired 22 of his photographs. His work has also been exhibited in many solo and group exhibitions, among them The Stella Jones Gallery, Robert Bruno Gallery and John Stinson Gallery in New Orleans; The Jazz Bakery in Los Angeles, Jazz Day L.A. at the Dorothy Chandler Pavilion, and the Los Angeles Jazz Society's Annual Jazz Tribute & Concert. His photographs have appeared in numerous publications including The New York Times, Rolling Stone, Vogue, New York Post, US Weekly, Elle, VH-1, New York Magazine, Jazz Times Magazine, Downbeat Magazine, Where New Orleans and recently the July 24th 2008 cover of Pasatiempo, the Arts and Culture Magazine of the Santa Fe New Mexican. More information about Skip Bolen and his photography can be found on www.SkipBolenStudio.com or www.myspace.com/skipbolen Skip Bolen Studio P.O. Box 51295 New Orleans, LA 70151-1295 USA Tel: 213.840.9259 E-mail: sbolen@skipbolenstudio.com www.SkipBolenStudio.com www.SkipBolen.com Press Contact: Skip Bolen Skip Bolen is a southern photographer of musicians, architecture, interiors, old signage, lifestyle and the culture of New Orleans and southern United States. He is a member of the IATSE Union 600 (International Cinematographers Guild, Jazz Journalists Association, NPPA, and Advertising Photographers of America. Skip Bolen is represented internationally by Getty Images and WireImage.com, and by Stella Jones Gallery in New Orleans.

09-30-2010 | Arts & Culture
Skip Bolen
Jazz legend Dave Brubeck makes a rare appearance at the Ogden Museum of Southern …
New Orleans photographer Skip Bolen donates a larger than life 40x60 inch black and white photograph of Dave Brubeck on stage performing at the New Orleans Jazz and Heritage Festival in 1999 to the Ogden Museum of Southern Art for its annual gala and auction, O What A Night, on Saturday, October 9th, 2010.  The evening promises to be quite the event of the Arts Season in New Orleans with

03-20-2019 | Politics, Law & Society
Cueria Law Firm, LLC
Cueria Law Expands Personal Injury Focus in New Orleans
Tulsa, OK - March 20, 2019 - A Louisiana law firm with 25-years experience is stepping up its coverage of personal injury claims across New Orleans. Cueria Law Firm, run by Brent Cueria, is a personal injury law firm that represents individuals who have been injured through the negligence of others and handles cases across the state. He has represented dozens of residents who have been unfortunate to have fallen accidents throughout
12-19-2018 | Leisure, Entertainment, Miscel …
Wizard World
'Aquaman' Star Jason Momoa Added To Wizard World New Orleans
Jason Momoa, who rocketed to superstardom in Justice League (2017) and Aquaman (in theaters now), will attend Wizard World New Orleans on Friday and Saturday, January 4-5, at the Ernest N. Morial Convention Center. Momoa will greet fans, sign autographs and pose for photo ops. Momoa had significant roles in the popular series "Baywatch" and "Stargate: Atlantas" before a turn as "Khal Drago" on the acclaimed "Game of Thrones" was followed
06-09-2017 | Health & Medicine
Allied Academies
ENT 2017_Conference_New Orleans, USA
On behalf of Allied Academies, it is our pleasure to invite you all to the “5th American Otolaryngology - ENT Surgery Conference” during November 09-10, 2017. New Orleans, Louisiana, USA. The International conference offers a focus on “Emerging Trends and Innovations in Otolaryngology-ENT”. For more details, visit us: http://ent.alliedacademies.com/ The ENT 2017 will cover the various key issues related to Head and Neck such as Head and Neck Surgery, Otolaryngology (ENT),
09-14-2011 | Media & Telecommunications
DeLuca & Nemeroff
DeLuca & Nemeroff Announces $7.55 Million New Orleans Asbestos Verdict
NEW ORLEANS – The Dallas-based trial law firm DeLuca & Nemeroff is announcing a $7.55 million jury verdict on behalf of a Louisiana man who was diagnosed with malignant mesothelioma following decades of working around asbestos-containing materials at two manufacturing plants. This verdict is believed to be among the largest individual mesothelioma verdicts in Louisiana. Orleans Parish jurors deliberated for half a day on Thursday, Sept. 8, 2011, before returning
06-15-2011 | IT, New Media & Software
Sideways Designs
Leading New Orleans Web Design Company Launches New Website
The internet is full of poorly designed websites. There are also plenty of organizations that have little to no web presence at all. That's where Sideways Designs comes in. They design and redesign websites to create a strong and unique web presence for non-profits, small businesses, artists & musicians in the New Orleans area and nationwide. This allows them to convert web visitors into new customers and
08-29-2008 | Sports
Saintshome.com
The New Orleans Saints team is getting more fans
The New Orleans Saints are a professional American football team based in New Orleans, Louisiana. The Saints play in the Southern Division of the National Football Conference (NFC) in the National Football League (NFL). The Saints tickets were founded in 1967, as an expansion team. They went more than a decade before they managed to finish a season with a .500 record and two decades before having a winning
Comments about openPR
Your portal is fast, simple, and easy to use. Others may have more functions but they also demand more editing time, you have to preformat the text in order to achieve a good result etc. I think openPR is really fantastic!
Andreas Knepper, wallmedien AG