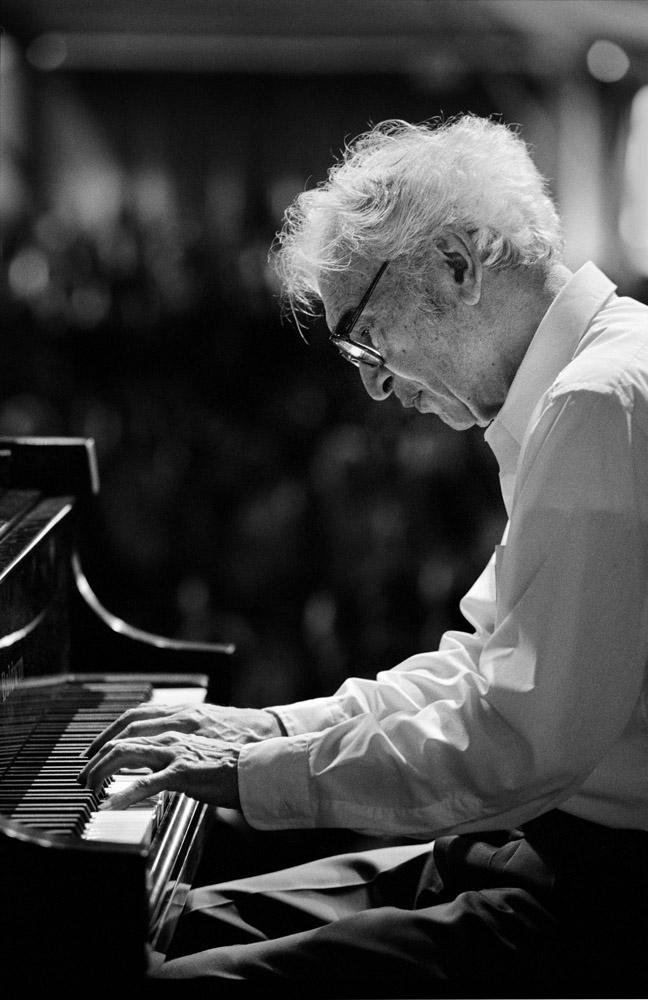 New Orleans photographer Skip Bolen donates a larger than life 40x60 inch black and white photograph of Dave Brubeck on stage performing at the New Orleans Jazz and Heritage Festival in 1999 to the Ogden Museum of Southern Art for its annual gala and auction, O What A Night, on Saturday, October 9th, 2010.  The evening promises to be quite the event of the Arts Season in New Orleans with art, music and culinary talents that reflect the importance and influences of New Orleans culture. There will be a special Auction Preview Party to be held at a private uptown home on Friday, October 8th.  Works of art that will be available for auction during the Ogden Museum's O What A Night Gala will be on display in the Museum's lobby and third floor.  Auction offerings include the Skip Bolen's 40 x 60 inch framed large black and white photograph of "Dave Brubeck performing at the New Orleans Jazz and Heritage Festival in 1999" in addition to works of art by many other local and regional artists and photographers.Skip Bolen is a southern photographer known primarily for his natural-light images of musicians accompanied with his nostalgic take on the depth, emotions and richness of historic architectural imagery of cemeteries, water towers, classic vintage signs, landmarks and various notable scenes in New York, Los Angeles and his hometown of New Orleans. Born just outside of New Orleans, Skip Bolen has been "capturing moments" since he took his first photo at the age of 8 with a Kodak Instamatic 124 camera where he soon developed an early fascination with photography. Later, he moved to New Orleans to pursue a career as a graphic designer and art director in publishing by day while photographing in music clubs at night with an Olympus OM-2 camera - one of the first bands he photographed were The Ramones. Several years later and following his dreams, he moved off to New York City and landed a job at Conde Nast Publications as a junior art director under Editor-in-Chief Anna Wintour and Editorial Director/Artist Alexander Liberman where he was able to see and study many of the photographic works of such giants as Edward Steichen, Horst P. Horst, Cecil Beaton, Henry Clarke, Philippe Halsman and many other great Conde Nast photographers. He studied for a short while at the International Center of Photography, spent most of his time after hours in New York galleries studying photography while spending many late nights in Greenwich Village Jazz clubs where the work of Blue Note jazz photographer Francis Wolff would soon heavily influenced him. After living in New York City for several years, he moved back home to New Orleans to pursue his photography full time where he bought his first Leica camera and a set of Leica lenses - mostly to photograph jazz musicians in his studio in the French Quarter and in jazz clubs. He quickly became influenced and further inspired by the extraordinary photographic works of his dear friend, jazz photographer Herman Leonard. After living in New Orleans again for several years, he headed out west to Los Angeles to work as Creative Director at the House of Blues which offered him an exclusive inside backstage advantage to photographing musicians performing in clubs and concerts where he eventually became a freelance contributor for several publications and wire services. Realizing yet again it was time to chase dreams and move on after living in Los Angeles for several years, Skip decided to move back home to New Orleans in 2006 to photo-document the rebuilding and recovery of New Orleans after Hurricane Katrina and to once again pursue photography full-time. He also remains forever in photographic pursuit of impromptu moments that display the heart and soul of what is Jazz.  Today, Skip Bolen lives in New Orleans and travels regularly to Los Angeles and New York City pursuing his own personal photography projects full time while constantly chasing after freelance assignments. He is also a member of IATSE Local 600 (International Cinematographers Guild) and works as a unit stills photographer in the motion picture and television industry. Additionally he shoots a variety of entertainment related events for Getty Images and WireImage.com. Skip Bolen's archive of film negatives and digital images along with his acclaimed portfolio of portraits of well-known and rising sensation jazz artists and other musicians both on and off stage numbers in the tens of thousands. His photographs are in public and private collections, among them the Ogden Museum of Southern Art in New Orleans and the Louisiana State Museum. His photography has appeared in various publications including The New York Times, Life, Rolling Stone, Vogue, New York Post, US Weekly, Elle, MTV, VH-1, New York Magazine, Jazz Times, Downbeat, and many others. Skip Bolen was the unit photographer for HBO’s season two finale of “True Blood” and on HBO’s pilot “Treme” by David Simon, and was the unit photographer on TNT’s Season One of “Memphis Beat”. Skip Bolen is represented internationally by WireImage.com, Getty Images and European PressPhoto Agency.Additional information on the Ogden Museum of Southern Art annual gala and auction, O What A Night, can be found at: http://www.ogdenmuseum.org/owan_2010.htmlMuch of Skip Bolen’s work can be seen at www.SkipBolenStudio.com and www.SkipBolen.comSkip Bolen is a southern photographer of musicians, architecture, interiors, old signage, lifestyle and the culture of New Orleans and southern United States. He is also a member of the IATSE Union 600 (International Cinematographers Guild, Jazz Journalists Association, NPPA, and Advertising Photographers of America. Skip Bolen is represented internationally by Getty Images and WireImage.com and European PressPhoto Agency.Skip Bolen Studio P.O. Box 51295 New Orleans, LA 70151-1295 USA Tel: 213.840.9259 E-mail: sbolen@skipbolenstudio.com www.SkipBolenStudio.com www.SkipBolen.com Press Contact: Skip Bolen

You can edit or delete your press release Jazz legend Dave Brubeck makes a rare appearance at the Ogden Museum of Southern Art in New Orleans... here