Green Building Event of the Year 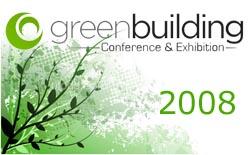 The Green Building Conference is just a mere few weeks away. The conference is to be held at the Vodaworld (Midrand) on the 21st to 23rd of August. This year’s green event promises to exceed all expectations and cover more ground than last year’s green building event. Due to all the changes in the industry, with professionals both nationally and globally working hard to push the ‘green’ envelope, information, techniques and programmes is flooding into the industry. Green Building Conference and Exhibition has filtered through all new, relevant information and with the help of high-level speakers, such as Mich Pearch from Design Inc in Australia, Llewellyn van Wyk who is the head of the CSIR, as well as Simon Wossner from the Fraunhofer-Institut Bauphysik in Germany, and Fanuel Motsepe from the Gauteng Institute for Architecture, have determined key issues to present to delegates from all fields in the industry. With last year’s green building event answering the question of what is ‘green,’ this year they will be focusing on how to be ‘green.’ Some of the topics include Green Building Design, Green Building Materials and Green Building Technologies. Dr Daniel Irurah from the University of the Witwatersrand will be reviewing the new Green Star rating system, basing his presentation on the newly released Pilot version from the South African Green Building Council. Another key system that has been released for public comment is the South African National Standards 204, which focuses on energy efficiency standards for all new and built buildings in South Africa. This review will be discussed by Howard Harris from the WSP Group. One of the biggest construction projects happening right now in South Africa is the various stadiums and buildings being built for 2010 World Cup. Jermey Gibberd, an Architect from the CSIR will be giving a presentation on the greening of the 2010 stadiums, looking at the various sustainability issues and green implementations. The Green Building Conference will also include two break-away sessions, a catch-up on the Retrofitting Seminar from earlier this year, as well as a presentation on the new Lexus Hybrid Technologies. With limited seats available, book now by clicking here to ensure your ticket at this year’s Green Building Conference 2008. For further information, contact Tanitha on 021 674 5725 or Tanitha@greenbuilding.co.za. Green Building Media 4th Floor Sunclare Building Dreyer Street Claremont Cape Town 7800 (021) 674 5709 celeste@greenbuilding.co.za http://www.greenbuilding.co.za Celeste Green Building Conferences and Events was established last year in South Africa and was the first company to push the ‘green’ envelope from a media perspective in S.A. They created South Africa’s online green building information portal at greenbuilding.co.za and followed with the Green Building Conference 2007. This year they held the Retrofitting Seminar in April and are hosting and partnering a variety of other sustainable events. For more information, go to the website at http://www.greenbuilding.co.za

05-15-2009 | Energy & Environment
Green Building Media
Green Building Conference 2009
Green building has grown over the year’s from strength to strength as property owners, investors, blue chip tenants (public and private) have realised the importance and the possibilities of building for a sustainable future. At this year’s Green Building Conference, high-levelled local and international professional speakers from different sectors will be sharing their knowledge and experience of ‘green’ building. The conference aims to find sustainable and practical ‘green’ solutions which can
10-09-2008 | Energy & Environment
Green Building Media
Join in the Green Building Online Community
Green Building Media has launched a new forum platform for all professionals, educators and property owners who are looking for answers, solutions or would like to share their knowledge in green building. The forum is officially open for registration and allows members to post questions or stories in the different categories. Green Building Media is hoping all experts, beginners and intermediates join up and post stories, questions and facts about green
09-26-2008 | Industry, Real Estate & Constr …
Green Building Media
Green Building Media Videos
Green Building Media has installed a video component to their website, expanding the multimedia experience to the built environment in South Africa, involved in green building. Currently they are streaming in podcasts globally and are hoping to expand their selection to cover conferences and events, with speakers and experts presenting useful information on green techniques, designs, construction, and materials and products that are environmentally friendly. This just brings a whole new aspect

02-21-2019 | Health & Medicine
Meetings International Pte Ltd
Surgery Conference
5th International Surgery and Surgeons Meet will be organized on June 26-27,2019 in New York, USA. The conference highlights the theme “Disseminating advance research and Innovative Technology in the field of Surgery”. Surgeons Meet 2019 aims to gather leading surgeons, eminent scientists, research scholars, students along with industrial and pharmacy professionals to express their views on the latest technologies for future Surgery research. The event is designed in a way
01-23-2018 | Health & Medicine
Conference Series LLC
Surgery Conference 2018
After the successful conference of Surgical Nursing and Nursing Education 2017, Conference Series Ltd is bringing forward another conference on 28th Surgical Nursing and Nurse Education Conference (Surgical Nursing 2018) which is scheduled on August 08-09, 2018 at Osaka, Japan with a theme of “Innovative Innovations towards Surgical Nursing and Nurse Education”. The conference invites all the participants across the globe to attend and share their insights and convey recent
05-15-2017 | Advertising, Media Consulting, …
Conference Series LLC
Pediatric Nursing 2017 Conference
Recommended | Nursing Conferences | Pediatric Nursing Conferences Conference Series LLC takes immense pleasure & feels honoured in inviting the contributors across the globe to attend the “28th International conference on Pediatric Nursing & Healthcare which will be held in September 04-05, 2017 at Edinburgh, Scotland. Target Spectators: We extend warm welcome to distinguished Pediatric Nobel laureates, Speakers, Delegates, Exhibitors, Researchers, students around the world to explore the
05-04-2017 | Health & Medicine
Confereceseries LLC
22nd World Cardiology Conference
Diabetes Mellitus: A Major Risk Factor for Heart Diseases There has been a dramatic increase in the incidence of Diabetic heart disease worldwide, which has been exacerbated by the growing risk factors including Hypertension, abnormal blood lipids and obesity. Diabetic heart disease" (DHD) refers to heart disease that develops in people who have diabetes. If you have diabetes you are two to four times more prone to cardiovascular disease that affect
01-29-2013 | Advertising, Media Consulting, …
Bulgaria PR Office
SEO Conference 2013 Bulgaria
On March 22, over 400 people are expected to arrive at the Inter Expo Center Sofia in Bulgaria for the SEO Conference 2013. As noted on the SEO Conference Bulgaria – official site, the event, which will take place from 9 a.m. to 7 p.m., is the country’s main conference that focuses on search engine optimization and marketing. It is also an outstanding meeting place for customers, optimizers and representatives
11-07-2012 | IT, New Media & Software
University of Duisburg-Essen
LINQ Conference Successfully Concluded
The 1st European Conference LINQ 2012 on "Learning Innovations and Quality" took place to great success on the 23rd of October in Brussels. The organizers from the University of Duisburg-Essen in Germany and the Q-Cert-VET project consortium greeted a variety of international authors, European project representatives, and participants from over 20 countries who came to take part in the development of a discussion on the potential points of interaction between
Comments about openPR
We publish our press releases on openPR.de because we like people who are "open" - just like us.
Frank Obels, CEO, INCONET - Informationssysteme, Communication und Netzwerkberatung GmbH