Graphic Art: A German Private Collection – Expressionism at its best 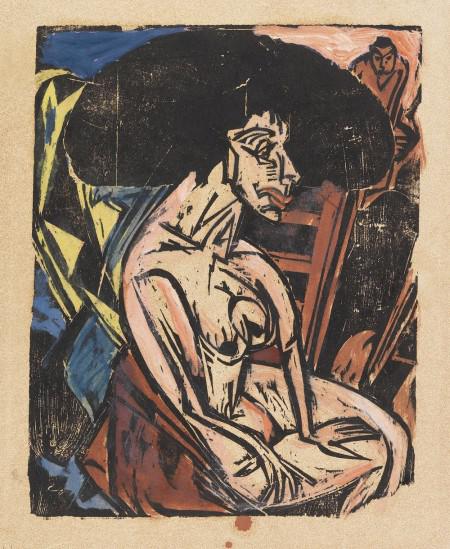 Munich, 10 April, 2017 (kk) – The small but fine collection of a German art lover offers nothing less but extraordinary works of art. The selection, which has a focus on expressionist works by the “Brücke artists”, will be called up in context of the Ketterer Kunst auctions from 8-10 June in Munich. “I was totally blown away“, is how the collector describes his feelings when he saw paintings by Karl Schmidt-Rottluff for the first time upon a visit to the ‘Frankfurter Kunstkabinett‘ shortly after World War II. He fell for his rough woodcut style. In the following he developed a liking for works from other members of the artist group “Die Brücke“ as well. He was fascinated by their style, especially as it was so different from everything that had been considered “beautiful“ by then. Together with his wife, who was particularly taken with the works by Otto Mueller, he visited scores of exhibitions. It didn‘t take long before they would not settle with just viewing any longer, eventually the couple bought its first expressionist work, Ernst Ludwig Kirchner‘s “Drei Akte im Walde“, in 1962. The auction at the ‘Stuttgart Kunstkabinett’ of Roman Norbert Ketterer, uncle of Robert Ketterer, today owner and managing director of Ketterer Kunst, marked the beginning of a marvelous collection characterized by great passion.The former businessman bought another sheet from the Kirchner estate from Roman Norbert Ketterer: the hand-colored woodcut “Die Geliebte“ from the portfolio “Bilder zu Peter Schlemihls wundersamer Geschichte von Albert von Chamisso“ from 1915. Both works will be called up in context of the summer auctions with estimate prices of € 40,000-60,000 and € 100,000-150,000 respectively.“I am delighted,“ says Robert Ketterer, “that now the circle closes and that we have the wonderful opportunity to offer the Kirchner works that once were acquired from my uncle, as well as 30 other gems from a collection compiled with outstanding expertise and passion.“ Every single item from the range has some sort of unique character, as the collector put strong focus on works of which only very few copies were made, we also find trial proofs or works that have something special to them, such as an additional coloring.Next to Hermann Max Pechstein‘s woodcut “Badende XI“ from 1911 (estimate: € 30,000-40,000), other exciting works are Otto Mueller‘s lithograph “Zigeuner-Liebespaar 2“, Erich Heckel‘s woodcut “Kinder auf der Bank“ and Emil Nolde‘s etching “Dampfer (Groß Dunkel)“ (estimates: € 18,000-24,000 each), as well as three more works on paper by Ernst Ludwig Kirchner (estimates: € 20,000-30,000 each).Further significant works in the June auctions come from, among others, Josef Albers, Stephan Balkenhol, Georg Baselitz, Willi Baumeister, Max Beckmann, Chuck Close, Heinrich Maria Davringhausen, Gabriele Münter, Ernst Wilhelm Nay, Serge Poliakoff and Gerhard Richter (see separate press release).Previews in Germany and Switzerland Preview 04 – 06 May – Ketterer Kunst, Holstenwall 5, 20355 Hamburg* 09/10 May – Galerie Römerapotheke, Rämistr. 18, 8001 Zürich, CH* 14 – 16 May – Galerie Schwind, Fahrgasse 8, 60311 Frankfurt* 19 – 22 May – Ketterer Kunst, Malkastenstr. 11, 40211 Düsseldorf* 26 May – 01 June – Ketterer Kunst, Fasanenstr. 70, 10719 Berlin* 03 – 09 June – Ketterer Kunst, Joseph-Wild-Str. 18, 81829 Munich *** selected works ** all works Auctions in Munich 08 – 10 June - Modern- / Post War- /Contemporary ArtSince it was founded in 1954, Ketterer Kunst has been on the forefront of auction houses dealing in Fine Art and Rare Books, with its headquarters in Munich, and a branch in Hamburg. Representatives' offices in Berlin, Heidelberg, Duesseldorf, the Benelux Union, France, Italy, Switzerland and the US have contributed substantially to the company's success. In addition, exhibitions, special thematic and charity auctions as well as monthly online auctions at www.ketterer-internet-auction.com are regular events at Ketterer Kunst. Robert Ketterer is owner and CEO of Ketterer Kunst.Press inquiries: Ketterer Kunst Joseph-Wild-Str. 18 81829 München Michaela Derra M.A. Telefon: +49-(0)89-55244-152 Fax: +49-(0)89-55244-177 E-Mail: m.derra@kettererkunst.de www.kettererkunst.de Client inquiries:Ketterer Kunst Joseph-Wild-Str. 18 81829 München Tel. +49-(0)55244-444 Fax.: +49-(0)55244-177 E-mail: infomuenchen@kettererkunst.de

You can edit or delete your press release Graphic Art: A German Private Collection – Expressionism at its best here

05-25-2018 | Business, Economy, Finances, B …
Market Study Report
Global Otoscopes Market Research Report Analysis: Firefly, HEINE Optotechnik, KI …
Otoscopes are a medical device useful in assisting the physician in making a physical diagnosis of ear-related ailments such as infection, irritation, ear pain, ear discharge, and redness. Otoscopes market to grow at a CAGR of 4.02% during the period 2018-2022. The prime objective of Otoscopes Market report is to help the user understand the market in terms of its definition, segmentation, market potential, influential trends, and the challenges that the market
04-06-2018 | Advertising, Media Consulting, …
Containerized Solar Generators Market
Global Containerized Solar Generators Market Forecast 2018-2025 Kirchner Solar, …
Survey Containerized Solar Generators Market 2018 A market study "Global Containerized Solar Generators Market" examines the performance of the Containerized Solar Generators market 2018. It encloses an in-depth Research of the Containerized Solar Generators market state and the competitive landscape globally. This report analyzes the potential of Containerized Solar Generators market in the present and the future prospects from various angles in detail. The Global Containerized Solar Generators Market 2018 report includes
11-29-2016 | Business, Economy, Finances, B …
Fior Markets
Global Otoscope Market 2016 - 3M, Welch Allyn, Keeler, Riester, HEINE, CellScope …
This report provides detailed analysis of worldwide markets for Otoscope from 2011-2016, and provides extensive market forecasts (2016-2021) by region/country and subsectors. It covers the key technological and market trends in the Otoscope market and further lays out an analysis of the factors influencing the supply/demand for Otoscope, and the opportunities/challenges faced by industry participants. It also acts as an essential tool to companies active across the value chain and
10-23-2012 | Energy & Environment
Kirchner Solar Group
Kirchner Solar Group and develoPPP.de launch large electrification project in Ug …
Modular solar generator solargenset empowers sustainable, green and affordable power supply for rural areas Alheim-Heinebach, October 18, 2012 – Kirchner Solar Group, an international manufacturer, project developer and vendor of solar solutions, implements a large solar power supply project in Uganda, East Africa. The project is supported by means of a development partnership in the context of the develoPPP.de program, run by the Deutsche Gesellschaft für Internationale Zusammenarbeit (GIZ) GmbH (German
10-16-2012 | Energy & Environment
Kirchner Solar Group
Kirchner Solar Group expands to Poland
Solar company presents its product portfolio of innovative photovoltaic solutions at RENEXPO® Poland in Warsaw from October 17-18, 2012 Alheim-Heinebach, Germany, October 11, 2012 – The Kirchner Solar Group, an international manufacturer and project developer of solar systems, present their product portfolio of innovative and powerful solar power generation solutions at the RENEXPO® Poland in Warsaw on the 17th and 18th of October, 2012. Thereby, the solar company will expand its
03-16-2012 | Energy & Environment
Kirchner Solar Group
Kirchner Solar Group off to a strong start in the Greek market
Only one month after foundation: subsidiary Kirchner Solar Hellas with strong order situation Alheim-Heinebach, Germany, March 15, 2012 – Kirchner Solar Hellas, the newly founded Greek subsidiary of Kirchner Solar Group, shows an exceptional business performance despite the currently difficult market situation. According to the company, the comfortable order situation is a result of the in-house developed financing solutions, many years of market and service experience as well as individual
Comments about openPR
I can't but agree to the positive statements about your portal: easy to use, clear layout, very good search function, and quick editing!
Jens O'Brien, Borgmeier Media Communication