Spring in Vienna, royal chaos and a jewish preacher 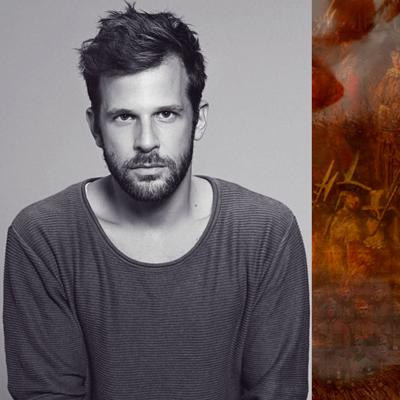 The project “Royal Chaos” departs from the Gestalt psychological term “supersummativity”, which is, the concept that the total is more than the sum of its parts. Cognition and perception are based on complex relationships that are impossible to explain just by analyzing individual parts. By weaving different layers of images together, the project creates a multi-dimensional experience through moving form and color that allows the pictures to come alive. Thus, a journey of the mind begins for the observer who encounters this series, where what is recognizable is suspended and the viewer finds him or herself entangled in a visually distorted world, where subjective emotional responses offer the only form of orientation.For this exhibition, Bernhard Musil used the photographic technique of double exposure to engender controlled chaos. Musil references aesthetic principles from the history of art: referencing Italian Mannerism, the artist works against well-balanced composition or ideal harmony by passionately exaggerating forms. Pointing to the Habsburg Baroque, the various images combine to create a total work of art, an orgiastic interaction of different disciplines whose borders are smudged. Indeed, each image in this series is created with up to thirty different photographic layers that are brought together using multiple techniques. Some elements are immediately recognizable, while others take more time to see. Musil combines photographs from unrelated fields and eras, but mainly focuses on religion, fashion and the erotic, while incorporating urban impressions, geometrical structures as well as reproductions of classical paintings and historical documentation.The basic principle behind Musil's work is highlighting the complexity of everyday experiences: chains of thoughts and impressions that accompany one on his or her way to work, when taking a walk, or while watching television—these experiences vary along the range of subjectivities. Such mental images reflect daily, semi-conscious experiences as well as flows of emotions and reflections, together impossible to articulate fully in their complexity. These pictures attempt to visualize such subjective interiority. For each and every one of us, our internal stream of images are idiosyncratically interlinked and difficult to break down, separate and categorize, as if each were a single snapshot. Instead, one experiences life as an interplay - each trajectory of movement propelled by individual experiences, associations and moods. Encountering these images, the pieces appear as a static entity, yet the degree of movement embedded within each stimulates a range of imaginations, sensations, and observations, depending on the viewer’s mood and circumstance. Rather than dictating one particular “way of seeing”, the images offer a totality of individual associations, a matrix for numerous ways of seeing, a composite multiplicity of subjective visions._________Vernissage: TAKE Festival for Independent Fashion and Arts 25th-29th April 2017Adress: Alte Post, Dominikanerbastei 9-11, 1010 WienTickets online: take-festival.com/ticketsborn 1980 in Klagenfurt/Austria studied communication science and publishing at University of Vienna and visual mediadesign at the University of Applied Arts Vienna Started 2000 assisting several photographers in Vienna, such as Oliver Ottenschläger, Inge Prader, Markus Morianz, Marcel Gonzales, Oliver Gast and Joe FishAfter several temporary employments abroad (Miami, Milan, London) he moved 2005 to Berlin, which is still his current basewww.be-musil.comKarma und Piloten Elias Paurnfeindt Eyss Florian-Geyer-Str. 8 81377 Münchenkontakt@karmaundpiloten.de www.karmaundpiloten.deT. 0049-89-2000681-68 F. 0049-89-2000681-11

You can edit or delete your press release Spring in Vienna, royal chaos and a jewish preacher here

08-22-2017 | Arts & Culture
BIENNALE AUSTRIA - Verein zur Förderung zeitgenössischer KünstlerInnen
Blue bleu blau blu 2017 Vienna
BIENNALE AUSTRIA association presents on occasion of the exhibition "blue bleu blau blu 2017 Vienna“ positions of artists from Australia, Denmark, Egypt, Germany, Finland, Israel, Italy, Kenya, Netherlands, Russia, Switzerland, Serbia and Austria on the subject of BLUE from 16 – 22 October 2017 at AUSSTELLUNGSRAUM, Gumpendorfer Strasse 23, 1060 Vienna, Austria. “Leonardo da Vinci describes the nature and effect of the color BLUE as immaterial, BLUE is not a color
02-17-2011 | IT, New Media & Software
InterNetX GmbH
InterNetX at Domain pulse 2011 in Vienna
(REGENSBURG – VIENNA, February 17, 2011) – This year, the German-speaking branch meeting Domain pulse is taking place on February 17 and 18, 2011 in the Austrian city of Vienna, with the participation of InterNetX. It is the third time that the Austrian registry nic.at is hosting the event in the capital city. The historical Palais Ferstel is the backdrop for this eighth Domain pulse event and provides the perfect
09-05-2008 | Tourism, Cars, Traffic
Vienna City Tours
Vienna Tour Company, Vienna City Tours Announces New Website
Vienna City Tours, a company that offers guided tours in Vienna, Austria, announces their new website. The company offers many different types of Vienna tours that can be personalized to fit any tourist. VIENNA, AUSTRIA – Vienna City Tours, a company that specializes in guided tours in Vienna, recently announced their new website design. The website allows customers to easily find what types of tours are available and is full of information
07-14-2008 | Fashion, Lifestyle, Trends
juicy pool
VIENNA DESIGN WEEK - Vienna – A City Full of Design
The aim of VIENNA DESIGN WEEK is to show and enable people to experience the many-faceted creative work in the fields of product, furniture and industrial design, but also positions of experimental design. After a successful first festival last year, the work of numerous designers from Austria and abroad will also be presented this October with a growing programme of events. International Design in Vienna In cooperation
01-06-2006 | Tourism, Cars, Traffic
Joe Mancuso
2006 Mozart Year in Vienna/Austria
From January 27 to 29 there will be a great party in Vienna celebrating Mozart`s 250th birthday. It will be an open party for everyone. Mozart`s birthday will be celebrated all over the city with music, films, and several other, sometimes surprising themes. There are five different tours: Mozart Friends and Enemies Mozart Viennese and Cosmopolitan Mozart Art and Love Mozart Life and Death Mozart Yesterday and Today Each of these special Mozart Tours contains four
09-02-2005 | Business, Economy, Finances, B …
continua unternehmensentwicklung
European Venture Market Vienna
European Venture Market Vienna November 8th – 9th 2005 Nationalbibliothek – Wien www.europeanventuremarket.com The European Venture Market is a platform to facilitate the meeting of entrepreneurs and investors. It is a platform for any kind of financing with focus to equity. Giving the wide variety of investors joining the platform the Market is also suitable for any sectors. The European Venture Market is informal, discrete, personal and professional. Meet professionals with a high
Comments about openPR
OpenPR is clearly structured and remains true to its principle of confining itself to the essential parts. OpenPR has proven to be a very good and reliable partner to our media agency: Within the shortest time the releases are online and go down well with the media representatives. The success of OpenPR is reflected in the steadily increasing number of press releases. It is good that OpenPR exists!
Ursula Koslik, Director Marketing & PR, F+W Hamburg