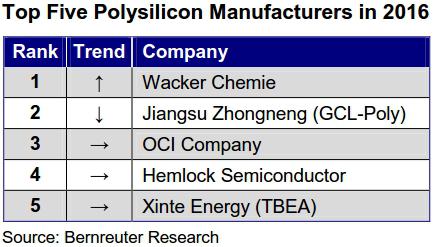 Bernreuter Research: German producer has superseded GCL-Poly as No. 1Würzburg (Germany), March 30, 2017 – The German chemicals group Wacker Chemie AG has become the world's largest manufacturer of polysilicon, the feedstock for semiconductors and solar cells. With a production volume of more than 70,000 metric tons (MT) in 2016, Wacker superseded Jiangsu Zhongneng Polysilicon, a subsidiary of GCL-Poly Energy Holdings Ltd. in China, which produced 69,345 MT. Jiangsu Zhongneng was the number one from 2013 through 2015."Wacker has benefitted from the smooth ramp-up of its new polysilicon plant in Tennessee (USA) while GCL-Poly's bet on low-cost fluidized bed reactor technology for producing polysilicon granules has not paid off," comments Johannes Bernreuter, head of the polysilicon market research firm Bernreuter Research and author of the Polysilicon Market Outlook 2020.Wacker's new plant has an annual capacity of 20,000 MT, thus bringing the company's total polysilicon production capacity to 80,000 MT. It is almost completely based on the established Siemens process; only a small semi-commercial facility in Burghausen (Germany) with an annual capacity of 650 MT has been using fluidized bed reactor (FBR) technology since 2009. In contrast, GCL-Poly has tried to expand its existing Siemens reactor capacity of approx. 76,000 MT by a large 25,000 MT FBR plant, but the project has encountered technical difficulties.For years, the number one position in the polysilicon industry was the domain of US-based manufacturer Hemlock Semiconductor, which was the world market leader from 1994 through 2011. "Hemlock lost its place in the sun in 2012 when new management changed course and began to insist on the high polysilicon prices fixed in long-term contracts with its customers," explains Bernreuter. "Above all, however, the prohibitive duties that China introduced on polysilicon imports from the USA in 2013 have diminished the accessible market for the company considerably." According to preliminary estimates of Bernreuter Research, Hemlock came in on the number four spot in the 2016 manufacturers' ranking. REC Silicon, the other large US-based polysilicon producer, even dropped out of the top ten.Wacker already occupied the top position for one year in 2012, but fell back to number two in 2013 as GCL-Poly's aggressive expansion strategy made an impact at the time. In view of GCL's failed FBR ambitions, however, Bernreuter expects that Wacker's second ascent to the top will be more than a one-year intermezzo: "Wacker will remain the number one for at least a few years until GCL-Poly has established new Siemens reactor capacity in Xinjiang."Analysis and forecast of production volumes and market shares of the top ten polysilicon manufacturers through 2020 are provided in the Polysilicon Market Outlook 2020. The 70-page report contains bottom-up scenarios of supply and demand, detailed forecasts of polysilicon prices and manufacturing costs through 2020 as well as the latest development of FBR technology. For more information on the report, please go to: http://www.bernreuter.com/en/shop/polysilicon-market-reports/market-outlook/report-details.htmlAbout Bernreuter ResearchBernreuter Research was founded in 2008 by Johannes Bernreuter, one of the most reputable photovoltaic journalists in Germany, to publish global polysilicon market reports. As early as 2001, Bernreuter authored his first analysis of an upcoming polysilicon bottleneck and new production processes. Since publishing its first report in 2010, Bernreuter Research has gained a reputation of providing the most comprehensive and accurate polysilicon reports on the market.Press Contact: Bernreuter Research • Polysilicon Market Reports Lessingstr. 6 • 97072 Würzburg, GermanyYour Contact Partner: Johannes Bernreuter, Company Head Telephone: +49/931/784 77 81 E-mail: info@bernreuter.com