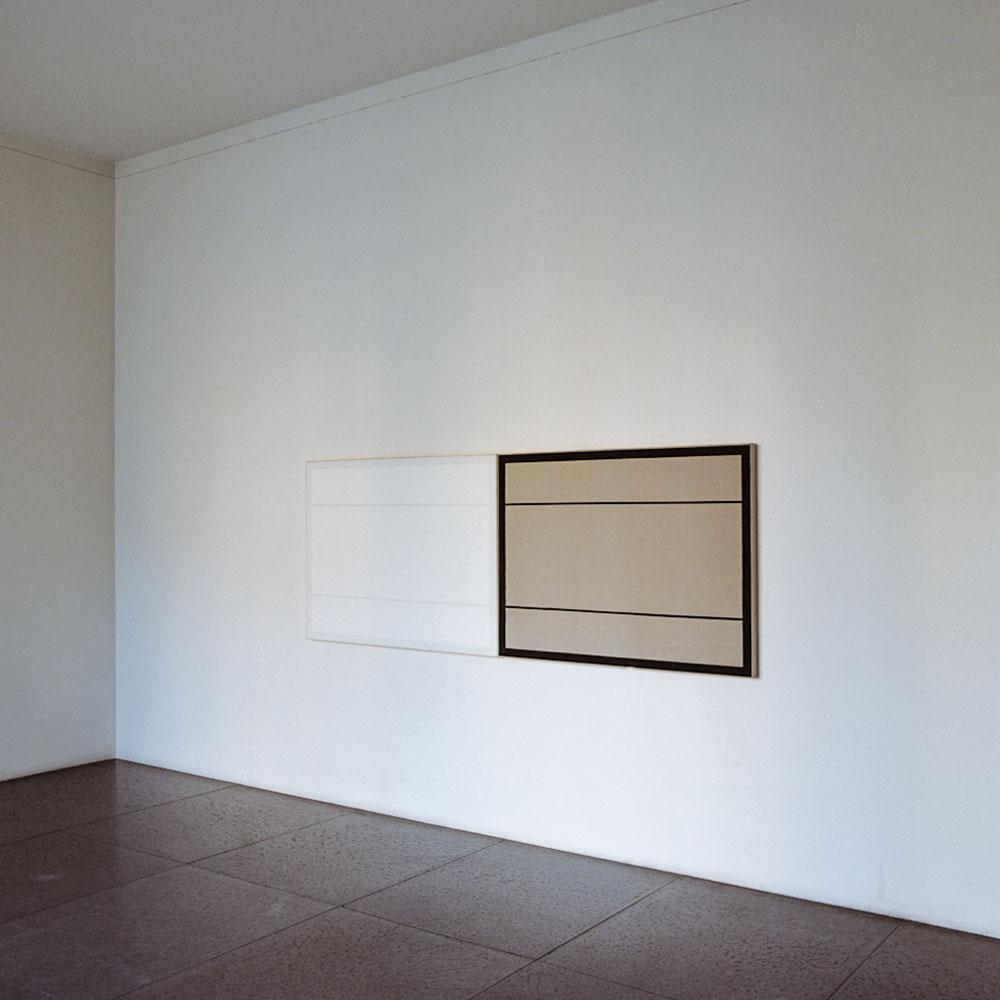 Alan Johnston, Untitled 1993 to be presented at Art Cologne 2017

Bartha Contemporary is pleased to announce their participation at the 2017 edition of Art Cologne. The presentation will feature a solo-exhibition of works by Alan Johnson from the 1970’s to the present day. Alan Johnston’s presentation at Art Cologne will feature works made over the past five decades. Since his first solo exhibition at Konrad Fischer in Düsseldorf in 1973, Johnston has continuously exhibited internationally. Indeed the exhibitions at Art Cologne and at the gallery in London will feature seminal works that were first exhibited in Museum exhibitions such as the 1978 exhibition at the Museum of Modern Art Oxford to the 2015 exhibition at the Mies van der Rohe Haus in Berlin, as well as Henry Moore Institute Leeds, Fruitmarket Gallery Edinburgh, Haus Wittgenstein Vienna and Inverleith House Edinburgh and others alongside key works from exhibitions held at important commercial galleries including Nigel Greenwood Gallery London, Jack Tilton Gallery in New York, Shimada Gallery in Yamaguchi and Tokyo to name only a few.Institutional collections include Tate Britain; Scottish National Gallery of Modern Art, Edinburgh; Inverleith House Royal Botanic Garden, Edinburgh; Pier Art Centre, Stromness Orkney; Charles Carpenter Collection at The Carnegie Museum, Pittsburgh; Museum of Fine Art, Houston Texas; Yamaguchi Institute of Contemporary Art, Yamaguchi; AIAV, Akiyoshidai and Prefectural Centre for Contemporary Art, Osaka.Alan Johnston was born in Edinburgh in 1945 where he lives and works. He studied at the Edinburgh College of Art and Royal College of Art London, received a D.A.A.D. Scholarship in 1972 at the Kunstakademie Düsseldorf and has since held several academic positions including Honorary Professor in Fine Art at the University of Dundee and Professor at the Edinburgh College of Art.For further details please do not hesitate to contact the gallery.Bartha Contemporary was founded by Swiss-German couple Niklas and Daniela von Bartha in January 2000. The gallery relocated to its current space in Fitzrovia in early 2012. The program has a strong emphasis on non-figurative and conceptual contemporary art. The gallery represents 18 international emerging and established artists and the estates of James Howell and Rudolf de Crignis. In addition to an ambitious exhibition program with up to five exhibitions held annually at the Margaret Street space, the gallery regularly participates at international art-fairs. Art Cologne was established as "Kunstmarkt Koeln" in 1967, ART COLOGNE is the first and oldest art fair for commercial galleries and dealerships, presenting Modern, Post-war and Contemporary Art. Every Spring, around 200 leading international galleries exhibit a carefully selected and curated collection of high-quality pieces of work from the 20th and 21st Centuries to the general public. In 2016, the art fair celebrated its 50th anniversary.Bartha Contemporary Ltd. 25 Margaret Street London W1W 8RX UK Tel. +44 20 7985 0015 Fax. +44 20 7985 0015 info@barthacontemporary.com / press@barthacontemporary.com www.barthacontemporary.comArt Cologne Messe Köln, Cologne, Germany www.artcologne.com

10-09-2018 | Arts & Culture
gisela graf communications
Georgia. Art for Architecture
Soviet Modernist Mosaics from 1960 to 1990 While buildings in the style of Soviet modernism in Georgia have received global recognition for several decades, the artworks created for architecture during this period – monumental, decorative mosaics – are still waiting to be discovered and appreciated internationally. These glorious, colourful mosaics were, and still are, an independent yet inseparable part of the architecture in Georgia. They express the function of the respective
01-19-2017 | Industry, Real Estate & Constr …
Climaveneta
Contemporary…and sustainable art!
Luigi Pecci Centre Mitsubishi Electric Hydronics & IT Cooling Systems, through its brand Climaveneta, supplied the air conditioning system for the rebirth of the Luigi Pecci Centre, in Florence. After 6 years of construction and being closed for 3 years, The Luigi Pecci Centre for Contemporary Art has once again reopened in Autumn 2016. It is the first institution in Italy to be built from scratch with the specific intent to exhibit,
09-11-2012 | Arts & Culture
Ogilvy Public Relations Worldwide
Art Bengaluru’s International Art Auction
Includes artworks of celebrated International artists & unique lots including sculptures, coffee tables, chairs and other collectors’ items. Bangalore, India, Friday - August 24th, 2012 -- ‘Art Bengaluru 2012’ ( http://www.artbengaluru.in ), South India’s premier festival for contemporary art and culture, presents an iconic event as a part of its celebrations – an International Art Auction ( http://www.artbengaluru.in/auction.html ). The Auction, being presented by well-known auctioneer - Angira Arya, will take
09-14-2011 | Arts & Culture
Light Space & Time Online Gallery
Photography Art Contest Announced by Art Gallery
Jupiter, Florida - September 13, 2011 -- Light Space & Time Online Art Gallery announces a Juried Art Contest with an “All Photography” theme for the Month of September 2011. All photographers from around the world are called upon to make online submissions with the winners being included in the gallery’s October 2011 online art group exhibition. Light Space & Time encourages entries from all photographers regardless of where they
11-15-2010 | Arts & Culture
Alin Media Group
Got Art?
HEY – listen up! We have some exciting news!! We’re having a CONTEST! We are looking to find one talented artist to create our T-Shirt Design. DEADLINE: December 1, 2010 – Winner announced December 31, 2010 We’re selecting 12 artists to display on our 2011 Calendar. The Top 3 Artists will be profiled with their entry on our fan page and voting will be open to everyone on Twitter and Facebook! That's right;
04-01-2008 | Arts & Culture
Asylum Gallery
Call for Mail Art
Artists from around the world are invited to send mail art* on the theme Global Warming: A Hot Time in the Old Town! Pieces should be no larger than 8” x 10” (inches) and received by May 15th. All work received will be exhibited from May 24th to June 22nd. A reception will be held on June 14th for Sacramento’s 2nd Saturday festivities, during which many galleries
Comments about openPR
I can't but agree to the positive statements about your portal: easy to use, clear layout, very good search function, and quick editing!
Jens O'Brien, Borgmeier Media Communication