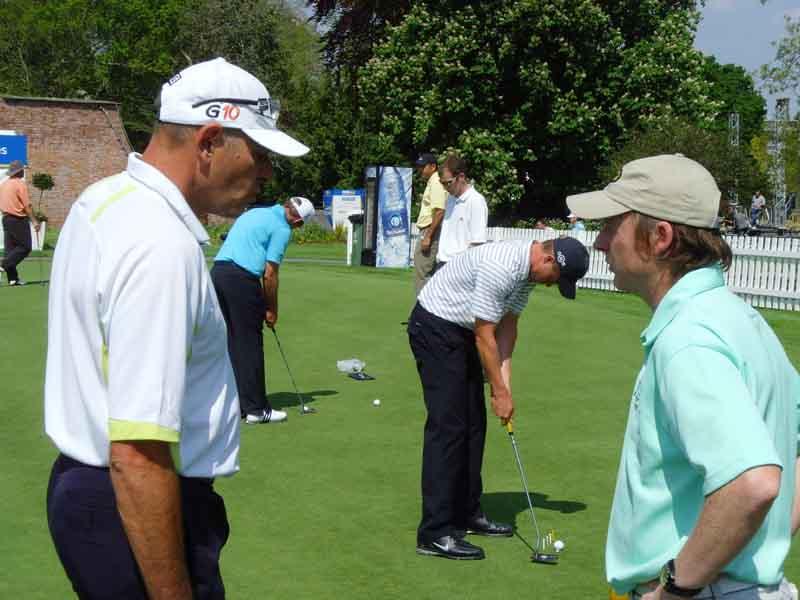 European PGA Tour Report from Phil Kenyon, Director of Instruction at the Harold Swash Putting School of Excellence A steady couple of days in Munich for the BMW Open. First thing on Tuesday I arranged to meet up with Marmat Madan to work with him on his stroke. Having never worked with Marmat before we arranged to meet early to leave plenty of time before the 1st round on Thursday. We used the SAM system and video analysis to create a blueprint from which we then picked out a couple of simple things to start to work on, mainly focusing on the set up. Hopefully Marmat will take some confidence from the session onto the greens this week. I also met up briefly with Mark Brown who was at the studio last week, on his week off. Mark was happy with his new grip. set up and putter and was looking forward to the plan and work ahead. On Wednesday I spent some time with Mark Foster. Mark has had 2 weeks off so we worked on getting back to some basics that help make his stroke work, which include forearm alignment and grip. On both Tuesday and Wednesday I spent some time with Maarten Lafaber. The work Maarten has been doing is starting to bed in and feel more natural, so he was happy going into the event and feeling confident. He also picked up a new Callie fc with a lighter shaft than he has been using. This week Edoardo Molinari picked up a new Callie putter with a prototype shaft that he will do some testing with over the next few weeks. John Bickerton and Peter Lawrie also picked up Donna’s, on which we had changed the sight line for them. Both players prefer a sight line on the top edge instead of the cavity. A note on last week in Saint Omer. It was good to see Rob Coles kick start his season with a fine performance. Rob had a real chance to win the event coming into the back 9, before a couple of bad breaks left him with a seasons best 7th finish. Altogether a better result and hopefully some momentum for Rob. Next week its the French Open and one of the biggest purses of the season for the guys to fight for. Swash Putting Schools Asia/Pacific, Australia, South Africa, Middle East Oakrig House Canning Road Southport Merseyside England United Kingdom PR9 7SW Contact: Michel Monnard, Apartado 44, 07580 Capdepera (Mallorca/Spain) Email: michel@swashputtingschools.com Phone: 0034 639635634 About YES! Golf Yes! Golf, based in Denver, Col., is the proven leader in grooved putter technology. Harold Swash, known as the European putting doctor, introduced the innovative theory of concentric grooves in 1995. Today, C-Groove putters are taking the golf world by storm making Yes! Golf one of the fastest growing putters on the professional tours. For more information on Yes! Golf call 800.845.4327 or www.yesgolf.com About Harold Swash Putting School of Excellence Harold Swash is making his teaching philosophy available for all keen golf teaching professionals who want to learn how to teach Putting better. For more information about The Harold Swash Putting School of Excellence go to www.swashputtingschools.com

10-04-2017 | Arts & Culture
New Generation Publishing
“Invisible Scars” by Peter Sykes is published
ISBN #978-1787195516 “Invisible Scars” by Peter Sykes is published Will Paul and Kate’s marriage survive the stresses of their hospital work and their past traumas? About the Book: Whilst Paul and Kate work alongside each other as doctor and nurse on the surgical ward, strains in their relationship emerge. And when Kate's baby dies and Paul's inexperience costs lives, doubt and despair hang in the air and their marriage appears to be doomed. However, in
06-15-2016 | Politics, Law & Society
McIntyre Thanasides Bringgold Elliott Grimaldi & Guito, P.A.
New Hire: Attorney Peter Hobson
TAMPA-FL (June 10, 2016) Peter J. Hobson is the newest attorney at the law offices of McIntyre Thanasides Bringgold Elliott Grimaldi & Guito, P.A., who will be bringing more than 30 years of experience to the firm. Mr. Hobson was called to the bar in the state of Pennsylvania Bar in 1981 and then Florida in 1983. His legal practice includes trial law, family law, commercial litigation, criminal defense, sports
02-24-2011 | Leisure, Entertainment, Miscel …
Sold Out Ticket Market
Peter Gabriel Tickets for Peter Gabriel New Blood Tour 2011
Peter Gabriel, born 13 February 1950, is an English singer, musician and songwriter who rose to fame as the lead vocalist and flautist of the progressive rock group Genesis. After leaving Genesis, Gabriel went on to a successful solo career. More recently he has focused on producing and promoting world music and pioneering digital distribution methods for music. Gabriel was also awarded the Polar Music Prize in 2009 and inducted
11-26-2010 | IT, New Media & Software
ABAS Software AG
Peter Walser, CTO of ABAS Software AG
Karlsruhe, November 26th, 2010 - Peter Walser has been the Chief Technology Officer of ABAS Software AG since 2007. His rise to the top at the software provider in Karlsruhe was gradual but continuous. In 1983 the computer scientist got to know the company as a student. The foundation for the upgradeable business software had just been laid when he started working in development after finishing his degree. The objective
08-31-2010 | IT, New Media & Software
ABAS Software AG
Peter Forscht, COO of ABAS Software AG
Karlsruhe – For every chronobiologist dealing with the mechanism of the genetically programmed circadian rhythm and its adjustment to the daytime structure of its environment, Peter Forscht would be a good research object: just as others take the subway to go from work to the gym and then back home, he constantly travels back and forth between continents. This is an ideal characteristic to establish the international abas network. Do you
03-15-2010 | Fashion, Lifestyle, Trends
Best Friend’s HOME
Luxury German doghouses on Blue Peter
Paderborn, Germany February 2010 The Paderborn, Germany based label Best friend's HOME builds luxury and exclusive doghouses. After receiving lots of positive press worldwide the BBC invited the young company to their traditional family programme “Blue Peter“ to present two of their doghouses. In the show that aired on the 17th of February, Golden retriever Lucy and Blue Merle Border Collie Mabel immediately fell in love with the exclusive dog homes.
Comments about openPR
We publish our press releases on openPR.de because we like people who are "open" - just like us.
Frank Obels, CEO, INCONET - Informationssysteme, Communication und Netzwerkberatung GmbH