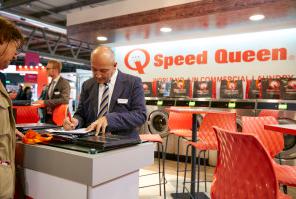 Speed Queen, manufacturers of professional washing machines and dryers since 1908

Speed Queen's history goes back more than a century: 100 years of experience, during which time this brand of washing machine has won Americans' unconditional trust. With the support of Alliance Laundry Systems, in 2014 Speed Queen launched its concept of international laundries: ultra-modern laundromats, designed to ensure optimal customer experience. In contrast to other players in the sector, Speed Queen manufactures its own machines and deals directly with investors, without any intermediaries. Proven performance Speed Queen machines have long been renowned for their performance. Thanks to decades of research, development and radical innovations, Speed Queen washing machines and dryers are unbeaten for their durability and exceptional value. Some American homes have been using the same machine for over 25 years and consider their washing machines authentic collector's items. And with good reason, with professional and industrial quality offered in products intended for the general public. For the 4th consecutive year, in 2017 Speed Queen won the Women Choice Award, making it the best brand of washing machine according to Americans. Shortly after this, Speed Queen also received favorable mention in the European press (French magazine, Capital, Spanish newspaper, La Vanguardia, and Portuguese newspaper, Espresso), thanks to its laundromat concept. Speed Queen's concept of laundries Speed Queen's proposal is aimed at people wishing to open a laundry, embark on an enterprise project and run their own business. Speed Queen's experts guide investors from the very start of their adventure: • Market Research • Assessment of work volume • Choice of the location and size of the future laundry • Choice of equipment and arrangement of the machines. Alone amongst laundry franchisors, Speed Queen is the only brand to manufacture its own machines and cut out all intermediaries. • Works and opening of the laundryThe Speed Queen concept is a turnkey solution that is spreading across Europe: opening a laundromat is a profitable enterprise and one which requires relatively little management (no personnel costs, cash management for essential costs). You are completely free to run another activity at the same time, since it is not necessary to be on site 24/24: just take care of the opening and closing and be on call in case of problems.Speed Queen is the world number 1 in laundromat business. It os the only brand that manufactures professional washers and has its own laundry stores.Speed Queen Nieuwstraat 146 B 8560 Wevelgem Belgium t : +32 56 41 20 54 f : +32 56 41 86 74 info@alliancels.eu http://speedqueeninvestor.com

You can edit or delete your press release Speed Queen, a different concept of laundries here

09-19-2016 | Business, Economy, Finances, B …
Speed Queen
SPEED QUEEN opens a new laundromat flagship store in Shanghai
GLOBAL laundry expert Speed Queen has recently opened a new flagship store on the third floor of Carrefour at Xu Jing in Shanghai. The Speed Queen Laundry Center is the 20th opened by the company since launching in China in 2014. The new store marks the beginning of a new stage of rapid expansion of Speed Queen in China. Speed Queen is dedicated to bringing globally popular self-service laundry to China
07-15-2016 | Leisure, Entertainment, Miscel …
Speed Queen
Speed Queen, the most recommended washer & dryer brand by American women
In a world where every brand strives to distinguish itself favorably, Speed Queen is playing an active role in the advancement of equal opportunity between men and women. In terms of consumers, WomenCertified Inc. is one of America’s largest women’s organizations. Through its advice and rewards, this organization keeps women informed and helps them to be more responsible when purchasing products. For the third year running, Speed Queen has been named as