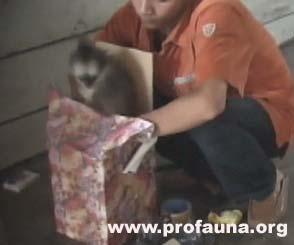 The illegal wildlife trade is rampant in Medan city, North Sumatera, according to a recent investigation conducted by ProFauna Indonesia in collaboration with the International Fund for Animal Welfare (IFAW). It was recorded that around 10,000 wild species endemic to Sumatera Island were poached to supply the domestic and international illegal wildlife trade in 2007. The hub is in Medan, at Bintang animal market. Many protected wildlife such as eagles, cockatoos, slow lorises, gibbons, mitered-leaf monkeys, sun bears and others are sold freely. Each animal could fetch between IDR 100,000 (US$ 11) to IDR 1,500,000 (US$ 160). Some traders in the market also supply other traders in Pramuka market Jakarta, the largest wildlife black market in Indonesia. Every two weeks, wildlife traffickers in Bintang market smuggle about 300 animals to Jakarta through Polonia airport in Medan. Medan is also an exit point of wildlife smuggling to Singapore and Malaysia, through the ports of Belawan and Tanjung Balai in Medan, Kuala Tungkal in Jambi, and Batam, Riau.Investigations have uncovered a corrupt government officer from the Natural Resources Conservation Center (BKSDA) of the Forestry Department, who is involved in the wildlife trafficking between Medan - Jakarta. The officer employs two key methods to illegally aid the poachers. He has been issuing false licences for Wild Plant and Animal Transportation, declaring that the consignments which contained protected animals, as unprotected species. He also overlooks poachers smuggling protected species in specially constructed hidden bottom drawers of carrying crates, which transport the CITES unprotected common song birds that can be transported freely.The smuggling through Polonia airport in Medan usually takes place in the evening when security is slack. ProFauna has successfully filmed the process undercover.The corrupt officer’s involvement in wildlife trafficking mars the department’s commitment to stop crime against wildlife. According to the 1990 wildlife law regarding Natural Resources and Ecosystem Conservations, trading in protected species is prohibited. Offenders will receive up to a 5 year jail sentence and up to IDR 100 millions (US$ 11,000) in fine. Asep R. Purnama, ProFauna’s campaigns officer, stated, “The Forestry Department and the Police must conduct a confiscation operation in Bintang market, Medan.”ProFauna also demands that the Forestry Department and the Police make an example of the corrupt officer and prosecute him to the full extent of the law. Illegal wildlife trade is a cruel crime, that must not go unpunished.On the 18th June 2008, ProFauna Indonesia in collaboration with the International Fund for Animal Welfare (IFAW) launches ‘WILDLIFE TRADE IN MEDAN’ report in Medan, North Sumatera. It is complemented with a film revealing the involvement of a government officer in the crime. For further information please contact Butet A Sitohang, International Communication Officer, mobile: +6281333899741 or email: international@profauna.orgProFauna Indonesia (www.profauna.org) is a wildlife protection organization in Indonesia, established in 1994. ProFauna has become the largest wildlife protection organization in Indonesia with 500,000 member and supporters.

You can edit or delete your press release Indonesia: A Forestry Department Officer Also A Wildlife Trafficker here

12-23-2020 | Advertising, Media Consulting, …
Ken Research Pvt Ltd
Growing Insights of Crop Protection Market Outlook: Ken Research
The crop protection industry has been renovating over the years, with vigorous growth, coupled with moving crop mix trends, and environmental procedures. The effective augment in the population, declining arable land, food security, and the demand for increased agricultural productivity are the significant aspects, which are propelling the demand for greater agricultural output, thus increasing the growth of the pesticide industry, across the world. In addition, the effective growth in
03-02-2020 | IT, New Media & Software
Ken Research
Indonesia Data Center Industry Revenue is expected to reach about USD 2.1 Billio …
o The number of data centers is expected to increase in the future thereby, growing at a positive CAGR of 14.9%, due to surge in the demand for the local data centers. o Jakarta is anticipated to become the data center hub of Indonesia with entry of data center companies in next few years. o The co-location data centers are anticipated to grow at a CAGR of 27.8% and the Managed Data Center at a
11-03-2016 | Tourism, Cars, Traffic
Royal Ambarrukmo Yogyakarta
Royal Ambarrukmo Yogyakarta Announces Didi Sarwono As New Executive Chef
Royal Ambarrukmo Yogyakarta’s General Manager, Ian Cameron, announced the appointment of Didi Sarwono as the new Executive Chef. In his new role, Executive Chef Didi Sarwono oversees all distinguished food & beverage outlets at Royal Ambarrukmo Yogyakarta, including all-day dining Royal Restaurant, The Lobby Lounge & Bar, as well as the upcoming & most-anticipated new coffee shop, Punika Deli, to open this December. “Cooking is all about discovery and sharing that
08-05-2011 | Tourism, Cars, Traffic
Exotissimo Travel
Exotissimo’s North Sumatra Adventure brings the best of Exotic Travel and Jung …
Sumatra is the world’s 6th and Indonesia’s largest island. Its northern area features fertile valleys, lush jungles and rugged mountains, home to an abundance of animal and plant species. This naturally makes it an exotic location for an eye-opening adventure experience. Before embarking on a jungle tour, guests will get acquaintated with the island’s history at Medan, the region’s capital with visits to the ultan's Deli Palace and the Great Mosque. A
09-19-2008 | Energy & Environment
ProFauna Indonesia
ProFauna Demands for the Illegal Wildlife Trade in Sumatera to Stop
The illegal wildlife trade is rampant in Sumatera Island; Lampung, Palembang, Bengkulu, Riau, Medan, and Aceh regions, according to a recent investigation conducted by ProFauna Indonesia in collaboration with the International Fund for Animal Welfare (IFAW) in 2007. Thousands of wild animals are caught from the wild in the Island to supply the domestic and international illegal wildlife trade. Unrestricted international trade in wildlife and wildlife products threatens many species or
06-15-2007 | Media & Telecommunications
AdCom Dua Dua, PT
Trikomsel & Carrefour Launches Carrefour Isi Pulsa
Jakarta, 14 June 2007 –PT Trikomsel Multimedia ( Trikomsel ), one of major players in telecommunication market celebrates its five years partnership with PT Carrefour Indonesia ( Carrefour ), a fast growing modern retail with branches spread in strategic locations all over Indonesia. At the earlier partnership, Trikomsel act as supplier of telecommunication products from several vendors and operators who appointed Trikomsel as their sole agent. The partnership keep growing in
Comments about openPR
9 o'clock: discuss press release with client, 10 o'clock: submit release to openPR, within the briefest possible time release is published and displayed in a prominent place on openPR.de. I am thrilled!
Zehra Spindler, Calypso Now! - Communication Agency