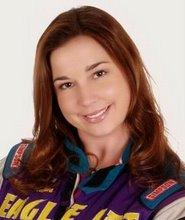 Tampa, FL – Florida pavement open wheel standout Wendy Mathis recorded her best finish of 2008 with a podium finish with the TBARA series – widely recognized as Florida's premier asphalt touring series. This past weekend represented back-to-back nights of racing at completely different styles of tracks. While Orlando Speed World is more of a bullring, New Smyrna Speedway is a horsepower track. Friday night got off to a rough start and Wendy almost hit the wall in practice when the right front brake caliper decided it didn't want to cooperate with her. This set the team back and Wendy had to start shotgun on the feature Friday night. “"We started eighteenth and finished twelfth,” said Mathis. “While not the greatest result in the world, by the end of the night the car came around to me and the changes we made to the setup really had a positive impact.” Undaunted, the team packed up and headed to New Smyrna Beach on Saturday, confident that they had found something in the setup of the car that would yield better results on Saturday. "Starting on the pole for my heat race was great and I got a fantastic start," continued Wendy. "We made a gear change after practice and it gave me just what I was looking for and the car felt great but still pushed a little bit coming out of turn four. Another car got by me in the end, but I was very happy with second in the heat race." Starting on the pole for the feature, when the green flag flew Wendy dropped the hammer and took off. "I got a great start and after I got some heat in the tires, the car felt fantastic, especially through turns three and four," continued Wendy. "A late caution had us sitting pretty, but unfortunately Dude Teate drove in too deep and ran out of brakes and used my car to slow his down. The result was a bent left rear rim for me, which didn't feel very good under caution, but I was not going to slow down for anything." On the final restart Wendy got a great start and fended off a challenge from Mark Gimmler to come home third. "This is our best result in quite some time and I cannot be more proud of my family,” continued Mathis. “We all really came together as a team this weekend, had great communication and worked through our problems with the car. It's no secret we are up against much better funded teams, but tonight we showed that we can outsmart the best of them and run at the front where we belong. I've been telling everyone that 2008 is going to be a different story for Wendy Mathis Racing and tonight we showed it!" Wendy proudly endorses Bell Safety Products, K&N Filters, Kendall Motor Oil and Lubricants and is also a spokesperson for the Race Against Drugs program and the Sprint Car & Midget Magazine's Stay in School Program. Wendy is also sponsored by JB Banta Logistics. Company Information: Wendy Mathis Racing PO Box 89083 Tampa, FL 33689 Press Contact: Todd Michaels wendymathispr@gmail.com 407-756-9698 www.wendymathisracing.blogspot.com In 1993, Wendy Mathis became the first female to win the Florida State Quarter Midget Championship. Since 2001, she has competed in the TBARA Sprint Car Series, collecting two feature wins. For 2009, we're putting together sponsorship packages to run the Indy Pro Series ovals or selected events in the ARCA RE/MAX Series.

07-19-2016 | Energy & Environment
Client Focused Media
North Florida Land Trust releases Preservation Portfolio
North Florida Land Trust has finalized a major project that identifies the most valuable land in North Florida. The Preservation Portfolio identifies the most valuable 112,346 acres of land in their seven county focus area that are in critical need of preservation. Among other benefits, these lands provide the water we drink and the air we breathe, provide needed fisheries, prevent flooding, provide recreational opportunities and are critical to maintaining
09-25-2013 | Business, Economy, Finances, B …
Hurricane Grill & Wings
Hurricane Grill & Wings Continues Growth In Florida
Award-Winning Franchise Debuts First Restaurant In Sarasota WEST PALM BEACH, Fla. (September 24, 2013) – Hurricane Grill & Wings® will be opening in Sarasota at the Westfield Sarasota Square Mall. Hurricane Grill & Wings continues their expansion with the 36th location in the state of Florida. The restaurant is committed to its tradition of bringing the island-inspired restaurant concept and its awarding-winning fresh jumbo wings with over 30 sauces and rubs
03-05-2012 | Health & Medicine
Recovery First
Top Florida Drug Rehab Produces 500th Article
Recovery First's Florida drug rehab center announced the production of its 500th article related to addiction and alcoholism this week. The rehab center reported that it began producing professional articles to help patients and their loved ones understand the disease of addiction and be better prepared to receive effective treatment, but never expected to become a leader in published addiction information. Jim Davis, CEO and founder of the
11-30-2011 | Fashion, Lifestyle, Trends
A New Day Rehab in Florida
A New Day Rehab in Florida
Florida, November 26: A New Day Rehab is a drug and alcohol addiction treatment center that provides a safe and secure setting for patients, which gives peace of mind to start a new life. A New Day Rehab offers a cost effective Drug rehab in Florida and alcohol addiction treatment that are tailored to meet the addicts needs. The rehab is set in a serene atmosphere in oceanic surroundings. Addicts
05-24-2011 | Business, Economy, Finances, B …
Careercollege
Florida Business Schools
Florida Career College is understood to possess one main purpose, its commitment to Education. The main focus at Florida Career College is educating and preparing its students for that role that they will play in society. Many believe that a standard high school education is not enough to secure a job placement and thus Florida Career College is an ideal example of a facility where a non-traditional post-secondary education could
01-27-2011 | Advertising, Media Consulting, …
Career oriented training with Florida Health College
Career oriented training with Florida Health College
It's recognized that Florida Career College's commitment to Education is its main objective. The main focus at Florida Career College is educating and preparing its students for the role that they should play in society. If it really is your perception that a school education education is therefore not adequate to obtain an edge in the present workplace, it follows that The College should be the best place
Comments about openPR
9 o'clock: discuss press release with client, 10 o'clock: submit release to openPR, within the briefest possible time release is published and displayed in a prominent place on openPR.de. I am thrilled!
Zehra Spindler, Calypso Now! - Communication Agency